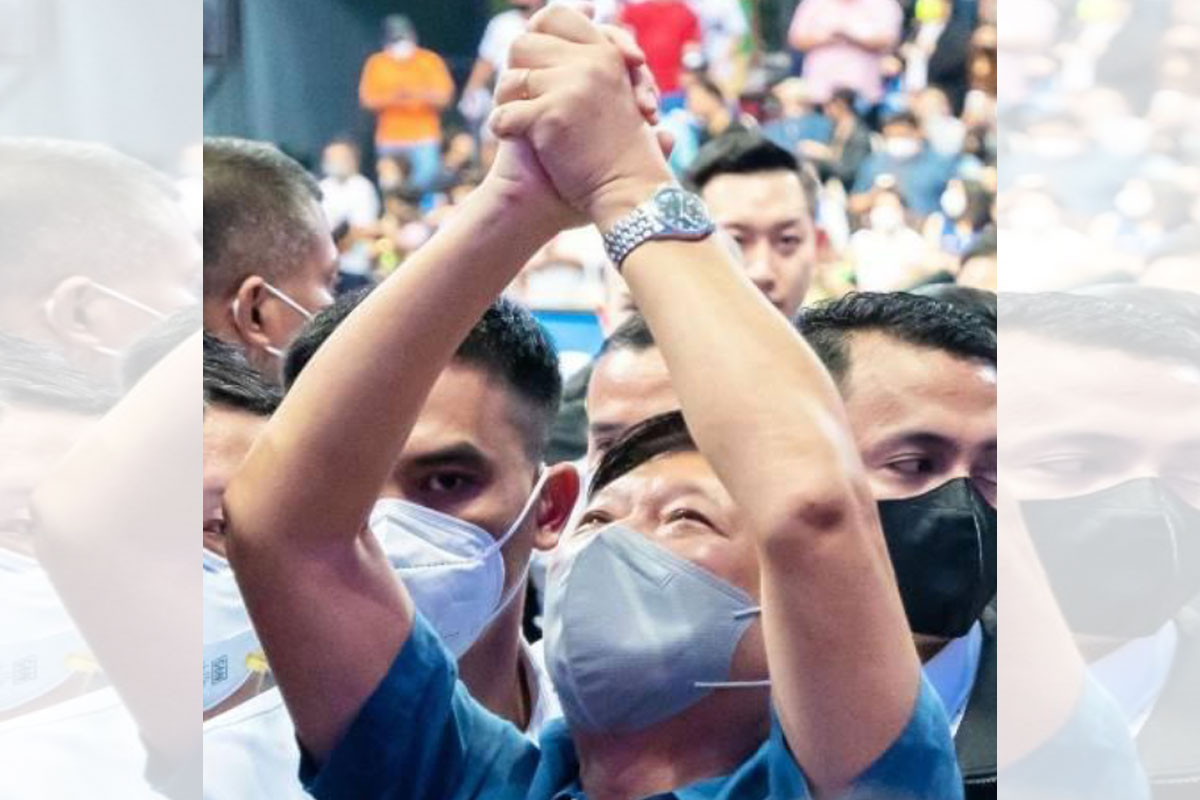 NUMBER 1 FAN — President Ferdinand Marcos Jr. leads the crowd of about 19,000 who cheered for the Gilas Pilipinas team at the FIBA World Cup Qualifiers at Mall of Asia Arena in Pasay City on Monday night (Aug. 29, 2022). Gilas scored an 84-46 win against Saudi Arabia. (Photo from Bongbong Marcos Facebook)
Basketball,

Over win vs Saudi Arabia

Marcos, who was among the crowd who cheered for the team Monday night, took to Twitter to congratulate Gilas after its 84-46 win at Mall of Asia Arena in Pasay City.

He expressed confidence that the team would continue to bring pride and honor to the country.

“Kumpiyansa tayo na gagawin nila ang lahat ng kanilang makakaya para makapagdala ng karangalan sa bansa (We are confident that they will do everything to bring pride to the country),” Marcos said.

Marcos arrived during the third quarter and stayed until the Philippines’ won.

Also posted on his Twitter and Facebook accounts were several photos of him taken during and after the game.

Meawnhile, Senator Christopher Lawrence Go said he will discuss with players, organizers, coaches, and sports officials how the government could help in the preparations for the hosting of the FIBA World Cup next year.

Go, who chairs the Committee on Sports, recently filed Senate Resolution 83 that seeks to conduct an inquiry in aid of legislation on the ways to fully support the Philippine basketball team in future international competitions and “look over the preparations being done by the concerned offices and or agencies for our hosting of the 2023 FIBA World Cup.”

“Titignan natin kung paano tayo makakatulong na palakasin pa lalo ang ating sports programs, lalo na sa basketball na hilig talaga ng mga Pilipino (We will check how we can help strengthen our sports program, especially in basketball, which is a passion for many Filipinos). For so many years, our national teams have brought pride and honor to our country. So, we want to make sure we can keep on improving,” he said in a statement on Tuesday.

The Senate aims to review laws and policies to ensure optimal performance in future international sports competitions and further protect the welfare of Filipino athletes, he added.

Go was also at the Gilas game, along with Senators Ronald dela Rosa and Francis Tolentino.

Senator Sonny Angara sees the hosting as a stage for the country to showcase itself as both “a hoops-loving nation” and a destination for tourism but noted that a lot of preparations still need to be done.

“The last time we hosted this event was in 1978 so this is something that all Filipinos are looking forward to, both as a recognition of the Philippines as one of the biggest markets for the sport and the commitment of the government to open its doors once again to the world,” Angara said in a separate statement on Monday.