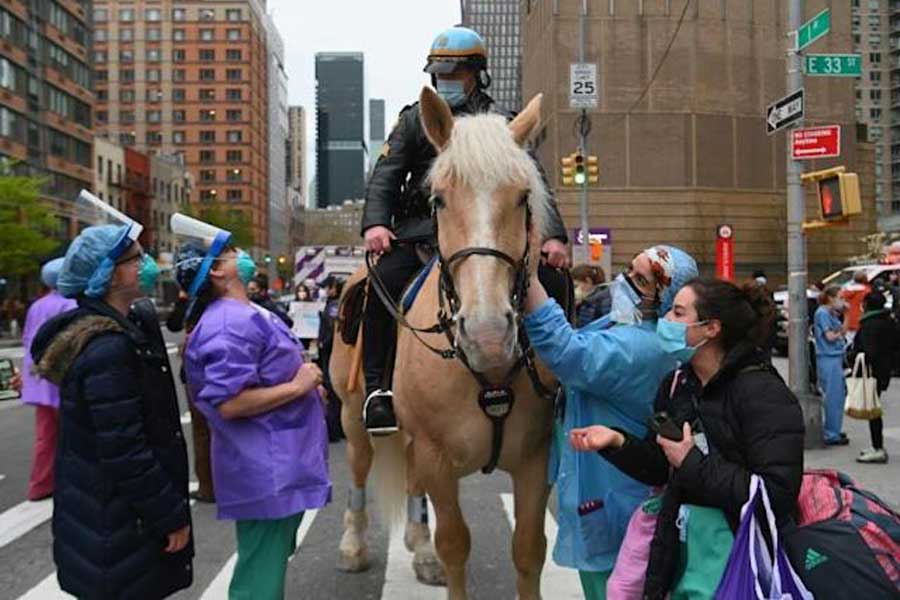 AFP, June 15, 2021 — New York is to stage a ticker-tape parade to pay homage to essential workers who have distinguished themselves during the coronavirus pandemic, Mayor Bill de Blasio announced on Monday.

In grand New York City tradition, the procession will roll out at the south end of Broadway in Manhattan, also known as the Canyon of Heroes, on July 7.

The event is about celebrating “the people who kept us alive, that helped to keep this city going no matter what,” de Blasio told reporters, hailing “the heroes who often go unsung.”

The announcement came with 64.8 percent of adults having received at least one dose of Covid-19 vaccine in New York.

The statewide positivity rate — the proportion of tests coming back positive — fell on Monday to 0.59 percent, the lowest since the authorities began recording the data.

The US financial hub of 8.4 million people has seen more than 33,000 deaths related to Covid-19 during what de Blasio described as “the biggest crisis in the history of New York City.”

“We were knocked down but we got back up and that’s something to celebrate about this city,” he said.

The first New York ticker-tape parade — held in 1886 to mark the dedication of the Statue of Liberty — passed through Wall Street, where financial workers threw rolls of paper showing stock prices.

What looked like a shower of confetti has since become a tradition for subsequent parades, which have honored government leaders, religious dignitaries, military chiefs, sports figures and celebrities of all strip

Biden promises to lay down ‘red lines’ to Putin