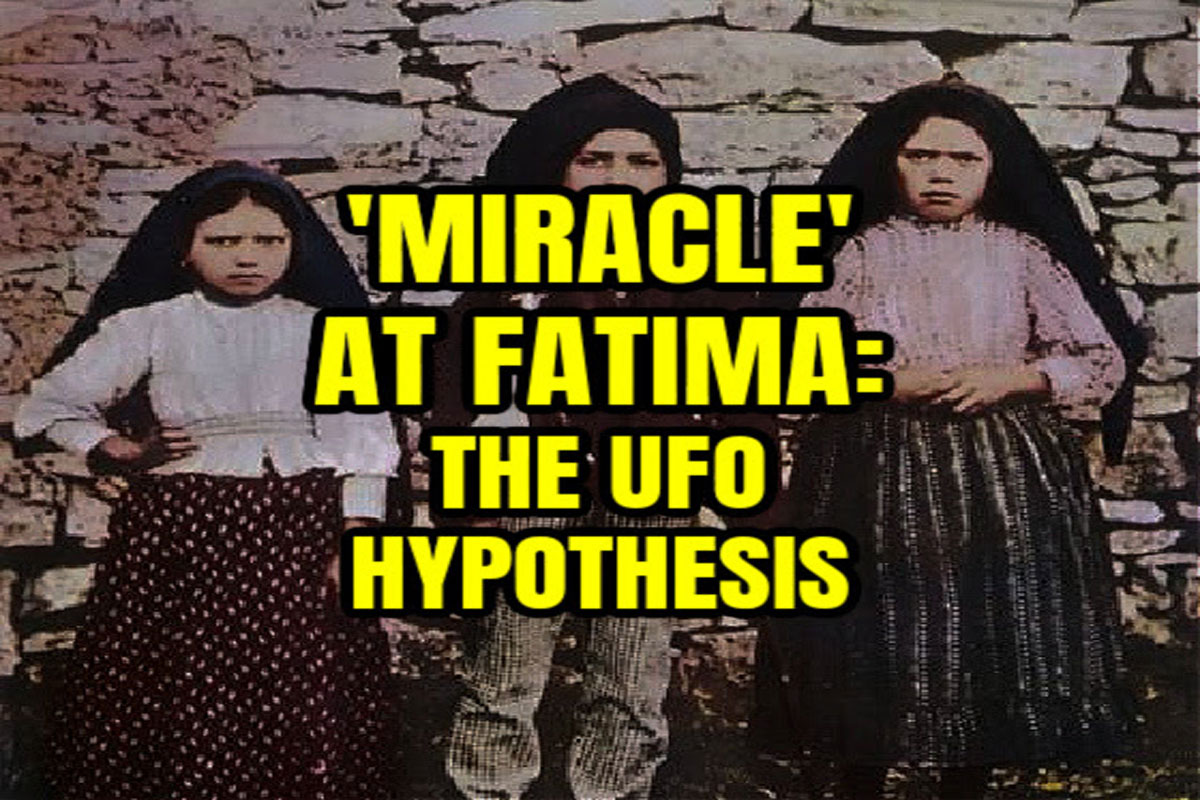 ‘Miracle’ at Fatima: The UFO Hypothesis 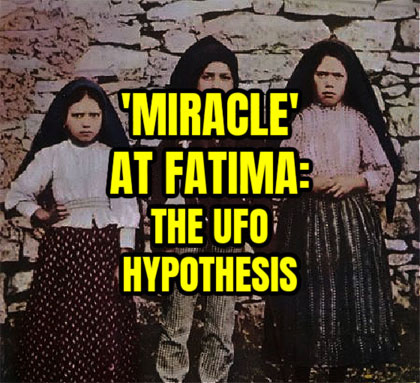 The late author and investigative journalist Philip Coppens posted an intriguing article in 2012 about the apparition of the Virgin Mary at Fatima and his theory that the Catholic Church, through a series of manipulations, created one of the most elaborate historical lies that formed the backdrop of major political events. Below is the preamble to his article:

“In the last two centuries, the Church has made apparitions of the Virgin Mary an evermore important part of the Christian religious experience and doctrine. Some critics argue the popularity of the Catholic Faith is largely maintained by the popularity of the Virgin Mary. The so-called “Marian Era”, i.e. the period when the Virgin Mary began to appear and offer messages to those that saw her, began in the early 19th century, with a series of apparitions, of which Lourdes is no doubt the most famous. But the most intriguing apparition occurred in the early 20th century, in the Portuguese hamlet of Fatima.

The Virgin Mary is said to have appeared at Fatima six times, starting on May 13, 1917, with a final apparition on October 13, 1917, when she performed a great sun miracle, “which all shall see so that they may believe”. On the second or third apparition, the three young witnesses were allegedly given three secrets by the Virgin Mary. Two secrets were revealed in subsequent years, but the so-called “Third Secret of Fatima” was kept secret by the Vatican for almost a century. As a result, there was endless speculation about the nature and its importance. Rightfully so, as the Second Secret was linked with major political events of the 20th century. But what if all of these “secrets” were fabricated by the Vatican, for political and religious reasons?” – The Lies of Fatima 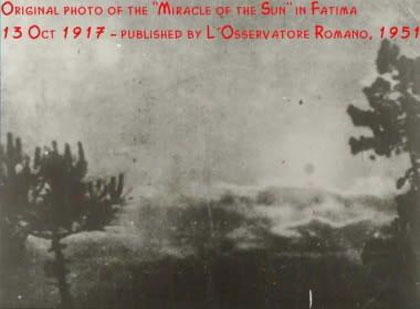 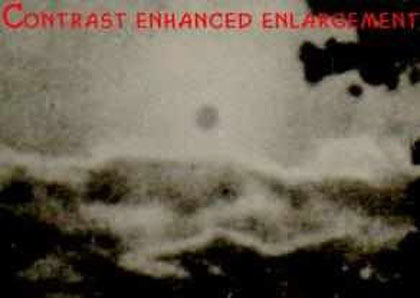 Regardless of Coppens’ hypothesis, the event on October 13, 1917 was an anomaly caused by ‘something’ supernatural. It was referred to as ‘The Miracle of the Sun’ in which 30,000 to 100,000 people, who were gathered near Fátima, Portugal, claimed to have witnessed extraordinary solar activity. But what could it have been?

French-born venture capitalist, computer scientist, author, ufologist and former astronomer Jacques Vallée is notable for co-developing the first computerized mapping of Mars for NASA and for his work at SRI International in creating ARPANET, a precursor to the modern Internet. Along with his mentor, astronomer J. Allen Hynek, Vallée carefully studied the phenomenon of UFOs for many years and served as the real-life model for the character portrayed by François Truffaut in Steven Spielberg’s film Close Encounters of the Third Kind.

Vallée contributed to the investigation of the Miracle at Fatima and his work has been used to support the Fatima UFO Hypothesis. Vallée is one of the first people to speculate publicly about the possibility that the “solar dance” at Fatima was a UFO. The idea of UFOs was not unknown in 1917, but most of the people in attendance at the Fatima apparitions would not have attributed the claimed phenomena there to UFOs, let alone to extraterrestrials. Vallée has also speculated about the possibility that other religious apparitions may have been the result of UFO activity including Our Lady of Lourdes and the revelations to Joseph Smith. Vallée and other researchers have advocated further study of unusual phenomena in the academic community. They don’t believe that this should be handled solely by theologians.

Professor Joaquim Fernandes, PhD in History at the University of Fernando Pessoa, Porto, Portugal completed research on the Fatima Cult linking it to UFO phenomena or to put it simply suggesting that the key event relating to this saga was extraterrestrial. Professor Fernandez was a key contributor to a series of books on the topic.

In December 2009 Professor Fernandez stated the following in a telephone interview:

What led you to research the Fatima Apparitions?

“For a long time the Fatima Apparitions story was considered controversial and a lot of authors and thinkers thought that they were supported more by political than religious reasons and motivations. Then, we look to question what really had happen there by accessing the original archives and documents.”

What kind of difficulties and obstacles did you find during the research?

“The main obstacle was to access the Fatima sanctuary documents, namely the so-called Formigao archive that were classified until the end of the 1970’s when we proposed to study them.

Following having the chance to read them, one of the authors (Fina d’Armada) was badly punished in her professional career.”

Did you find any kind of surprises there?

“The main surprise was that the extraordinary events could not have been invented. In our opinion they occurred in fact. But as more of the original documents emerged the more the events were mimetic of the ufological phenomena. Another surprise was the certification that Canon Formigao had modified the first historical description of the Fatima “Lady”: a little girl with a skirt to her knees he changed to an adult lady with a long and shining skirt. We also discovered that the image that the people can see today ay the Sanctuary was inspired by an old image of the previous cult of Senhora da Lapa Lady. But, more surprising was finding witnesses that described the so-called “Sun Miracle” as a “disk-like metal object” with equidistant lights in the periphery, like the classical hard daylight UFO cases.”

How did Catholic believers and the religious authorities react?

“As a lot of us are grounded in “belief systems” and have a deep supernatural dependence many believers did not read our books. Others linked their supernatural needs directly and exclusively with Fatima and are happy with their simplistic faith while not knowing the details of the Fatima events. Others read the books with a critical mind or react with perplexity or deny all in the name of their faith. Then, a lot of members of the Catholic Church hierarchy avoid discussing our views since they also need Fatima to keep on as a major financial source.”

Do you plan to continue looking for new clues to the Fatima events?

“We keep always in our minds the urgency to rethink religious personal experiences, like the “Marian apparitions” as a syndrome that calls for a deeper and deeper interest and research to find its origins and ways of expressions as a part of the Extraordinary Human Experiences in its totality. So, the different scientific disciplines and other cultural paranormal approaches must give attention to this aspect of popular religion. Also, we urge the experimental and theoretical experts to look at these rich documents that we think can be a good exercise to discover and understand how our brain and spirit can be stimulated to surpass the ordinary limits of human perception, “tuning” new extensions of the consciousness.”

Along with the investigations of Vallee, Fernandes and d’Armada several other researchers have written papers supporting the Fatima UFO hypothesis, including…

“Not only was a flying disc or globe consistently involved, but its motion, its falling-leaf trajectory, its light effects, the thunder-claps, the buzzing sounds, the strange fragrance, the fall of “angel hair” that dissolves upon reaching the ground, the heat wave associated with the close approach of the disk – all of these are frequent parameters of UFO sightings everywhere. And so are the paralysis, the amnesia, the conversions, and the healings.” – Jacques Vallee Ph.D. 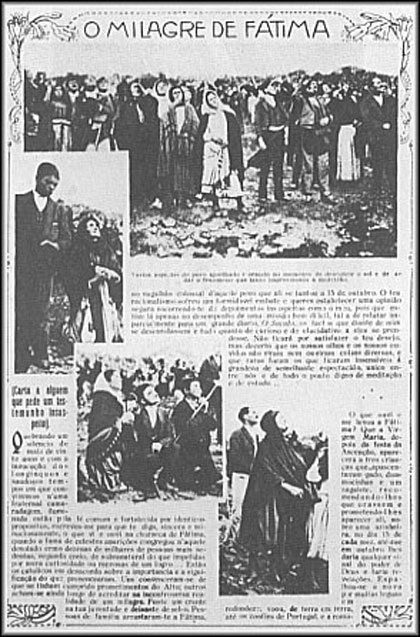 Bizarre Things That Happened On The Set Of The Omen