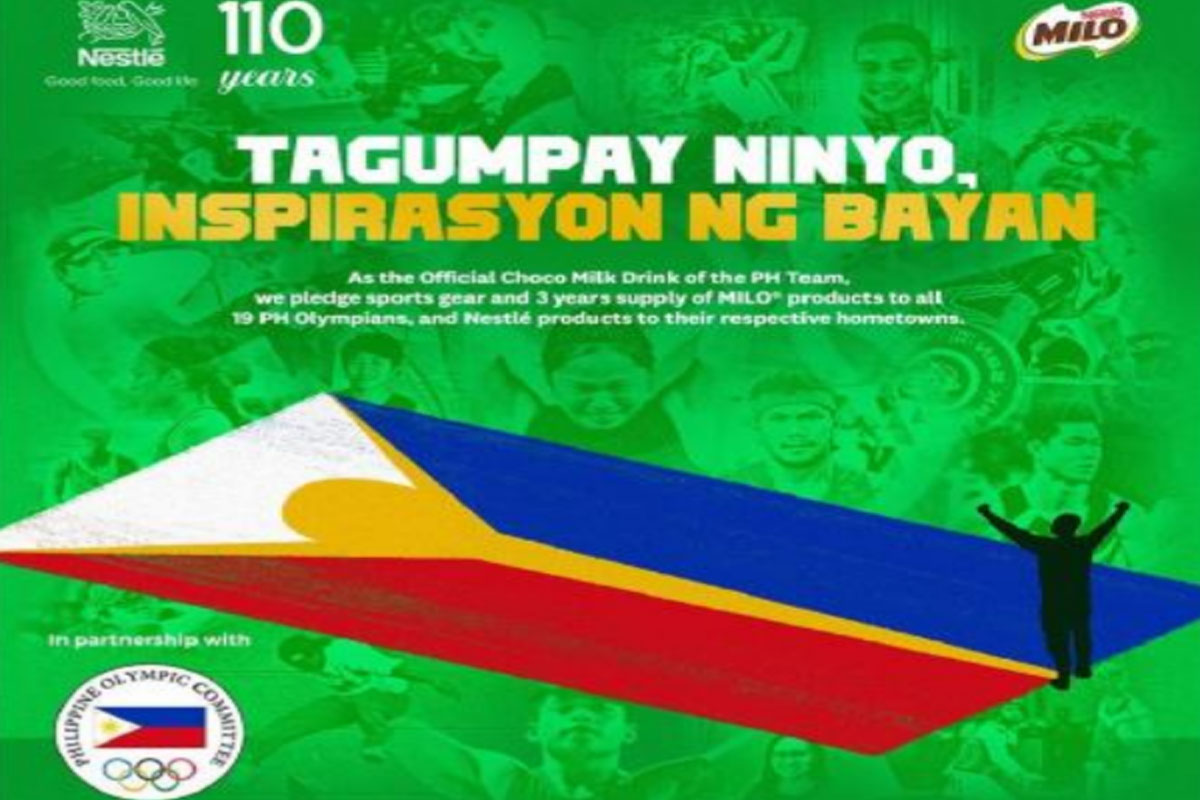 MILO, the official choco milk drink of the Philippine Olympic Team, announced that the hometowns of all 19 Philippine Olympians of the recently- concluded Tokyo 2020+1 Olympics will be receiving Nestlé products as a show of gratitude and appreciation for the athletes’ showcase of champion energy and for bringing the best Olympic performance ever recorded in history.

After capturing its biggest medal haul with one gold, two silvers, and one bronze, the Philippines is ranked the top-performing Southeast Asian country in the Tokyo Olympics.

In recognition of their historic contribution in Philippine sports, MILO will pledge Nestlé products to the respective hometowns of all 19 Olympians from Luzon, Visayas and Mindanao, in the hopes of inspiring more children to follow their kababayan’s footsteps to pursue their champion dreams. Additionally, each delegate will receive sports gear and a three years’ worth of MILO products.

“We at MILO are extremely proud of every one of our athletes for raising the country’s banner in the biggest sporting event in the world,” said Lester P. Castillo, Assistant Vice President, Nestlé Philippines-MILO.

“Ang kanilang tagumpay ang nagsilbing inspirasyon sa ating bayan. We have witnessed from the Games that sports is truly a great life teacher; through grit, perseverance, and discipline, one can reach their dreams and ambitions. Guided by these values, our athletes have done so much to achieve this epic moment in our history and it is only right that they be rewarded for their hard work and dedication.”

Throughout the Olympic campaign, MILO has been working closely with the Philippine Olympic Committee (POC) to support the country’s representatives.

MILO and POC have been collaborating through the years in uplifting Philippine sports through various programs and initiatives.

Earlier this year, the two parties renewed their partnership with a four-year pact to support homegrown athletes and accelerate grassroots sports in the long term.

On Olympic Day celebrated last June, POC has partnered again with MILO for the Living Archive of Olympians PH website, a live catalog of past and present Olympic athletes that aims to inspire the next generation of Olympians.

Among the athletes featured in the website are MILO ambassadors and champions such as Akiko Thomson-Guevara, the President of the Philippine Olympians Association (POA), who competed in the Olympic Games in 1988, 1992, and 1996.

“The renewed support of MILO is a welcome view,” POC President Abraham “Bambol” Tolentino said in a speech during the Living Archive of Olympians PH virtual launch.

“We are indeed happy and grateful, because it is MILO itself who have been our sports icon since our youth…that is the reason why MILO is the most fitting partner for this endeavor.”

For more than 55 years, MILO has supported the Philippines in its Olympic journeys.

Apart from its ongoing initiatives, MILO, along with its partners such as the POC, will endeavor to come up with more programs to further support athletes.

“We congratulate and thank all the athletes, the coaches and the people behind Team Philippines for making this the best Olympics yet,” said Castillo. “They have indeed been a great inspiration to us in pursuing our goals to become champions in life.”

Hontiveros: Let’s win as one again in Paris

SEAG medallists at Sports on Air
May 21, 2022 Robert Andaya