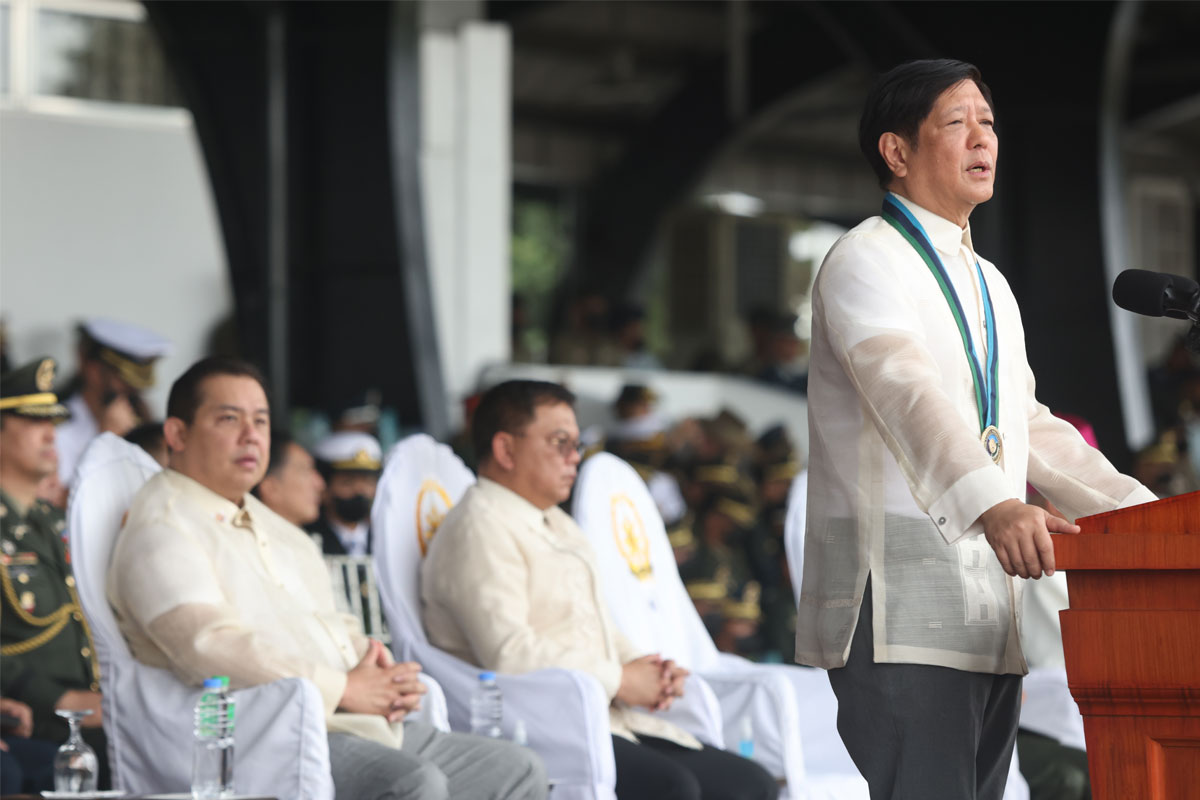 PRESIDENT Ferdinand R. Marcos Jr. on Monday urged the Armed Forces of the Philippines (AFP) to remain committed to their mandate of sustaining peace and security in the country.

“My marching guidance has always remained constant: we commit to the cause of peace. The security and stability of the country remains the priority,” Marcos said in his speech during the 87th anniversary celebration of the AFP at Camp Aguinaldo in Quezon City.

“I call on you to continue performing your duties as you have had for many many years, and competently so that our country can achieve peace and security and sustain economic prosperity,” he added.

Marcos assured the AFP and other uniformed personnel of his administration’s commitment to its modernization programs aimed at acquiring more equipment for external defense and their other needs.

“Hindi lingid sa aking kaalaman ang sakripisyo ng ating hukbo at ang panganib na kanilang hinaharap sa tawag ng tungkulin kaya naman bukod sa kagamitin, patuloy nating susuportahan ang kanilang pangangailangan (I am not oblivious of the sacrifice of our army and the danger they face in the call of duty, that is why apart from equipment, we will continue to support their needs),” he added.

He also thanked the AFP’s “unwavering loyalty and service” to the country and people.

The Commander-in-Chief cited how the AFP played a crucial role in assisting the government in the fight against terrorism as well as the Covid-19 pandemic.

“Through your efforts, along with other law enforcement authorities and government agencies, we now see a significant decline in their numbers, and that you have helped to pave the way for development to foster and for communities to live in peace,” he said.

Marcos recognized the armed forces’ support to humanitarian assistance and disaster response efforts through mobilizing assets and the immediate deployment of personnel to save lives.

“The world we live [in] has changed. Apart from climate change related disasters, we are now confronted with the different and complex security environment. It brings with it new challenges that require us to adapt,” he said.

He also lauded the AFP for sustaining your existing defense and security engagements while exploring new areas for cooperation with your counterparts overseas.

“New security challenges do not recognize borders and we must continue to work with our neighbors, our allies, partners and friends to address mutual security concerns,” he added.

During the event, Marcos witnessed the static display as well as parade and review of the AFP’s air and ground assets and awarded military officers and civilian employees for their exemplary contributions to the armed forces.

Bearing the theme, “AFP @87: Kaisa ng Buong Sambayanan Tungo sa Mapayapa, Matatag at Maunlad na Pilipinas”, this year’s anniversary celebration aims to showcase and highlight the AFP’s “transformation and advancement as a military organization through the display of assets”.

Different activities will be organized nationwide to honor the decades-long service of the AFP to the country including bloodletting programs, tree-planting events and free museum visits in military camps, among others. Philippine News Agency