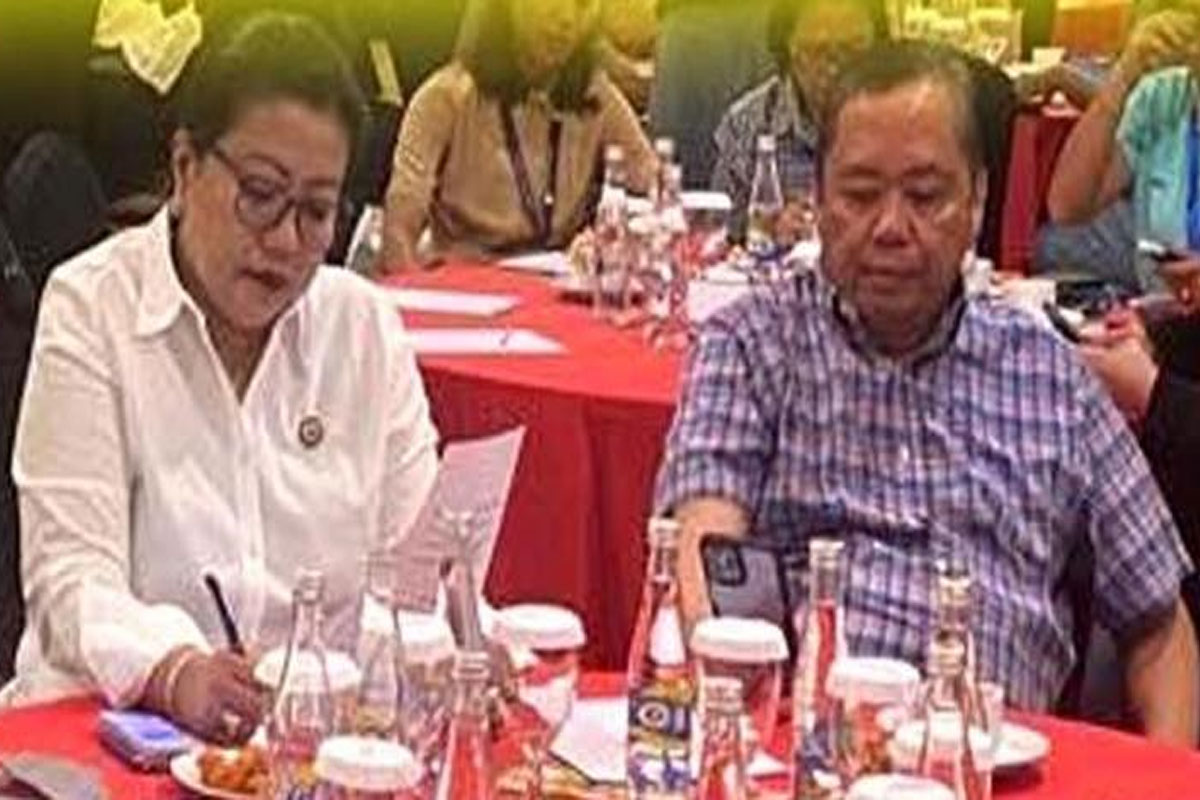 Batangas 2nd District Rep. and House Committee on Tourism Vice Chairman Atty. Gerville “Jinky Bitrics” R. Luistro is shown at work together with former Mabini Mayor Noel Bitrics Luistro in Bali, Indonesia. Other photo shows the Batangas solon and the former mayor together with the ASTINDO delegates during a courtesy visit to the Philippine Embassy in Indonesia.
Provincial, 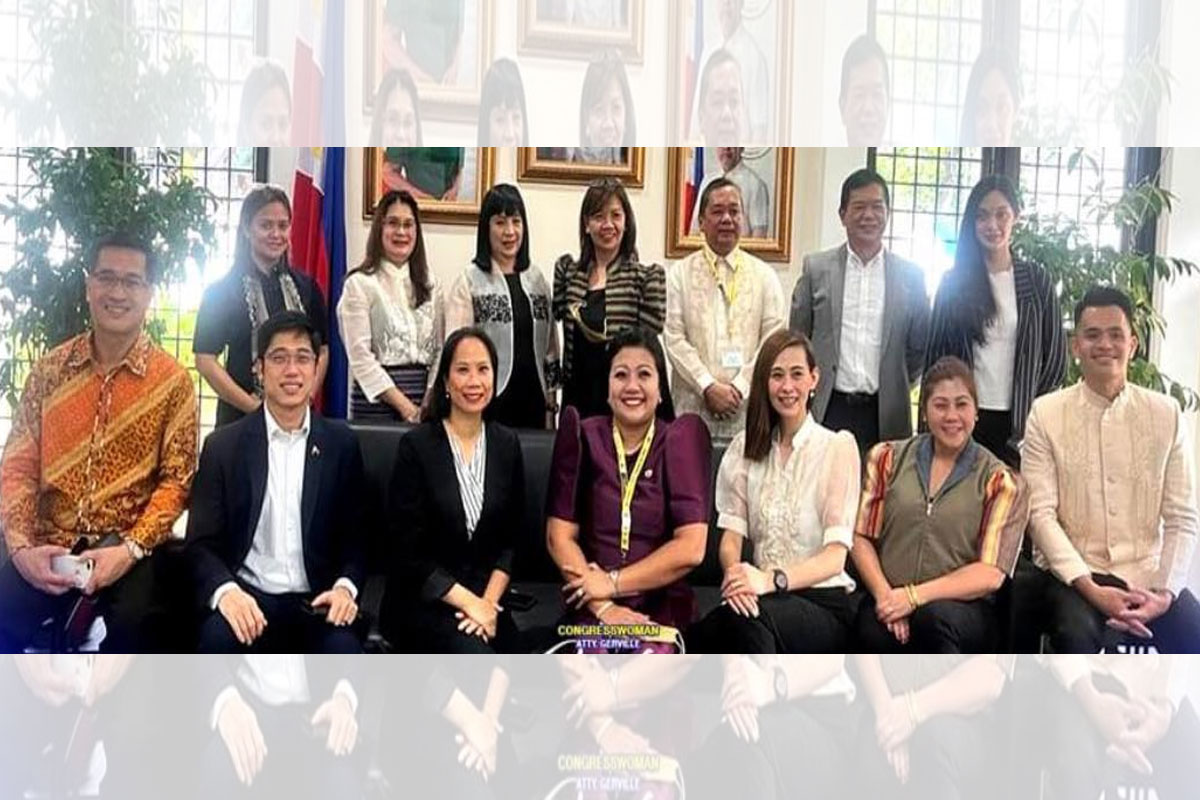 THE 2nd District of Batangas will continue to view Indonesia at the top of the pedestal – as a respected and revered, older brother.

Thus assured 2nd District Rep. and House Committee on Tourism Vice Chairman Atty. Gerville “Jinky Bitrics” R. Luistro as she took the Association of Travel Agents in Indonesia (ASTINDO) Philippines on a virtual tour of the 10 Best Travel Destinations in the Philippines for 2022 during the much-anticipated ASTINDO Philippines Three-City Road Show in Indonesia.

This as Luistro, in her speech, assured that

The following is Luistro’s speech:

“To His Excellency, the Honorable President Joko Widodo of the Republic of Indonesia, thank you for recognizing the kinship of Indonesia and the Philippines in the ASEAN region. With Indonesia sitting as the de facto leader of the Association of Southeast Asian Nations (ASEAN) at the helm of your presidency, rest assured that the 2nd District of Batangas, Philippines, through this humble representation, will continue to view Indonesia at the top of the pedestal – as a respected and revered, older brother.

To the Honorable President of the Republic of the Philippines, President Ferdinand “Bongbong” Marcos, Jr.; To the distinguished House Speaker of the 19th Philippine Congress and 1st District Representative of Leyte, Philippines, Honorable Ferdinand Martin Romualdez; To the Chairman of the House Committee on Tourism, and Lone District Representative of Romblon, Philippines, Honorable Eleandro Jesus Madrona; To the Department of Tourism (DOT), through the esteemed Secretary Christina Frasco; the DOT-Head Office delegation led by Usec. Verna Buensuceso of the Tourism Development and Planning Office; Director Paulo Tugbang of the OPMD (or the Office of Product and Market Development), Market Development Head Buena Zaldivia of the OPMD-MDD Indonesia; Tourism Operations Officer Micah Marie Sales of the OPMD-ASEAN, Tourism Operations Officer Maria Christina Chiuco of the DOT-Legislative Liaison Unit; our representatives from the Philippine Tourism Regional offices: Director Sharlene Batin of DOT-NCR, Mr. Mario Daga of DOT IV-A, Ms. Jay De Guzman of DOT IV-B, Ms. Judy Gabato of DOT VII, and Ms. Judy Colaljo of DOT XI, esteemed colleagues, guests, and friends, I am beyond grateful for the opportunity you have extended and for being able to actively take part in the much-anticipated Association of Travel Agents in Indonesia (ASTINDO) Philippines Three-City Road Show here in Indonesia.

Indubitably, the Philippines and Indonesia have, indeed, found ways to further strengthen diplomatic ties since the 24th of November, 1949. As the 8th largest trading partner of the Philippines in 2021, Indonesia, has been providing impactful contributions to the welfare of millions of Filipinos around the globe. With USD9.5 billion, as the total trade value in 2021, an import value of USD1.2 billion, and an export value of USD8.6 billion, Indonesia enjoys the Philippine recognition as one of its most important and strategic trading partners in bilateral, regional, and multilateral transactions.

Hence, we remain joyful that, as neighbors and fellow ASEAN members, our leaders continue to religiously seek beneficial ways to bolster and even promote our decades-long partnership. As we gently move towards the post-pandemic era, we would want to ensure that economic plans are well-mapped, calculated, cautiously crafted, and more so, sustainable. With the successful project implementation of ASTINDO, we are able to jump-start a great kick-off run for the Philippines and Indonesia in the international market for trade and tourism advancement.

Suffice it to say, Philippines and Indonesia, among other countries that maximize inherent geographic location, remain tailor fit in undertaking crucial steps for effective national economic recovery through efficient utilization of one of its core assets – tourism. With the support of Indonesia, the Philippines remains confident, with its astounding natural wonders and astonishing picture-perfect sceneries, that it can stand unshaken and unbothered at the middle of international spotlight, together with the world’s best and highly-regarded tourism sites.

The famous Anilao and the VIP are just two of the most popular tourist destinations in the Philippines. Anilao is situated in the town of Mabini where I originated. Likewise, it is with great pride to share with you that I am the wife and the then municipal administrator of former Mabini Mayor Noel B. Luistro who is also with us today.

Anilao, Mabini is located at the southern tip of the province of Batangas. It is constantly visited by foot and vehicular traffic as it provides accessibility to other prominent tourist spots in Batangas.

Internationally renowned for its crystal-clear and deep-blue waters, presence of abundant, marine and aquatic life – with rare species of flora and fauna – Anilao has become the “Birthplace of Scuba Diving in the Philippines”.

As Anilao slowly begins to receive global interests for its stunning, natural beauty, the Verde Island Passage (the VIP), a marine corridor at the center of global marine diversity, has already attracted the admiration, not just of the tourists, but also, the attention of scholars, conservationists, marine biologists, and scientists. With its exquisite landscape, topped with sprawling underwater wildlife, the VIP stands with an unfathomable view of supernatural artistry. As globally renowned, the heart of the world’s underwater lies within the Coral Triangle. This is situated in the underwaters of the Philippines, Indonesia, Malaysia, Papua New Guinea, Solomon Islands, and Timor Leste. And at the heart of this Coral Triangle lies the famous Verde Island Passage (VIP).

Bound by the provinces of Batangas, Occidental Mindoro, Oriental Mindoro, Marinduque, and Romblon, the VIP houses a multitude of marine sanctuaries and marine protected areas. In 2005, IUCN Global Marine Species Assessment Coordinator Dr. Kent Carpenter and Victor Springer of the Smithsonian Institute gave VIP its remarkable distinction of being the “Center of the Center of Marine Shorefish Biodiversity of the World” – with around 1,736 overlapping marine species in a 10-kilometer area, the highest concentration of marine life in the world.

Indeed, the VIP and Anilao are just a handful among the Philippines’ finest. If I may, I wish to take ASTINDO on a virtual tour on the 10 Best Travel Destinations in the Philippines for 2022, as penned by Ram Mancelita of Vismin Philippines:

a) the Home of the Wind, Batanes; boasting its New Zealand-like scenery and unique Ivatan dishes;

e) the tropical island of Coron, Palawan; known for its rock formations and wrecks from the World War II and different limestone karst landscapes that go well with the crystal-clear water of the lakes;

f) The Heaven on Earth, El Nido, Palawan; known for its big and small lagoons, and secret limestone beaches;

g) The Home of the Whale Sharks, Oslob and Moalboal, Cebu; with the beautiful sandbars of Oslob, take a swim with millions of Sardines in Moalboal;

h) The Home of the Cliffs with a sea of clouds, Sagada and Banaue; spelunk at Samaguing cave, sea cloud sighting and camping at Kiltepan Peak and Marlboro Hills;

i) The Mystical falls and cave beaches of Siquijor; and,

j) The Surfing Capital of the Philippines, Siargao.

Apart from these God-given wonders, the Philippines also boasts, among others, these historical tourist spots: the country’s capital, Manila. With its rich historical value that has outlived the pre-colonial times, Manila remains perfectly intact to feature the likes of Intramuros, the historic, walled city at its heart that predates to the Spanish era, and the 415-year-old, baroque San Agustin Church that has witnessed the 400 years of Spanish rule in the country. The church is an inscribed UNESCO World Heritage Site in 1993. Also included in the list is the country’s investment haven, Davao. Filled with deep, consequential stories that have been thriving from generation to generation, the King City of the South Davao is also the home to the breathtaking Samal Island, the largest resort in the country; the incredible Monfort Bat Sanctuary that houses 2.3 million Rousette Fruit Bats (the largest colony in the world), and the Philippine Eagle Center, which nests at the heart of Davao’s rainforest. The Philippine Eagle, also known as the monkey-eating-eagle, is the largest eagle in the world in terms of overall wingspan and length.

Come and visit the Philippines – the place where you would always rather be.

To this end, the honor remains ours for being able to present to you the home that defines our being, shapes our character, and molds our views. As we enjoy the cold breeze of December to February; kite-flying in the windy airs of March and April; spear-fishing in the warm waters of May; dark-coffee brewing with the rains of June to November, be amused with the natural wonders that naturally made the Philippines beyond naturally wonderful. Come and visit the Philippines.

To the Philippine Embassy in Jakarta and the Philippine Consulate in Manado, and to all tour operators, travel agencies, and tourists, thank you for making the international tourism industry of the Philippines shine – like never before – cut above the rest.

To the event organizers, the promotions and marketing team, and to all the delegates and officials who poured valuable efforts to make ASTINDO come into fruition, congratulations for a job-well done. As the Philippines rise at the peak of its glory, may the spirit of camaraderie, nationalism, and patriotism continue to be the backbone of our shared success towards a more robust and sustainable Philippine economy.

ASTINDO Philippines Three-City Roadshow here in Indonesia is indeed a breakthrough, both for local and international tourism. But, as it favors the plight of Filipino natives, with the projected increase in business and employment activities, may our best interest always redound to showcasing, not just our terrains and waters, but also, the Filipino brand of service and hospitality.

With delight and gratitude, I am pleased to introduce myself before you, here at the third and final leg of ASTINDO in Bali, Indonesia. I am Atty. Gerville “Jinky Bitrics” R. Luistro, Vice Chairman of the House Committee on Tourism, and the Representative of the 2nd District of Batangas in the 19th Philippine Congress. Join me in saying: