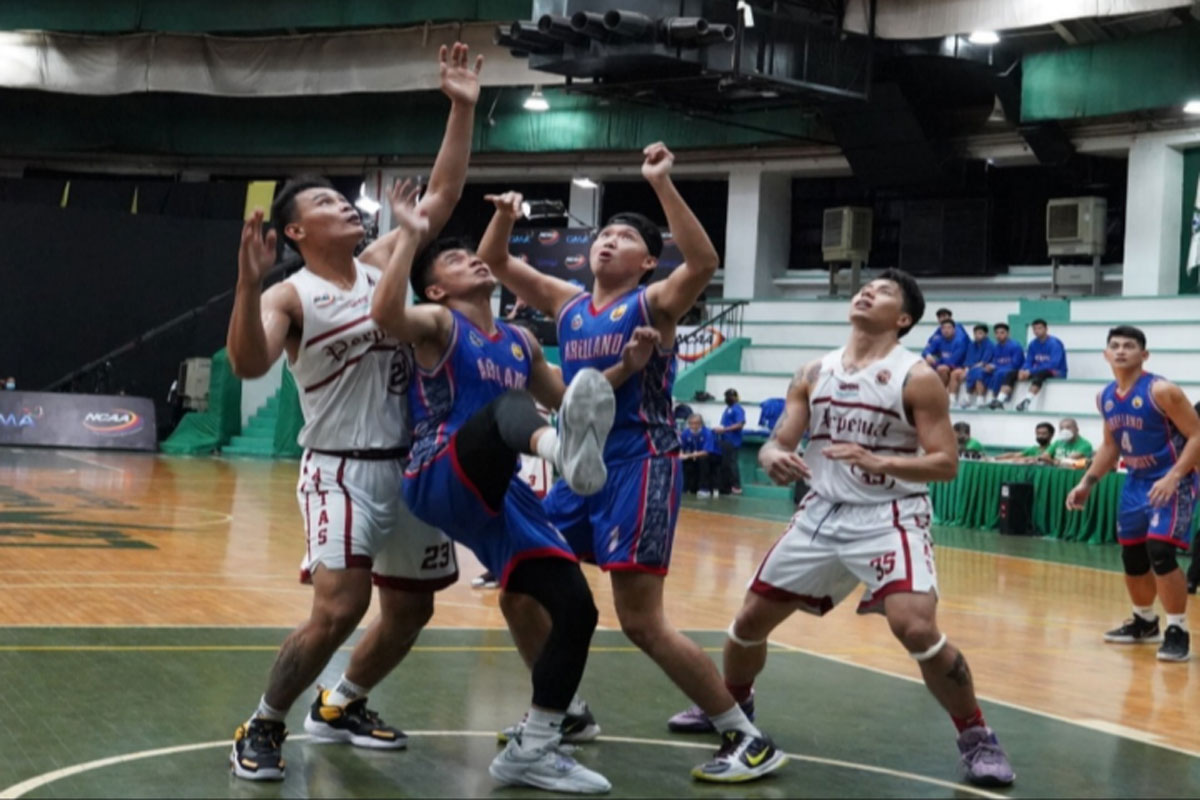 Perpetual Help and Arellao University battle for the rebound during their NCAA Season 97 game at the LSGH gym. Photo by Dennis Abrina
Basketball,

THREE teams put their unbeaten records on the line as the race for the two automatic Final Four slots heats up in the NCAA men’s basketball tournament today at the La Salle Greenhills Gym.

Defending champion Letran and Intramuros rival Mapua, both perfect in three games, eye to remain in the top two in the 12 noon clash.

Tournament format for this abbreviated season calls for the top two teams after the single-round eliminations will advance to the Final Four with an accompanying twice-to-beat advantage. Teams ranked third to sixth after the elims will go in the play-in tournament to determine the other two semifinalists.

The strong starts by the Knights, the Cardinals and the Red Lions bolstered their chances of finishing 1-2 after the short elimination round.

Aside from Warren Bonifacio, who will face the likes of Mark Sangalang and Jeo Ambohot, the Cardinals can also count on Paolo Hernandez down the stretch.

Although Hernandez had a combined 6-of-21 shooting in the past two games, his clutch treys against Jose Rizal University and San Sebastian keyed Mapua’s hard-earned wins.

Coach Bonnie Tan downplayed the Knights’ impressive start, saying they still have a lot to work on.

For coach Boyet Fernandez, a victory over the Stags will be a good springboard heading into their tough stretch of games.

“We’re happy we got these first three wins but we’re looking forward to the next games like San Sebastian, Letran, AU (Arellano University), Perpetual, and CSB, which are all considered stronger teams in the NCAA,” said Fernandez.

“Lahat naman strong and hirap na hirap nga kami manalo. Again, a lot of work for us so we have to be ready,” he added.

The Letran-San Beda rivalry game though, a rematch of the thrilling 2019 Finals which was originally scheduled on Tuesday will be moved on the final day of eliminations on April 29.

“The NCAA Management Committee met Wednesday night, and together with GMA, we decided to hold the games of San Beda against Letran on the last day of the elimination round. The reason behind is we recognize the rivalry, and also it’s been a tradition that the two schools – because of that rivalry – clash during the last day of elimination round,” said NCAA Mancom chairman Dax Castellano in a statement.

The Tuesday playdate now the lone game between JRU and College of Saint Benilde.

Sitting in sixth place with a 1-2 card, the Stags need to address their endgame execution if they wanted to pull a reversal of the Lions.