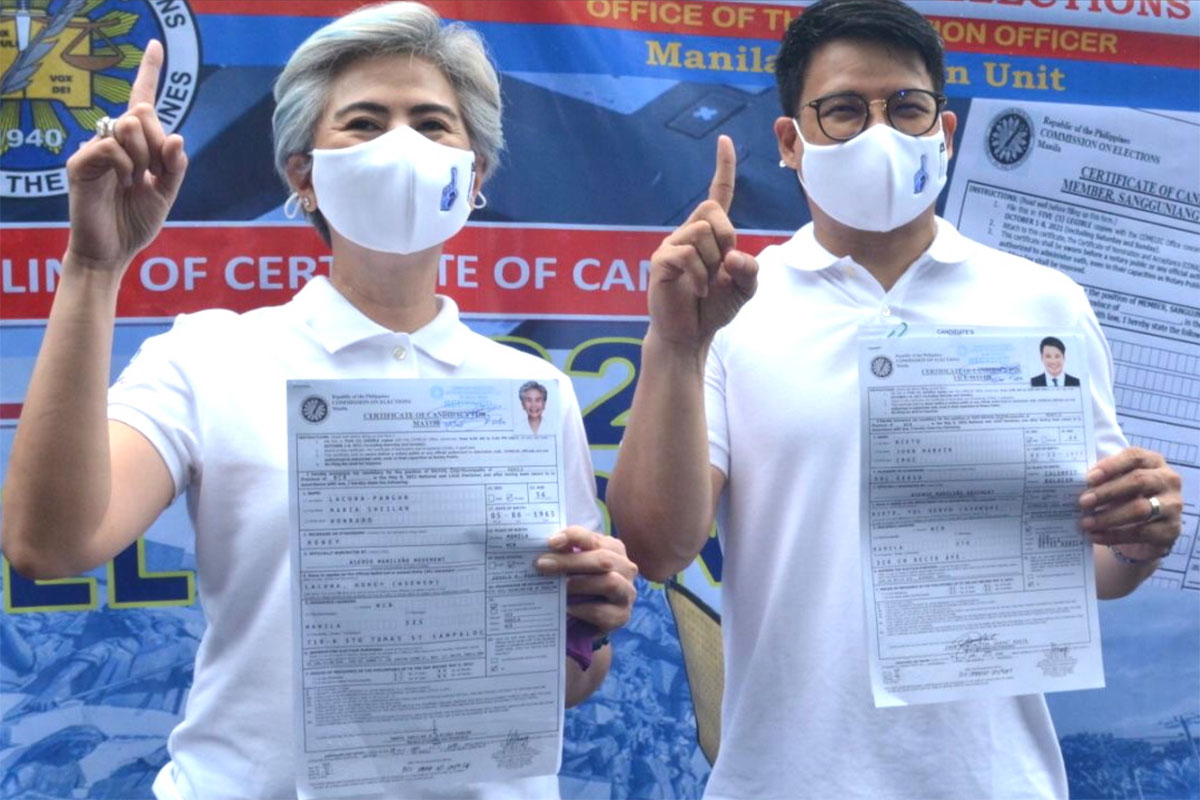 Manila Vice Mayor Honey Lacuna and Congressman Yul Servo after filing their certificates of candidacy at the Comelec office in Intramuros. Lacuna is running for mayor of Manila while Servo is running as her vice mayor come 2022 elections, under the Asenso Manileno party. Photo by JERRY S. TAN
Metro,

Thus declared Vice Mayor Honey Lacuna, as she and her Vice Mayoral candidate, third district Congressman Yul Servo, vowed to continue and even enhance all the programs that were introduced by Mayor Isko Moreno since he assumed office in 2019.

In announcing her candidacy, Lacuna thanked her working partner, Mayor Isko Moreno, for not turning her into a ‘spare tire’ and not allowing her being a woman to get in the way of their work, by involving her in every important project that the city government had undertaken, even tasking her to be on top of the city’s mass vaccination program and personally endorsing her to take over the mayorship as he runs for President in 2022 under the Aksyon Demokratiko party.

Guided by the principle of “Tuloy Serbisyo at Benepisyo,” Lacuna and Servo filed their CoCs at the Commission on Election (Comelec) office in Arroceros, Manila at around 10 a.m. after a press conference held in Intramuros where they introduced their line-up consisting of six Congressmen and 36 city councilors. Notably present in the event to express their full support were Lacuna’s mother Inday, a former banker, her husband Dr. Poks Pangan who heads the Manila Health Department and her siblings.

Both running under the Asenso Manileno party founded by Lacuna’s father, former Vice Mayor Danilo Lacuna, the tandem of Honey and Servo is the only one in Manila that has a complete slate. Servo said those whom they failed to accommodate due to limitations willingly agreed to be put on the waiting list, in case any candidate decides to back out for one reason or another.

Moreno said only the Lacuna-Servo tandem can continue all the projects he had begun in the city, citing that Lacuna had been with him since Day 1 of his term as city mayor, constantly supporting and working closely with him.

Lacuna vowed continuity especially when it comes to the city’s social amelioration program providing monthly allowances to the senior citizens, solo parents, students and persons with disability. Servo meanwhile said he is more than ready to take the role of the city’s vice mayor, saying he will use his experience as a former city councilor and now, Congressman for the past six years, to help craft laws that will benefit Manilans even more. Servo is on his second term in Congress where he also serves as the House Deputy Majority Floor Leader.

Lacuna entered public service as a doctor in 1994. She then served as fourth district councilor in Manila for three terms, from 2004 to 2013 and became the first lady majority floorleader in the Manila City Council. In 2016, she got elected as the city’s first lady vice mayor and won another term in 2019 and once elected, will become the first lady mayor of the capital city.