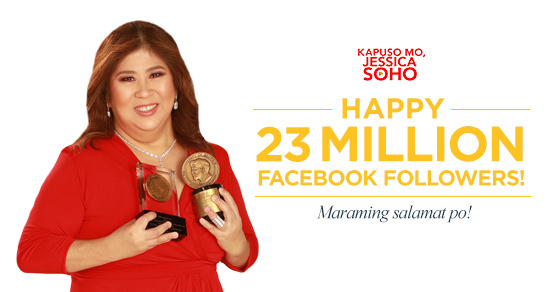 KMJS now the most followed Philippine TV show on Facebook

WITH over 23 million followers, “Kapuso Mo, Jessica Soho (KMJS)” marks another milestone as it becomes the most followed Philippine TV program on Facebook.

Data as of May 13 showed KMJS’ official Facebook page leading “Eat Bulaga” and “Wowowin” which have 18.9 million and 14.7 million followers, respectively.

This feat comes just over a month after KMJS surpassed its 22 million followers mark on the popular social media platform.

Hosted by GMA News pillar Jessica Soho, the award-winning magazine TV show has been raking in impressive engagement with its posts: tallying over three million organic interactions including likes, comments, and shares per week.

The show also took the top spot on Facebook Philippines’ trending topics on Local News Entertainment for March according to communications consultancy and management firm BluePrint.PH.

On air, KMJS continues to be one of the most watched programs nationwide and is considered the Filipinos’ Sunday viewing habit. Every week, it features stories that both inform and inspire viewers, especially during these trying times.

Soho said that this feat would not have been possible without the support of the viewers.

“23 million followers is just wow! Thank you to each and everyone who follows us and who takes the time to engage with us. You give us valuable feedback and insights that help us to further improve our content. This is an honor we share with all of you. Nakarating po tayo rito dahil sa inyo,” she said.

KMJS is the longest running news magazine program in the country.