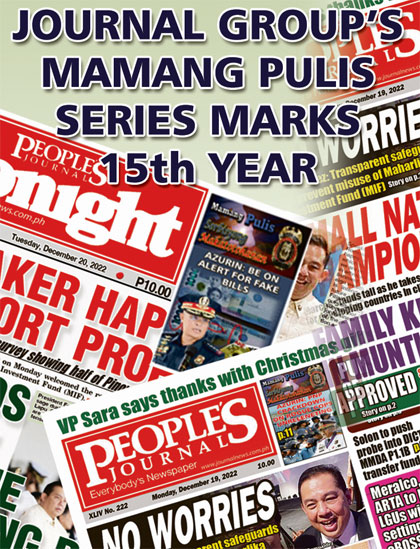 FIFTEEN and really going strong despite the many challenges brought up by the pandemic.

The Journal Group’s highly successful Mamang Pulis series marks its 15th anniversary today, Dec. 22, 2022, with the Philippine National Police (PNP) leadership headed by General Rodolfo S. Azurin once again citing its invaluable role in the more than 226,000-strong -strong organization’s massive and continuing reform program and campaign against illegal drugs, corruption and terrorism despite the tremendous odds and challenges they are facing amid the new normal.

The PNP leadership has cited the PJI’s Monday to Friday series as a vital cog in its public awareness program particularly when it comes to attracting the public trust and support thru its reform program which is now being felt by the public despite continuing criticisms against the organization.

In particular, it has been described as an important tool in promoting Gen. Azurin’s MKK=K program which stands for Malasakit, Kaayusan, Kapayapaan and Kaunlaran. The PNP chief has also called on his men to fully partner with the Church and the community and help fully address peace and order concerns thru his Kasimbayanan program.

President Ferdinand ‘Bongbong’ R. Marcos Jr. has commended Gen. Azurin, his 1st top cop and the 28th PNP chief in the country’s history for reintroducing to the force his peace and security framework entitled “MKK=K which he launched during his incumbency as regional director of the Police Regional Office 1 (PRO1) in Ilocos-Pangasinan region which include the President’s home province of Ilocos Norte.

The ’Malasakit’ program aspires to address the external and internal issues of the PNP including the drive against rouges in uniform.

The “Kaayusan Program”aspires to strictly implement the rule of law, without fear or favor, he said while the “Kapayapaan Program” aspires for lasting peace. Lastly, Gen. Azurin said the “Kaunlaran program” “is the ultimate goal of his peace and security framework as it presumes that if our government is perceived to be safe and peaceful, then tourists and investors shall come to our beautiful country, thereby increasing job opportunities for every Filipino.”

Over the years, the soon-to-be Police Brigadier General said this regular section in the People’s Journal and People’s Tonight has consistently promoted the popular advocacies of the organization and daily bring timely, factual and credible news to bring the Philippine brand of law enforcement and police service to a higher level.

Since its debut in 2007, the ‘Mamang Pulis’ corner has ably personified the PNP’s dream of becoming a really highly professional and capable police force truly worthy of the trust and respect of the people, he said.

Today, as the PNP moves on to yet another decade of shining service to the country and the Filipino people, the PNP leadership is confident that ‘Mamang Pulis’ will continue to be the rallying symbol of their mission to serve and protect the people.

The PNP this year has again succeeded in keeping criminality at a record low while enforcing PBBM’s new approach on fighting drugs and criminality with premium put on the preservation of life and full observation of human rights amid its untiring effort to help prevent the further spread of the killer COVID-19 virus in the country.

With its vow to remain steadfast and dedicated to their job to ‘serve and protect’ the public 24/7, the police had also ensured that the preservation of human rights will be their primordial interest as they go after criminals in the streets.

The ‘Mamang Pulis’ corner has been an invaluable partner of the PNP in the campaign against all forms of criminality specifically illegal drug trafficking and abuse and corruption apart from being an advocate of its massive transformation program under its P.A.T.R.O.L. Plan 2030 aimed at transforming the PNP into a more credible, effective and efficient police organization.

PNP chiefs and spokespersons have expressed the PNP’s deep gratitude and appreciation to the Journal Group of Publications for being a bulwark of responsible journalism and accurate reporting in the country.

The PNP leadership also lauded the Journal Group for being a solid partner of the Duterte government and the PNP when it comes to promoting genuine change.

Officials stressed that the Journal Group of Publications continues to serve as a catalyst of the PBBM government’s genuine effort to fight criminality, corruption, illegal drugs and terrorism while truly manifesting transparency and credibility that journalists and all of us should always be.

Over the years, this regular section in the People’s Journal and People’s Tonight has consistently promoted the popular advocacy of the PNP P.A.T.R.O.L Plan 2030 to bring the Philippine brand of law enforcement and police service to the finest.

True to its objective since its founding in 2007, the exceptional support of “Mamang Pulis” to the organization has paved the way in disseminating valuable and truthful information that is essential in enhancing the public perception about capable and trustworthy policemen.

The Journal Group’s Mamang Pulis series was born shortly after General Avelino I. Razon Jr. of Philippine Military Academy Class 1974 was named PNP chief in October 2007. As the new Chief, PNP, one of Razon’s main concerns then was how to make the people realize that-contrary to their belief-the cops are ready to serve and protect them.

As the late journalism icon and sportswriters’ deacon and former Journal Group editor-in-chief Augusto B. Villanueva used to say, Razon became the Chief, PNP at a time when the ordinary Filipino feared the cop rather than adored him, when the man on the street considered it safer distancing himself from the cop rather than running to him when in trouble. That negative perception of the police has been greatly changed as a result of the organization’s continuing transformation program.