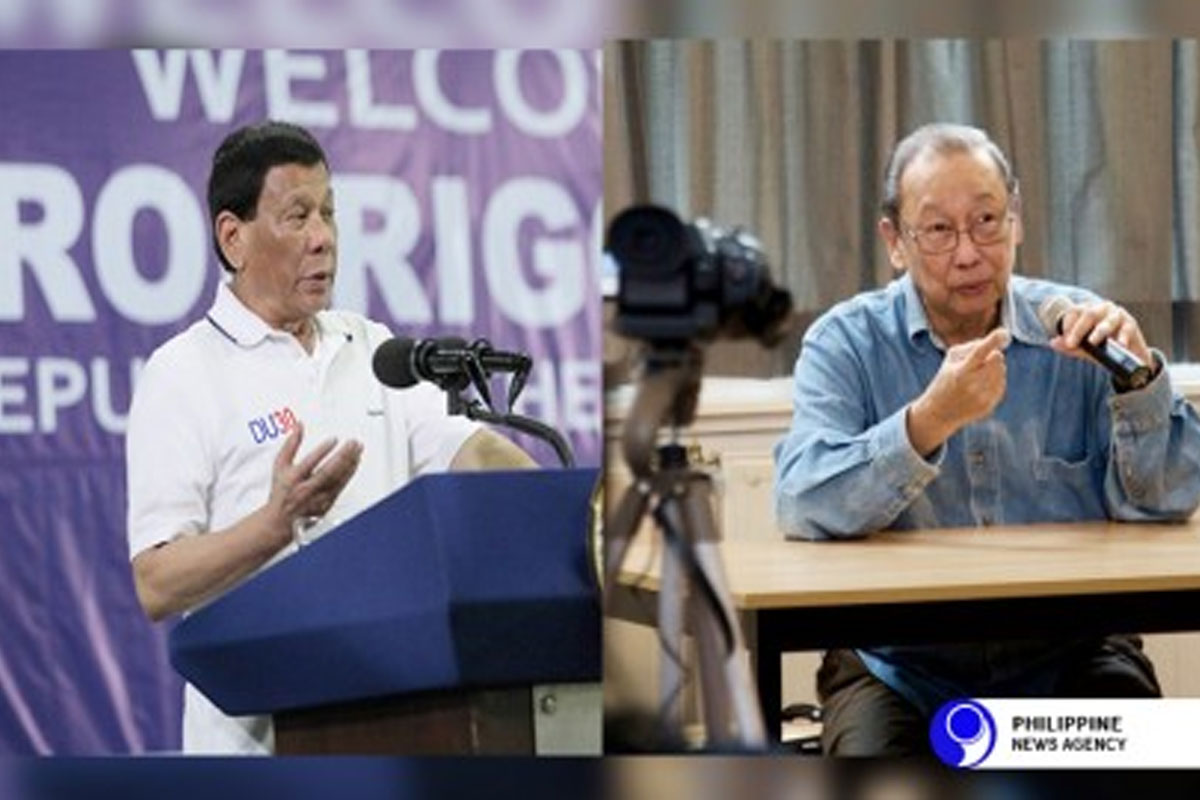 END OF ERA. Former President Rodrigo Duterte (left) says in a Facebook post Monday (Dec. 19, 2022) that the passing of Jose Maria ‘Joma’ Sison, the founder of the Communist Party of the Philippines (CPP, marks the end of an era of communist insurgency. Duterte notes that Sison is known for his radical ideas that affected the course of the country’s history and birthed the communist New People’s Army. (PNA file photo)
Nation,

DAVAO CITY – Former President Rodrigo Duterte said the passing of Jose Maria “Joma” Sison, the founder of the Communist Party of the Philippines (CPP), marks the end of an era of communist insurgency.

“His death certainly marks the end of an era, and it is my hope that with it, the end of insurgencies in the Philippines and the revolutionary movement that he has founded as well,” Duterte said in a Facebook post on Monday.

On Dec. 17, the CPP announced that Sison, 83, died after a two-week confinement in a hospital in the Netherlands.

Duterte said Sison is known for his radical ideas that affected the course of the country’s history and birthed a movement New People’s Army (NPA), that carries on up to this day.

“While Mr. Sison and I have had many disagreements – especially in the ways in which he chose to pursue and effect change in the country – I would like to believe that, at the end of the day, we shared the same dream of creating a better future for every Filipino,” he said.

The former president also urged the Filipinos to carry on the work of building a more harmonious and united country for the present and future generations.

“My sincerest condolences to his family and I pray that the Lord Almighty grants him and our country peace,” Duterte said.

Meanwhile, Arian Jane Ramos, the former secretary of the NPA Guerrilla Front 55 under the group’s Southern Mindanao Regional Command, said the death of “Ka Joma” does not mark the end of the communist insurgency, but showed that the People’s Democratic Revolution’s (PDR) purported victory in the Philippines was “a total hoax.”

“It has been more than five decades since the launch of the PDR, but there is no light to enjoy the people’s glory. Joma just died, but even he did not see it anymore as it was all promises, dreams that turned into lies,” Ramos said.

She said Joma’s death should “serve as a lesson for everyone,” especially for the people who continue to support or operate under the NPA movement.

Ramos believes the death of the CPP founder will further motivate the Armed Forces of the Philippines and the government to take immediate action to answer the main causes of communist insurgency. Philippine News Agency