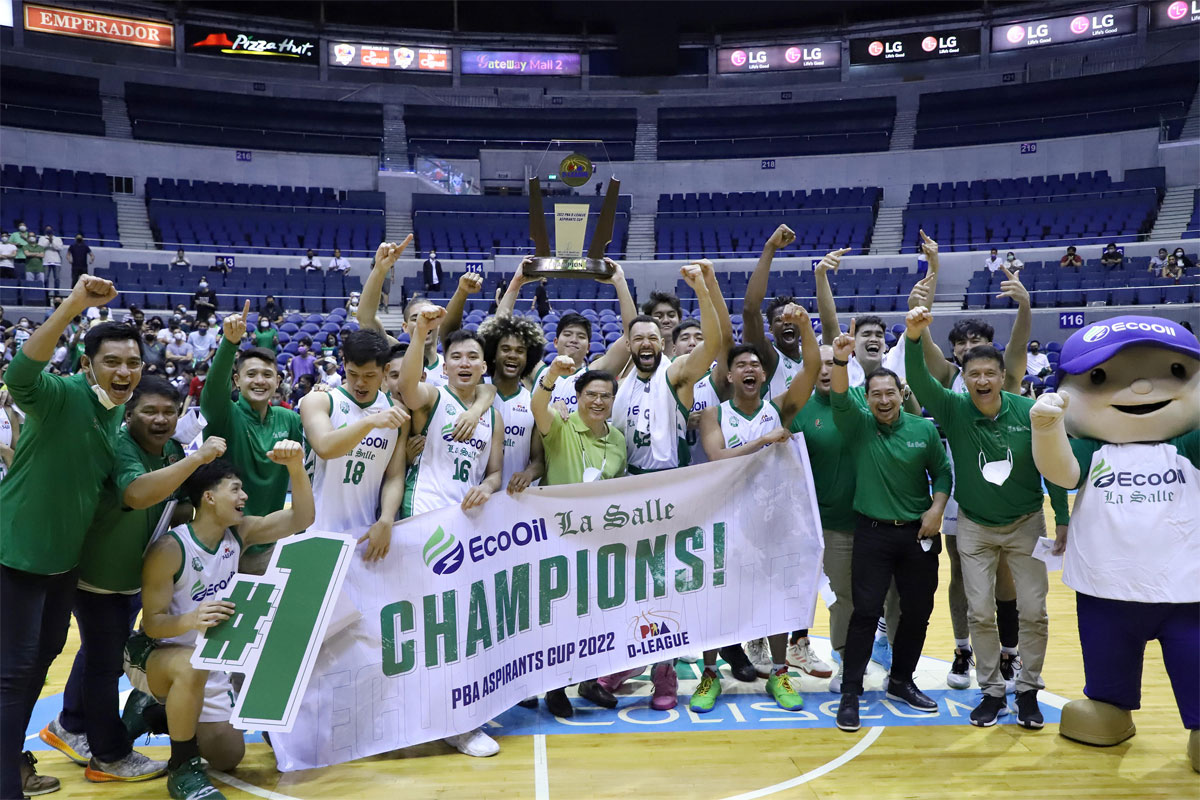 A WELL-RESTED EcoOil-La Salle hammered out a wire-to-wire 91-78 win over Marinerong Pilipino to rule the PBA D-League Aspirants’ Cup at the Smart Araneta Coliseum.

Coming off a week-long break after a 70-63 Game 2 win, the Green Archers looked refreshed in capturing the best-of-three series, 2-1, that will bode well heading into the new UAAP season in October.

“Definitely,” said a jubilant EcoOil-La Salle coach Derrick Pumaren, who gave his troops a two-day break after his team got booted out of contention in another off-season league. “It’s more of trying to recover and I think it paid off. I wanted them to stay sharp and I think we did it.”

The Green Archers opened a 49-34 lead in the first half and led by as much as points, 74-53, before fending off a late Skippers challenge in the final period.

A two-time UAAP champion for La Salle, it was also Pumaren’s first major title since winning two in a row with defunct PBA club Sunkist in 1995.

It was also some sort of redemption for Pumaren, who made it to the D-League Finals in improbable fashion in 2019, when his seven-man Centro Escolar University lost to powerhouse Cignal-Ateneo in four games.

“I’m happy that we won,” said Pumaren. “I fell short when I was in CEU when I was playing Ateneo, the mighty Ateneo, playing with only seven guys.”

“I’m really proud with the way the guys played today and they played their hearts out. They really played their A-game. The best game so far so far for La Salle,” he added.

Schonny Winston was scintillating for the Green Archers with 16 points, five rebounds, five assists and three steals while Mike Phillips produced his second consecutive double-double with 15 points and 16 rebounds to go with three assists.

Marinerong Pilipino’s downfall was hastened by the ejection of its star Jollo Go at the 8:53 mark of the third after punching EcoOil-La Salle’s Ben Phillips on the groin. Go, who had 21 points in the Game 2 loss, finished with two points and three turnovers in 12 minutes of action.

MVP Juan Gomez de Liaño had 30 points, six boards and three assists but had nine turnovers for Skippers, who settled for the runner-up honors for the second straight conference.

Mapua standouts Rence Nocum and Arvin Gamboa were the other Marinerong Pilipino double-digit scorers with 18 and 12 points, respectively.

Wiliams shines as Tropang Giga close in on PBA title