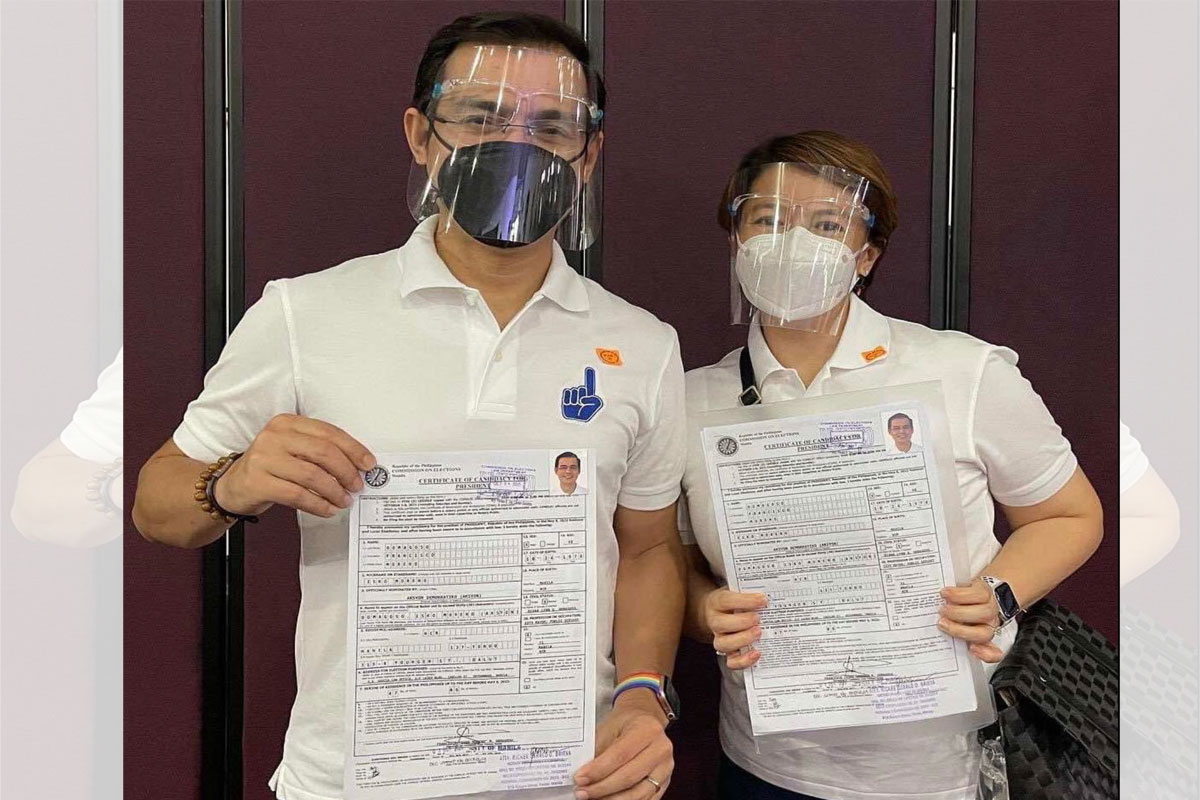 Mayor Isko Moreno and wife Dynee hold copies of his CoC after filing it at the Comelec. Photo by JERRY S. TAN
Metro,

TODAY, we made history. I hope it’s destiny.”

Thus said Manila Mayor Isko Moreno as he and runningmate Doc Willie Ong filed their certificates of candidacy for President and Vice President, respectively at the Commission on Elections (Comelec) yesterday before noon. Both are running under the Aksyon Demokratiko party.

Before going to the Comelec, Moreno, his wife Dynee and Ong, with wife Dr. Liza, paid a visit at the Sto. Nino de Tondo Parish Church in Tondo, along with Vice Mayor Honey Lacuna.

In his press conference following their filing of CoCS, Moreno thanked God and his parents Joaquin and Chayong –natives of Antique and Samar who squatted in the slums of Manila and whom he said did strive hard for him — teachers, classmates, fellow Tondo residents, Manilans for their contribution in making him reach the pinnacle of his local public service career when he got elected as Manila Mayor in 2019.

He made special mention of former Manila Vice Mayor Danny Lacuna, father of Vice Mayor Honey, whom he said is his mentor and who encouraged him to further improve himself as a public servant by going back to studies.

The mayor also took the opportunity to call on the voting public to choose him and Ong together and not to give him another Vice President.

He also explained that he opted for a doctor as his runningmate so that he can dedicate his time and effort focusing on economic challenges while Doc Willie can take care of the problems related to the pandemic which he said will still be around next year.

Moreno expressed hope that the Filipinos will also make another first next year, by choosing a President and a Vice President who are party allies and who do not belong to opposite sides.

The mayor cited as an example how his harmonious relationship with Vice Mayor Honey Lacuna, also a doctor, made the local government of Manila succeed in all its programs addressing pandemic-related problems.

Lacuna is running for mayor with third district Congressman Yul Servo as her vice-mayoral candidate.

Moreno assured that Lacuna and Servo will continue all the programs already started by his administration, speciall the social amelioration program for senior citizens, solo parents, persons with disabilities and students.