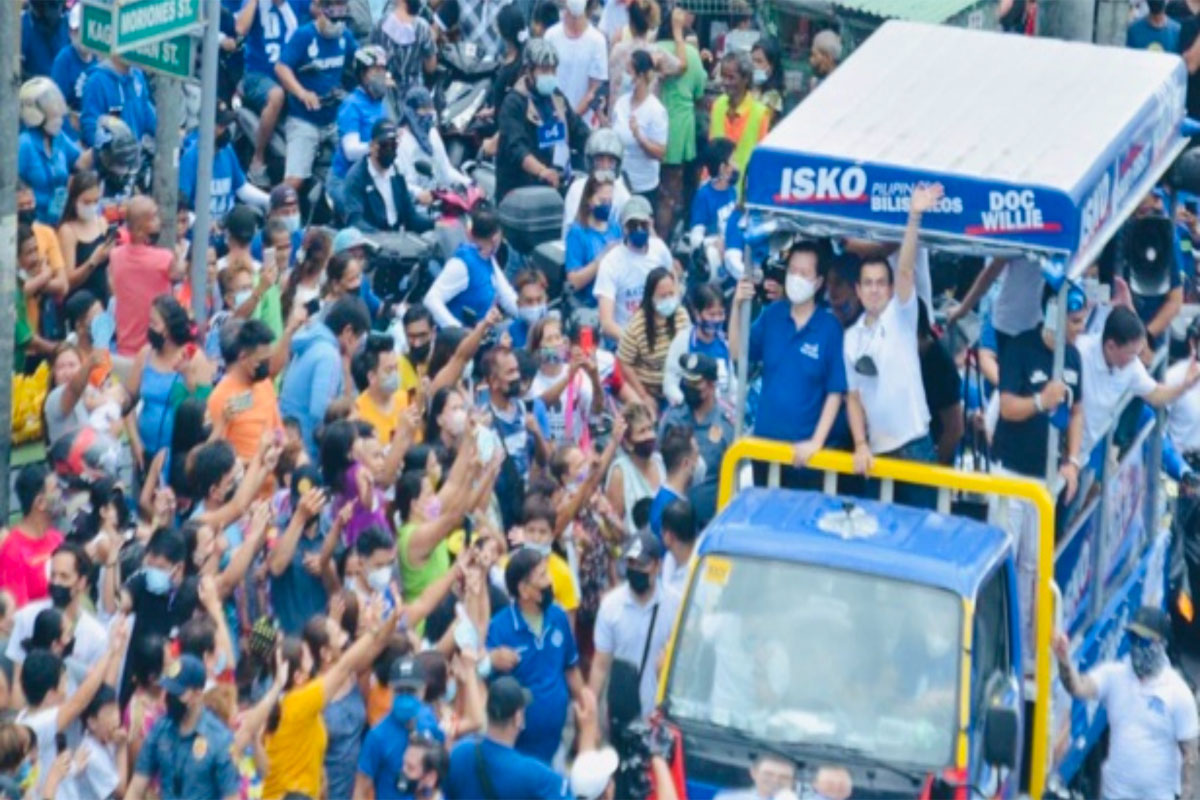 Aksyon Demnokratiko standard bearer Isko Moreno kicks off his campaign with a mass and a motorcade that went around the city of Manila, joined by runningmate Doc Willie Ong and senatoriables Samira Gutoc, Dr. Carl Balita, and Atty. Jopet Sison. Photo by Jerry S. Tan
Metro,

Isko is ‘David’ vs political ‘Goliaths’

IN his quest for the presidency, Manila Mayor Isko Moreno Domagoso likens himself to one of the most popular Biblical characters – David, who despite his youth was able to kill with a slingshot the giant-sized and seasoned warrior Goliath.

According to Moreno, just like David, he believes that after everything has been said and done, he too can beat the “Goliaths of Philippine politics” and become the next president of the country.

The 47-year-old presidential bet of Aksyon Demokratiko believes that for as long as one will do his or her best to achieve their goals in life and work hard for them, everything is attainable.

The Aksyon Demokratiko national candidates led by Moreno kicked off their campaign with a Holy Mass at the Sto. Niño Parish Church in Tondo followed by a “Blue Wave” caravan around the City of Manila.

About 5,000 motorcycle riders wearing blue t-shirts joined the caravan that saw Moreno and his Aksyon Demokratiko slate touring the streets of Tondo on top of a medium-sized truck with a makeshift roof.

Later in the afternoon, a modest and simple proclamation rally will formally start the 90-day campaign period for the 47-year-old Manila mayor’s quest for the presidency along with his running mate Dr. Willie Ong and the three Aksyon Demokratiko senatorial candidates Dr. Carl Balita, Samira Gutoc, and Jopet Sison.

The Aksyon party’s proclamation rally will be held at the Kartilya ng Katipunan beside the Manila City Hall. Attendance of guests as well as media men covering the event will be strictly limited in observance of health protocols. Guests will also be issued tickets to ensure social distancing.

“Yung aming proclamation rally would you believe by invitation lang because we really want to control ‘yung minimum health standards so we follow our own rules, sort of saying. But it will not be a perfect campaign but pumanatag kayong lahat kami pipilitin naming sumunod, ‘yun ang kompromiso ko sa taong bayan,” Moreno said on Monday.

If elected president, Moreno said he will address the perennial problems of poverty, hunger, unemployment, inequality, and social injustice in the country by focusing on providing the minimum basic needs of the people – housing, education, health care, and jobs – through the efficient and prudent management of government resources. With Itchie G. Cabayan