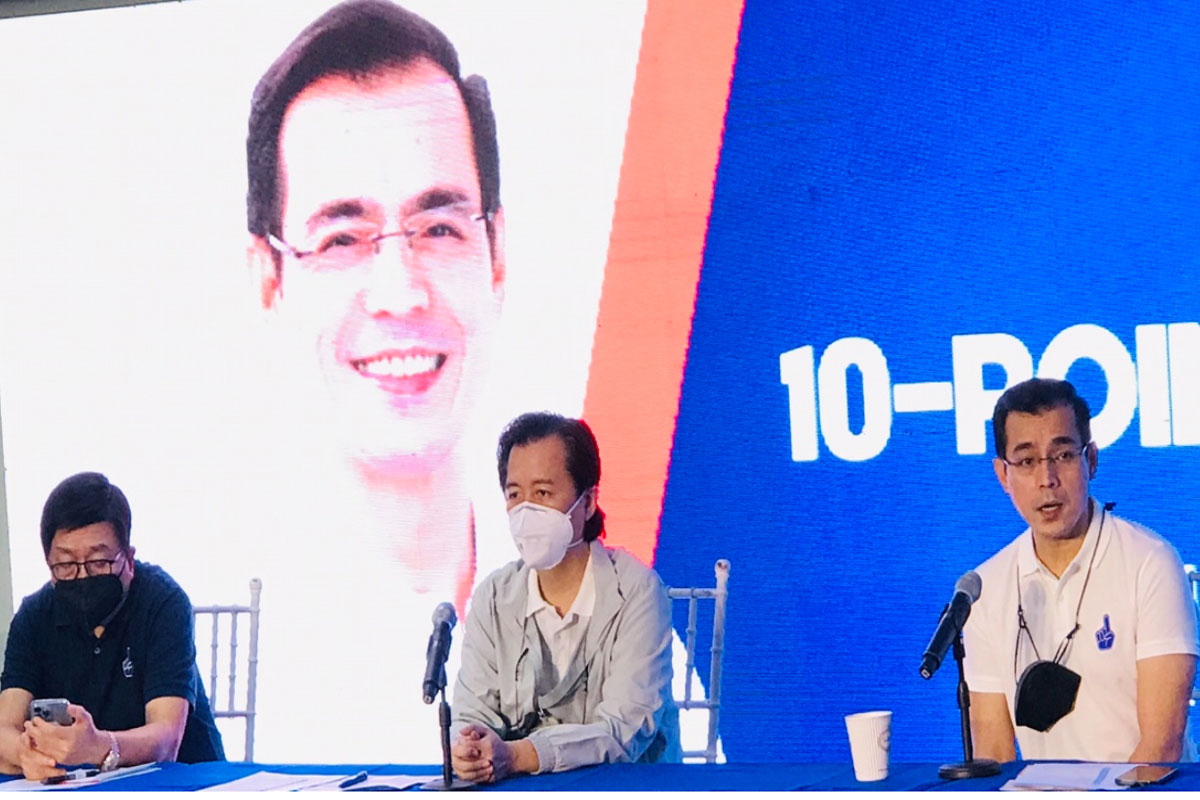 Manila Mayor and presidential aspirant Isko Moreno answers queries from the media during the presentation of his ten-point agenda. Beside him are his running mate Doc Willie Ong and campaign manager Lito Banayo. Photo by Jerry S. Tan
Metro,

AKSYON Demokratiko presidential candidate and Manila Mayor Isko Moreno Domagoso on Monday presented the 10 pillars of his “Bilis Kilos Economic Agenda” that will be his administration’s guiding principles to accelerate human and economic growth if elected president.

Under an Isko Moreno presidency, the national government will allot 1.3 percent of the gross domestic product (GDP) to housing per year to build one million disaster-resilient housing units in six years for the country’s estimated 4.5 million homeless persons, 3 million of which are in Metro Manila.

This includes building vertical housing projects within cities and near workplaces – just like Manila’s Tondominium, Binondominium, and Basecommunity – and prioritizing the passage of the National Land Use Act to fast-track settlements development.

In education, the thrust of the Bilis Kilos agenda is to ensure that the Filipino youth are competent, capable, and ready for the digital transformation of manufacturing, production, and related industries and value creation processes, also known as Industry 4.0.

To do this, Moreno said he will increase the budget-to-GDP ratio of education from the present 3.17 percent to 4.3 percent, widen access to quality education, and revise the curricula in all academic levels with a focus on science, technology, engineering, and mathematics (STEM) program.

Since vulnerable sectors will be the most affected by automation, with 50 percent of the workforce having automatable tasks, the government will also upgrade technical and vocational programs to train Filipino workers for the jobs of the future. Training courses for public school teachers will be a continuing process.

Under Moreno’s economic agenda, the government will be a major driver in the creation of better jobs and opportunities by providing various interventions and support to micro, small and medium enterprises (MSMEs) which comprises the majority of businesses in the country and employs around 63 percent of the total workforce.

Moreno said these include increasing credit availability for MSMEs from the present P1.5 billion to P30 billion and further easing the cost of doing business by simplifying processes. Training activities, workshops, and retooling programs will also be made available by the government to overseas Filipino workers (OFWs) to help them find better jobs and opportunities. Pandemic-affected Filipino families will continue to receive “ayuda” (cash assistance) from the government.

To improve the country’s health care system, Moreno said his administration will build more public hospitals and health care centers throughout the country, with a target of providing 107,000 additional hospital beds in his first 1,000 days in office.

He also plans to achieve a ratio of one doctor per 1,000 Filipinos equitably distributed across the country by providing scholarships to 10,000 medical students per year. He also promised to increase the salary of nurses and other healthcare workers.

But foremost will be the rollout of a clear pandemic response roadmap that aims to fully protect all Filipinos against COVID-19 by December 31 of 2022 to open up the economy, and make the country prepared for future pandemics.

As one of the major drivers of the economy, Moreno’s administration will promote a culture of sustainable tourism by building tourism highways and developing tourism circuits throughout the country, along with increased investments in public infrastructure to strengthen the physical, economic and digital connectivity among growth centers and rural economies.

Moreno also plans to boost the country’s digital infrastructure by building and completing a national fiber backbone that will connect all schools, government offices, and industries that rely heavily on internet connectivity.

Moreno however emphasized that his infrastructure agenda will prioritize equitable growth, thus infusing more infrastructure development in areas or provinces with low human development index (HDI), particularly in the Visayas and Mindanao, to bring about a more inclusive economic growth.

To further prepare for Industry 4.0, the Bilis Kilos agenda commits to increase the government budget for research and development (R&D), from the current 0.16 percent of GDP to the global standard of 2 percent of GDP.

With 92 percent of new business value expected to be driven by artificial intelligence (AI) in the next five years, R&D will prioritize AI and additive manufacturing where the return to the economy is highest, especially in the short term. The government’s R&D program will also be used to support the Philippine startup community, to create a “unicorn” – a billion-dollar startup company in the likes of Singapore-based Grab and Lazada.

In agriculture, Moreno aims to raise the income of farmers to the level of average Filipino workers by lowering the cost of agricultural production; providing risk-free capitals; building more irrigation systems while improving the efficiency of existing ones; and establishing the Department of Fisheries and Aquatic Resources, among others.

Likewise, the government will lead the effort for farmers to adopt new technologies to increase their productivity and help them establish linkages with reputable businessmen for their products.

To oversee this all is an open, transparent, inclusive, and streamlined bureaucracy helmed by the “best, brightest and most experienced patriotic Filipinos.”

And like what he did in Manila, Moreno’s Bilis Kilos agenda also calls for smart governance, which promotes citizen participation and rapid delivery of services through automation and digitalization of government processes; and promotes transparency by making public data accessible to all in a format that is user-friendly, digestible, open, free and downloadable.