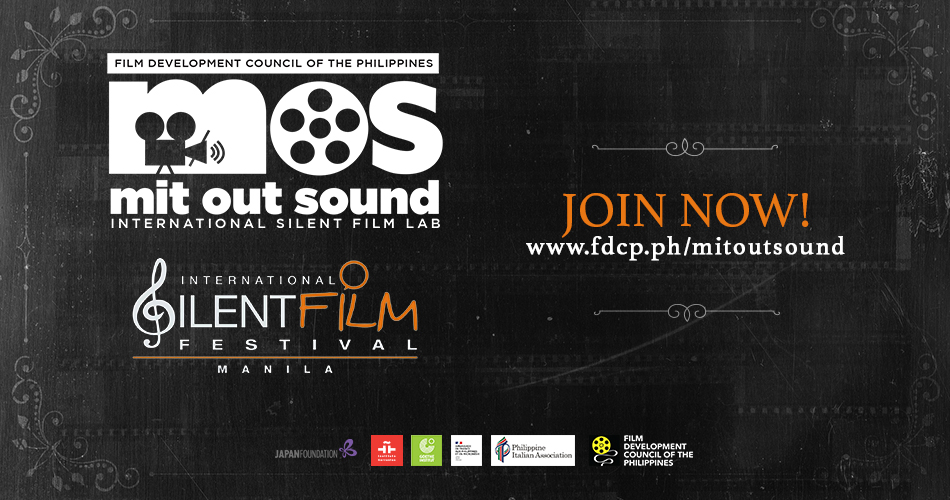 The ISFFM is a joint partnership among the Film Development Council of the Philippines (FDCP), Embassy of France in Manila, Philippine Italian Association, Goethe-Institute Philippinen, Instituto Cervantes de Manila, and Japan Foundation, Manila.

Established in 2007, the ISFFM is among the few remaining silent film festivals in the world and the first and oldest Southeast Asian silent film festival. It is an awaited cultural event among cinephiles and music lovers as it brings together film classics and Filipino musicians on the same stage to perform and reinterpret stories.

The ISFFM committee will choose 10 filmmakers to undergo the intensive MOS film lab. The FDCP, through its Film Cultural Exchange Program (FCEP), will conduct all MOS activities, including the Visual Storytelling Lab, Safe Filming Lab, and Editing Lab sessions that will be held via Zoom.

Participants will each be awarded a production grant worth P50,000 to produce their silent shorts that will premiere at the Silent Short Film Competition in the 15th ISFFM in November 2021.

“Philippine Cinema has lost most of its early silent films. This sad reality inspired the creation of the first Mit Out Sound: International Silent Film Lab in order to revive the interest in silent filmmaking and enhance the expertise of Filipino filmmakers in creating unique and quality films,” said FDCP Chairperson and CEO Liza Diño.

She noted that silent filmmaking is crucial in the history of Philippine Cinema because the first movie produced and directed by a Filipino, “Dalagang Bukid” by Jose Nepomuceno, was a silent film. The classic’s release date of September 12, 1919 was the basis of the declaration of Sine Sandaan or One Hundred Years of Philippine Cinema.

Since the production of silent films only appeals to a few filmmakers, the ISFFM has issued a nationwide call for entries by amateur and professional filmmakers aged 16 and above.

With the theme “Reimagining the Past with the Present,” the MOS: International Silent Film Lab seeks to celebrate film retrospective and pay homage to Philippine silent cinema.

Interested filmmakers should submit the following requirements in an organized Google Drive folder with a shared viewing setting to specialprojects@fdcp.ph until June 18, 2021:

● Presentation deck of the story treatment (Applicants may submit a maximum of two treatments.)

● Portfolio of past works

To download the application form and view the full mechanics, visit https://www.fdcp.ph/mitoutsound and for inquiries, contact Ms. Julienne Calugcug at jmcalugcug.fdcp@gmail.com or specialprojects@fdcp.ph.