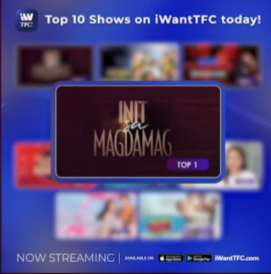 ABS-CBN’s primetime series “Init Sa Magdamag” continues to attract viewers across all demographics, landing as number one on the list of top ten shows on iWantTFC with its mix of controversial yet very relatable themes.

Last week, the show became the most viewed on WeTV iflix.

Produced by Star Creatives, “Init Sa Magdamag” is under the creative management of Henry Quitain and direction of Ian Lorenos and Raymond Ocampo.

Watch “Init sa Magdamag” nightly at 9:20 on TV5, A2Z, Kapamilya Channel, Jeepney TV and Kapamilya Online Live via the YouTube channel and Facebook page of ABS-CBN Entertainment. Outside the country, it is available on The Filipino Channel while its advance episodes can be accessed on iWantTFC and WeTV iflix.

The Squad Plus welcomes PBB Connect’s Kodrea and Hairon