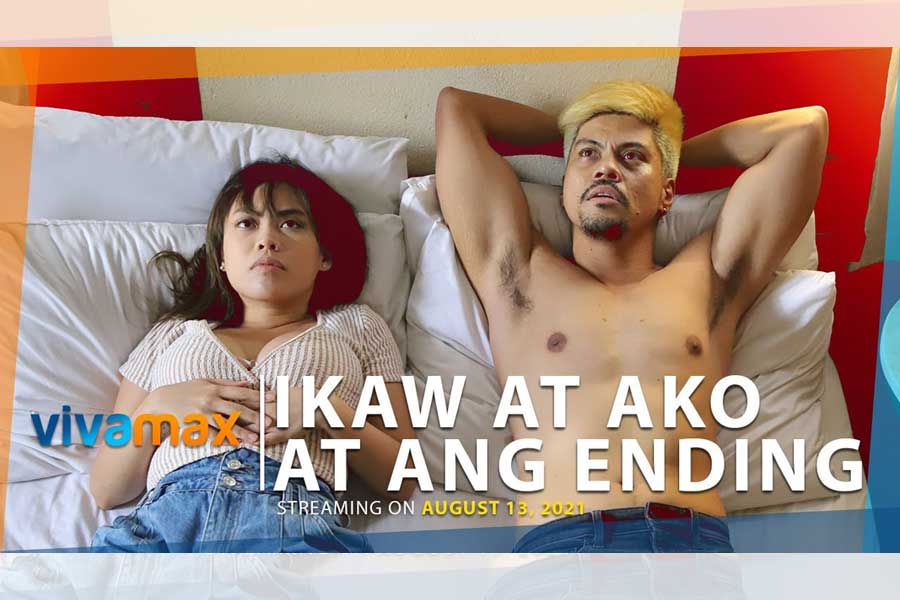 How Kim, Jerald make it light to do heavy scenes

THE KimJe love team of Jerald Napoles and Kim Molina are back in a new movie so different from their past two outings: “Jowable” and “Babaeng Walang Pakiramdam”. They now star in “Ako at Ikaw at ang Ending”, written and directed by Irene Villamor who did such hits as “Sid & Aya”, “Meet Me in St. Gallen” and “Camp Sawi”.

“Kaya nagpapasalamat kami talaga kay Direk Irene for giving us this chance na mapanood kami ng viewers sa ganitong naiibang palabas,” adds Jerald. “This is a big opportunity to show what we’re capable of doing as actors after being identified as comedians.”

Didn’t she find it difficult to convince them to do the hot bedscenes? “Hindi ako nahirapan kasi sila pa nga ‘yung nagsasabi sa’kin, ‘o ano pa ang gusto mong ipagawa sa amin?’. Masaya nga kasi ang dami nilang kayang gawin at ibigay sa direktor kaya ang gaan ng lahat. Kaibigan ko rin sila, kaya alam ko kung ano ang mga kakayahan nila sa pagiging artista. Puede mo silang i-push kung hanggang saan sila masasagad. Ang peg ko sa movie is ‘Thelma and Louise’ na you and me against the world ang characters. Their characters as Martin and Mylene are not the types you’d expect to play leads, but they surely deserve to have their own movie. They are two hopeless strangers who meet in an unexpected time where both are trying to escape from their miserable lives and they get involved in some surprising incidents that lead to a very suspenseful and exciting climax.”

The movie starts streaming globally on August 13 on ktx.ph, iWant TFC, TFC IPTV and on VIVAMAX. Subscribe using VIVAMAX app via Google Play Store and App Store. For only P29, you can unli-watch for three days, P149/month, and P399 for 3 months for bigger savings!

ALTHEA Ablan is one of GMA-7’s top teen stars. She stared as a 9-year old child star in such teleseryes as “Encantadia” and “Haplos”. She got her biggest break when she played one of the title role stars in the superhit afternoon series, “Prima Donnas”, with her playing Donna Belle or Ella.

Now 16, Althea is happy to be part of the new youth-oriented musical-variety-comedy show, “FLEX”, which she co-hosts with Gen Z co-stars Mavy Legaspi, JD Domagoso and Lexi Gonzales. This is seen every Sunday at 8:30 PM on GTV.

“I felt so happy when I was informed that I will be a part of this show as it reaches out to young people like me,” she says. “It was really designed for us. Kaming apat na hosts will be the FLEX leaders, with different Gen Z artists guesting each Sunday to do musical performances, gags, sketches, and talent competitions.”

“FLEX” is also very much fan-oriented. “The show will give a chance to the fans to be able to interact with their idols via an interactive game segment in which they have a chance to play with FLEX Leaders and celebrity guests,” adds Althea. “And what’s more, the fans can also become a Flexer by just joining the official fan club of the group, the FLEX Squad! All you have to do to become a member is to just send a message to our official Facebook page.”

Flex can mean you want to praise or give tribute to someone. In her case, who would she like to flex in her life?

“Ang ife-FLEX ko are my own parents kasi they’re very supportive of me and lagi silang nandiyan kapag kailangan ko sila. I’m very thankful na may parents ako na kagaya nila who have been loving me all my life and backing me up every step of the way. I also want to FLEX the Lord for all His continued blessings and also GMA Network for making me a part of ‘Prima Donnas’ and now, ‘FLEX’. I’m so grateful and happy na kahit nagkaroon ng pandemic, hindi ako nawawalan ng assignment. Tapos, hinahanda na ngayon ang pagbabalik ng ‘Prima Donnas’ sa aming Book 2 kaya abangan nyo yan.”

And how is it working with her three co-hosts Mavy, JD and Lexi? “I’m glad to have new friends. Ang babait nila at nadevelop agad ang magandang camaraderie among us four hosts. We enjoy each other’s company, no clashes or conflicts at all kasi naging parang isang pamilya kami agad.”

Don’t miss “FLEX” on Sundays, a show that brings out the exciting exuberance of young people that helps bring out their true and authentic selves and their energetic contemporary life style.