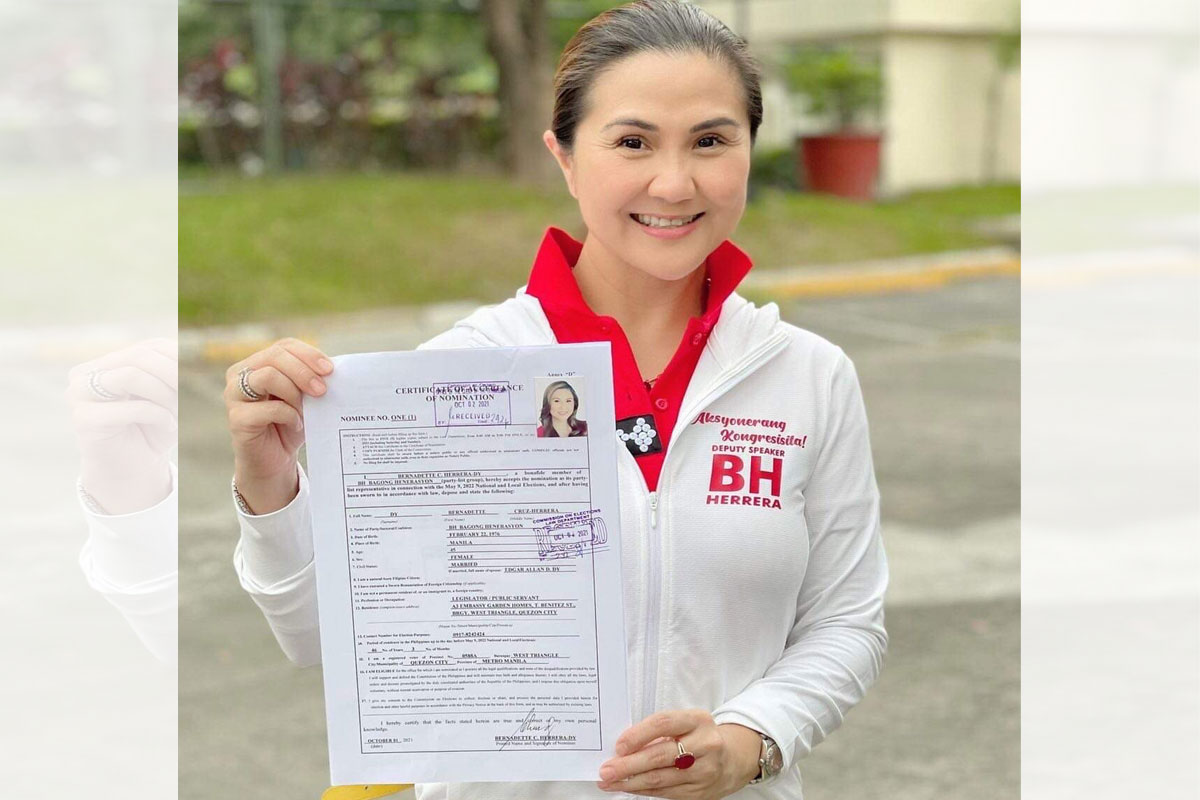 House Deputy Speaker Bernadette Herrera formalizes her reelection bid on Saturday, as her party-list group Bagong Henerasyon files with the Commission on Elections its Certificate of Nomination and Acceptance with her as first nominee. Herrera vows to continue championing women and youth empowerment, strengthening MSMEs, consumer protection, efficient internet, and economic recovery.
Nation,

DEPUTY Speaker Bernadette Herrera is seeking another term as representative of the Bagong Henerasyon party-list in Congress.

Herrera formalized her reelection bid on Saturday as her group filed with the Commission on Elections (Comelec) its Certificate of Nomination and Acceptance (CONA) with her as first nominee.

The House leader, who is currently serving her second consecutive term as partylist lawmaker, believes she still has much work left to do.

“We have done a lot, but there’s much more we can do for our kababayans, especially in this time of the pandemic,” Herrera said.

Herrera, who has earned the moniker “Aksyonera” for getting things done fast, said Bagong Henerasyon will remain “the voice of women and youth, as well as micro, small and medium enterprises (MSMEs) in Congress.”

Herrera believes that empowering women is essential to social and economic development of families.

In her many years in Congress, Herrera authored several laws that significantly affect women, one of which is the 105-Day Expanded Maternity Leave Act.

She also vigorously pushed for the bill banning child marriage in the country, which is presently awaiting signature by President Rodrigo Duterte.

To help the country navigate through the challenges of COVID-19, Herrera co-authored the Bayanihan laws that granted the President additional authority to combat COVID-19 and provided for pandemic response and recovery interventions.

She also fought for a stimulus package for MSMEs, which are among the hardest hit by COVID-19 due to the community quarantine restrictions.

The Deputy Speaker was also active in committee hearings and investigations imbued with public interest.

Herrera’s hard work and dedication did not go unnoticed by the public.

Just last month, Herrera emerged as the top performing party-list lawmaker in the National Capital Region (NCR) based on a survey conducted by RP-Mission and Development Foundation Inc. (RPMD).

According to RPMD, Herrera ranked first among the five best performing party-list representatives with her job approval rating of 71 percent.