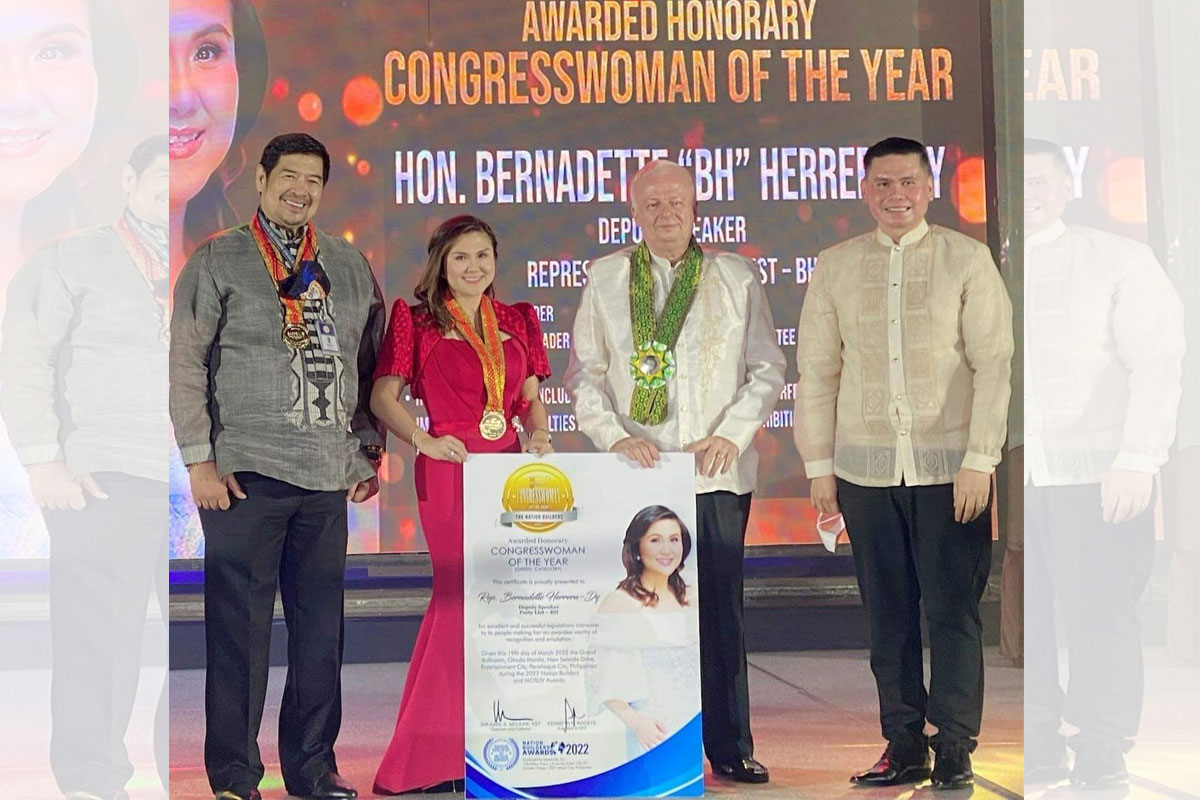 House Deputy Speaker and Bagong Henerasyon (BH) Rep. Bernadette Herrera (second from left) accepts the “Honorary Congresswoman of the Year” award from Sustainable Standards Inc. (SSI) during the Nation Builders and MOSLIV (Most Sustainable and Liveable) Awards 2022 held at the Grand Ballroom of Okada Manila in Parañaque City on March 19. Herrera was recognized for the “exceptionally meritorious conduct” in the performance of her service, consistent with the principles of sustainable development. Her group Bagong Henerasyon was also awarded the “Most Sustainable and Liveable Partylist.” Also in photo (from left) are guest of honor Interior and Local Government Undersecretary Martin Diño and SSI chair Karl McLean and president and CEO Kenneth Prieto Rocete.
Miscellaneous,

HOUSE Deputy Speaker Bernadette Herrera has been chosen as “Honorary Congresswoman of the Year” in this year’s Nation Builders and MOSLIV Awards organized by Sustainable Standards Inc. (SSI).

MOSLIV, which stands for Most Sustainable and Liveable, serves as a guide to achieving the United Nations Sustainable Development Goals towards a global climate-neutral society by 2050 and an inspiration for those in key positions or roles of influence to advocate for responsible and earth-friendly or green practices.

The awarding ceremony was held last Saturday, March 19, at the Grand Ballroom of Okada Manila in Parañaque City.

In her acceptance speech, Herrera said she’s proud and honored to be among this year’s awardees who have been recognized for their contributions to nation-building.

“I sincerely believe that if all of us here will continue to exert efforts to make our country great in our own little way, we can surely achieve a brighter, more prosperous, and a truly sustainable and liveable Philippines,” Herrera said.

“While I cherish and humbly accept this award, I honestly believe there is no better reward than seeing the smiles in the faces of the people whose lives we have helped improve,” she added while urging fellow awardees to continue to empower the lives of Filipinos.

Herrera thanked all those behind the MOSLIV Awards, especially SSI chair Karl McLean, who was also behind the international award-giving body Superbrands, and SSI president and CEO Kenneth Prieto Rocete.

“I am truly honored and equally humbled to receive the Honorary Congressman of the Year and Most Sustainable and Liveable Partylist for Bagong Henerasyon,” Herrera said.

“From my first day in the halls of Congress, I have made it a priority to use my position to champion various causes, including environment and climate change such as the ban on single-use plastics, and I look forward to continuing this important work,” she added.

Herrera is currently seeking another term as representative of the Bagong Henerasyon Partylist in Congress.

She formalized her reelection bid last October as her group filed with the Commission on Elections its Certificate of Nomination and Acceptance with her as first nominee for the upcoming May 9 polls.

The House leader, who is currently serving her second consecutive term as partylist lawmaker, believes she still has much work left to do.

“We have done a lot, but there’s much more we can do for our kababayans, especially in this time of the pandemic,” Herrera said.

In choosing Herrera as “Honorary Congresswoman of the Year,” the MOSLIV Awards cited her “exceptionally meritorious conduct in the performance of your service.”

It particularly recognized her efforts “to raise the profile of your Party List through action in collaboration championing sustainable projects in relation to human life, eradicate poverty and hunger, guaranteeing a healthy life, universalize access to basic services including development opportunities through inclusive education and decent work as well as principles that measure sustainable development goals.” 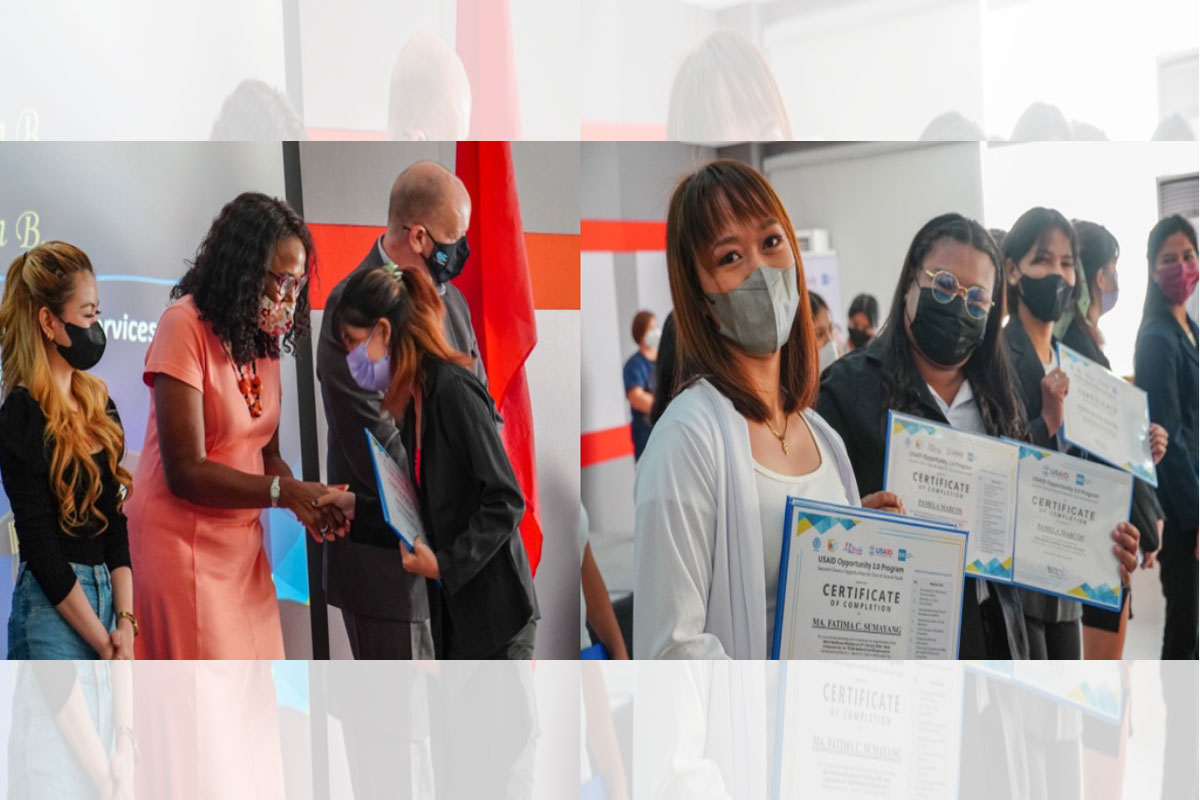 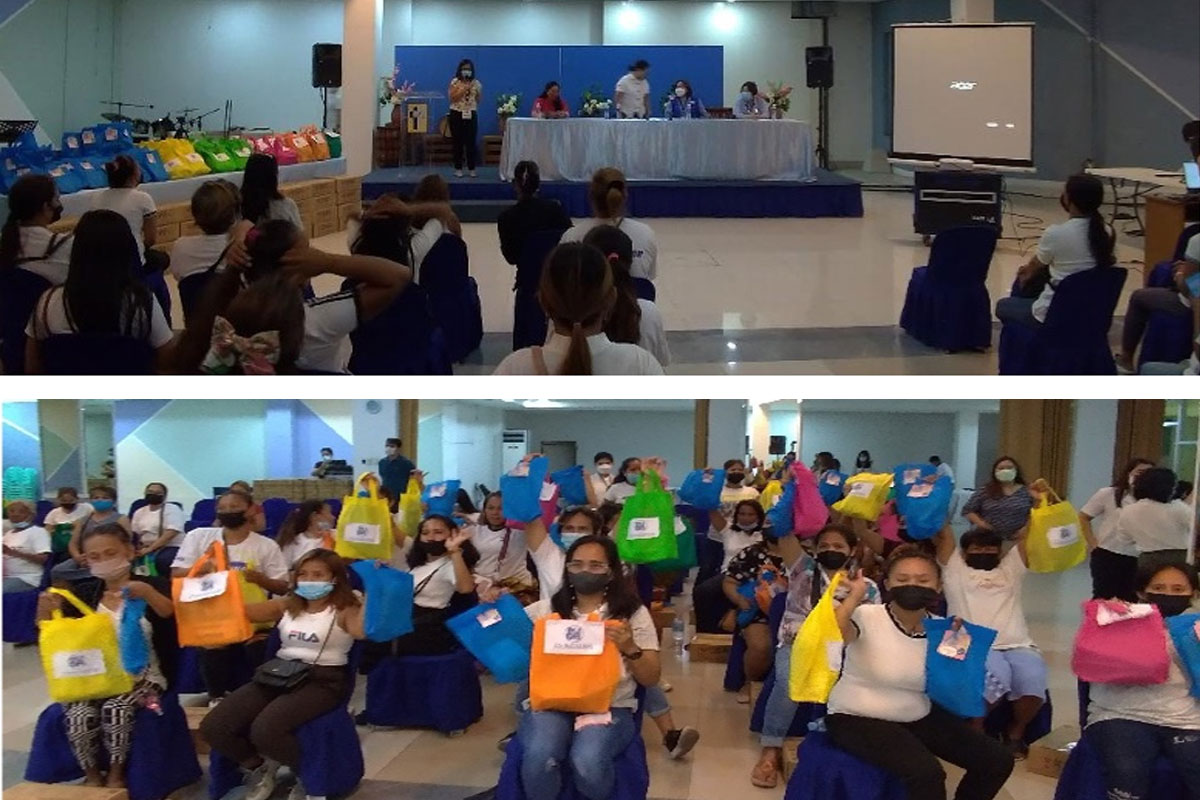