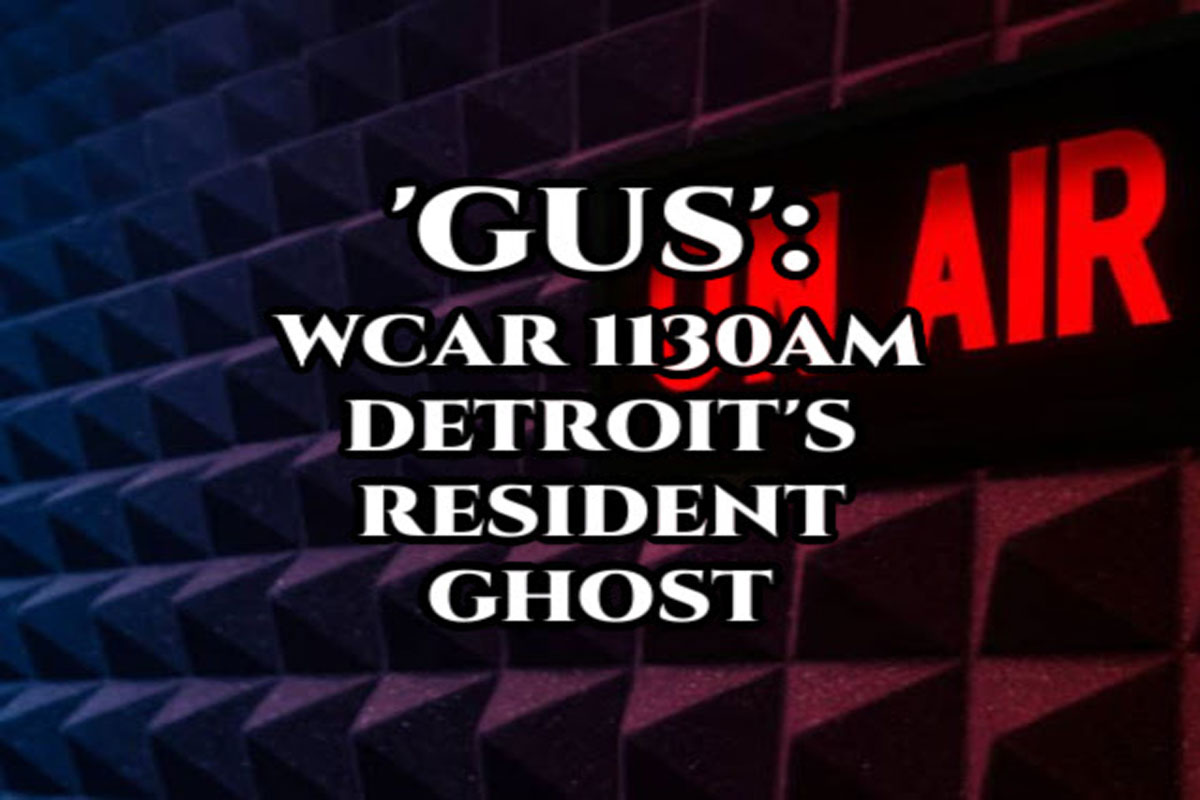 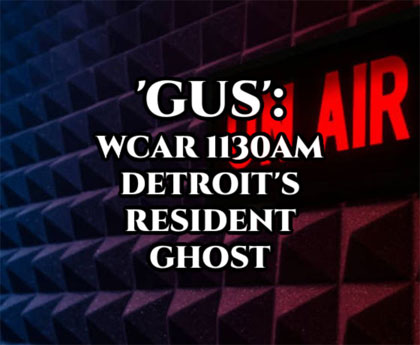 Every once in a while I like to post a decent ghost tale. This account is a Detroit legend. It concerns a ghost named ‘Gus,’ that roamed the WCAR radio building – a former funeral home.

“As a young fellow in radio, we all knew each other. Even if we were competitors, I would know the guy across town at the other radio station. And although the general managers and salespeople would think the staff at the other stations were “the enemy,” we all got along just fine. Of course we never gave up secrets, or mentioned what the station was planning on doing. Truth be told, we would enjoy the art of one-upmanship with each other. After work we would meet at various places; the news directors and talent at a high end bar, and the lowly DJs at some mediocre bar, and sometimes strip club.

Occasionally, when management would not be looking, we would go to the other station and sit in with a friend and shoot the bull as he would be doing his job. Sometimes offering a joke or in some cases calling from an adjacent room pretending to be a listener. If you ever heard Gary Burbank do his “Earl Pitts,” occasionally we would do something like that just for fun.

I think the best one I ever did was with my friend Rick at the country radio station. Rick was an ex-Vietnam vet who was very talented on the air, quick wit, dry sense of humor, often making a joke at the expense of a caller to the request line. We hit it off because we had met a few times at a gun range, and shared the hobbies of guns, shortwave radio, etc..

On my night off I would call up Rick on the request line, and he would put me on the air as “Ted the Truckee,” an over the road truck driver who was always getting lost on the road. Rick’s station was in Detroit, and Ted would call in from somewhere saying he’s lost and looking to get directions or telling a wild story about something. “Hey Rick, this is Ted! I’m sort of lost.” “Where are you at now?” “I’m in Frankenstein.” “Where?” “Frankenstein! I’m on my way to the Ford plant in Romeo, and I think I overshot and wound up here.” To cut to the chase…Frankenstein was actually Frankenmuth, Michigan. The gag would go on for a minute before the next song was played.

Anyway, I was with Rick in the studio one night at his station. The station was in sort of a nice-looking building near 6-Mile Road and the Southfield Freeway (M-39). The studio was about 20’ x 20’, sound proofed, and a huge picture window in the wall in front of the DJ looking out on the hallway. This was so when the big talent was working days, management could bring clients down the hall to watch the DJ work without going in the studio. At times it was a distraction since people would be coming up and down the hall in front of you as you would be working on the air.

Rick had the 11PM to 5AM shift, which was lonely since, typically, Rick would be the only one there. After 5PM the office left, after 7PM the news department left, and the guy who you took over for at 11PM would typically bolt out of the studio to go party or see a skirt.

I sat in back of Rick while he sat at his control board, and when a record was playing on the air we would talk, joke, and generally be rude to each other. At 12AM in the morning the place was empty, and the news department wouldn’t come in until 4AM to prepare for news at 5:30AM. We were the only ones there.

We were talking and he leaned to the right to cue up another record when I saw this older gentleman walk down the hall without looking in. He appeared to be in his 60s, white crew cut hair, somewhat stocky, with a tattoo on his right forearm. “Rick, it looks like the news department is in early”.

“I just saw someone walk down the hall.”

I explained what I saw and Rick, looking perturbed, sort of made a face of disgust and went back to sorting records.

Rick spun his chair around and looked at me, very serious. “Just forget about it.”

Odd reaction, I thought. “Who is he?”

Rick seemed annoyed. “We call him ‘Gus’. Nobody knows his name. We just call him Gus.”

Odd I thought. “Nobody knows him? And he’s wandering your building?”

“Yeah, we don’t know anything about him, and some of the other guys call him Gus, so that’s what I call him.” Rick paused, turned his head slightly, then looked me in the eyes. “Gus is dead!”

Rick then went on to explain the sightings of Gus, and sometime the interactions other employees of the radio station would have. Papers would be tossed off tables, your coat would be missing from the hook in the employee break room and be found elsewhere in the building, car keys moved if left out, and sometimes Gus would come by the window and look in, stone faceed, and would just stare. If you waved at him he would sort of crack a smile, turn, and leave. “Yeah, every so often he will screw with the elevator.”

“Yeah, the elevator in the back. He’ll press the buttons just to make it go up and down. Or he’ll press the emergency stop button which sets off the bell. We don’t use the elevator, and there is no reason to use it, but he just screws with it.”

“Wait a sec, you’re telling me that you have a ghost and Gus, and he screws with the elevator?”

“Dude! Don’t you know what this place was? Were you not curious why some guys call this place “the home.”

“I heard you mentioned it but never thought about it.”

“Old man Levinson purchased this building when he moved the radio station here. It was an old funeral home.” Rick then went on to explain that the elevator was used to take the bodies on gurneys down to the basement where the embalming room was located. Seeing my doubt, he put on a long album cut of Don Williams and we had 12 minutes to go look.

In the back of the building, by a pair of double doors leading to the outside, was an elevator. It was the kind like you would see in a hospital, longer than wide. We took the stairs because Rick said that sometimes, someone or something would emergency stop the elevator between the basement and 1st floor, and you would be trapped.

When we got to the basement it looked like what you might expect an embalming room to look like. Three stainless steel tables, a shelf of chemicals, some odds and ends of “tools,” rubber hoses, tanks of chemicals, all tile floors and walls. I was completely blown away, no freaked out. We went back up to the studio, and the first thing Rick said to me. “Hey, you had to ask. You started it.”

Over the next week I found out more about the place. Hy Levinson, the radio station owner, had purchased the old funeral home because he wanted some big rooms for the studios, and although a funeral home, this place fit the need, and was at the right price. Hy was cheap.

The station was 50,000 watt WCAR 1130AM in Detroit. Monster of a radio station! You can find it’s history on line.

At 4AM I figured I better leave, before the news department came in and Rick might get into trouble for having guests. Rick and I kept in touch for a long time, and filled me in on other things that happened afterwards; such as the girls in office having their hair played with while sitting at their desks, whispers in a quiet room, things being knocked off the tables, or a stack of papers would “blow” off a table with no breeze detected.

Many people who worked there had experiences. One who didn’t, but knew of the history, was George Noory of Coast to Coast AM. He was in the news department in the early 1970s. He’s talked about it being haunted, but never had an experience.

As I left the studio that night, I figure I would turn left at the end of the hall and hit the men’s room before my trip home, I lived about 30 minutes away and I needed to see a man about a horse.

As I turned the corner, I stopped in shock. “Gus” was about 20’ away, standing in front of the restroom door. I could see the word “MENS” through him. I turned around and hustled out of the place, and only went back one other time to sit with Rick. That time I witnessed his pen get knocked off the desk, followed by Rick’s angry comment, “Come on! Knock it off. I’m just trying to make a living.”

Rick was unphased by it, saying that he saw worse things in Nam. He also said nobody was ever harmed, and that three other “entities” were seen at times, including an old man dressed in 1940s style clothes, and a mustache, holding his hands in front of him, looking down. The room they would always see him in was where the body was viewed.” F

Room 315 And The Brutal Hauntings Of The Alaskan Hotel