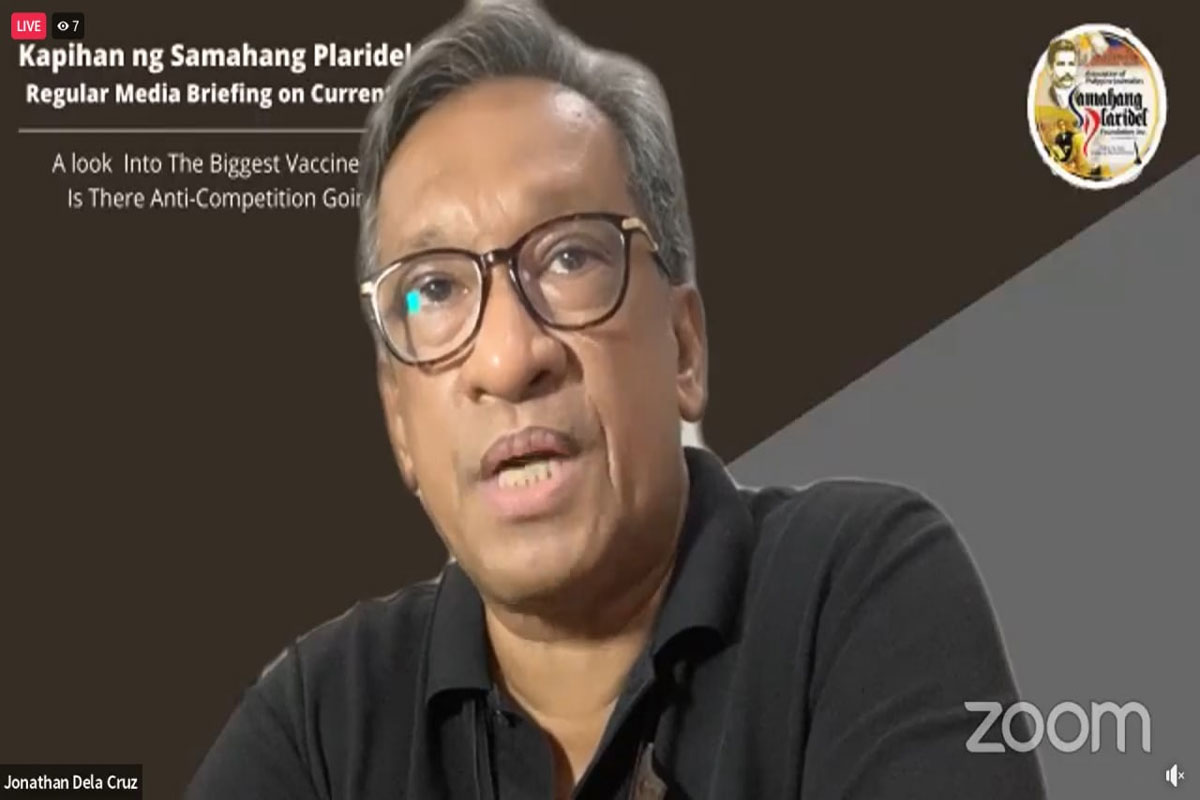 THE government is losing billions of pesos because of a near-marketplace dominance in the procurement of pneumococcal vaccines (PCVs), the largest vaccine tender in the world. PCVs are meant to prevent child pneumonia, one of the top killer diseases among children 5 years old and below. Based on a UNICEF study, one child dies every 39 seconds because of pneumonia.

Dela Cruz said in yesterday’s Kapihan ng Samahang Plaridel forum that the government has been overcharged billions of pesos by a single pharmaceutical company in the procurement of this vaccine. Because of this, UFCC filed a complaint before the Philippine Competition Commission (PCC) to investigate the alleged anti-competition practice.

As an example, he pointed out that U.S. biopharmaceutical company Pfizer did not have credible competition for the PCVs, but started to offer PHP 816 per single dose to capture the market.

Dela Cruz suspects that what seems to be a monopoly is happening as both Pfizer and Zuellig Pharma are offering and pushing the same PCV13 vaccine, locking out other potential players.

Dela Cruz questioned the effects of this suspected pneumonia vaccine monopoly, citing recent studies of the World Health Organization (WHO) declaring that there are three available PCV vaccines that are comparable and not inferior to each other.

Since 2014, the Philippines, through its childhood immunization program, has been using the more expensive PCV13 from Pfizer, despite WHO studies that showed that PCV10 is “non-inferior” or at parity with the PCV13 vaccines.

In 2020, there were calls to open up the PCV tender to other players, which up to that point was being dominated by Pfizer. The government, through the Department of Health (DOH), responded and opened the PCV bidding to other pharmaceutical corporations.

Dela Cruz said when the bidding was reopened and a new competitor for the PCV was considered, Pfizer again suddenly reduced its price from P 5.5B annually to just P2.6B in the new bidding. As other players came in, they continually lowered their price for the bidding.

Aside from the alleged monopoly, Dela Cruz revealed the other harmful dynamics from other players that occur during the biddings: “’Yung mga ibang big pharma ay kunwaring magka- kompetisyon, ngunit sa totoo lang ay mag-sweetheart o magka-kuntsaba . They collude and help steer the bidding of other pharma manufacturers so they can stay and dominate the procurement process.”

In the Kapihan discussion, Dela Cruz said another pharma — Zuellig Pharma — has started to acquire companies beyond the pharmaceutical sector, such as manufacturing and logistics, to try to corner the market.

“This tactic will further hold the government hostage in choosing them as the preferred PCV suppliers in the national formulary, while preventing the formation of a level-playing field that can give Filipinos more affordable choices when it comes to vaccines,” Dela Cruz pointed out.

The UFCC’s complaint before the PCC asked the independent anti-monopoly regulatory body to issue a cease-and-desist order and to temporarily suspend the procurement of PCVs while the investigation is still ongoing.