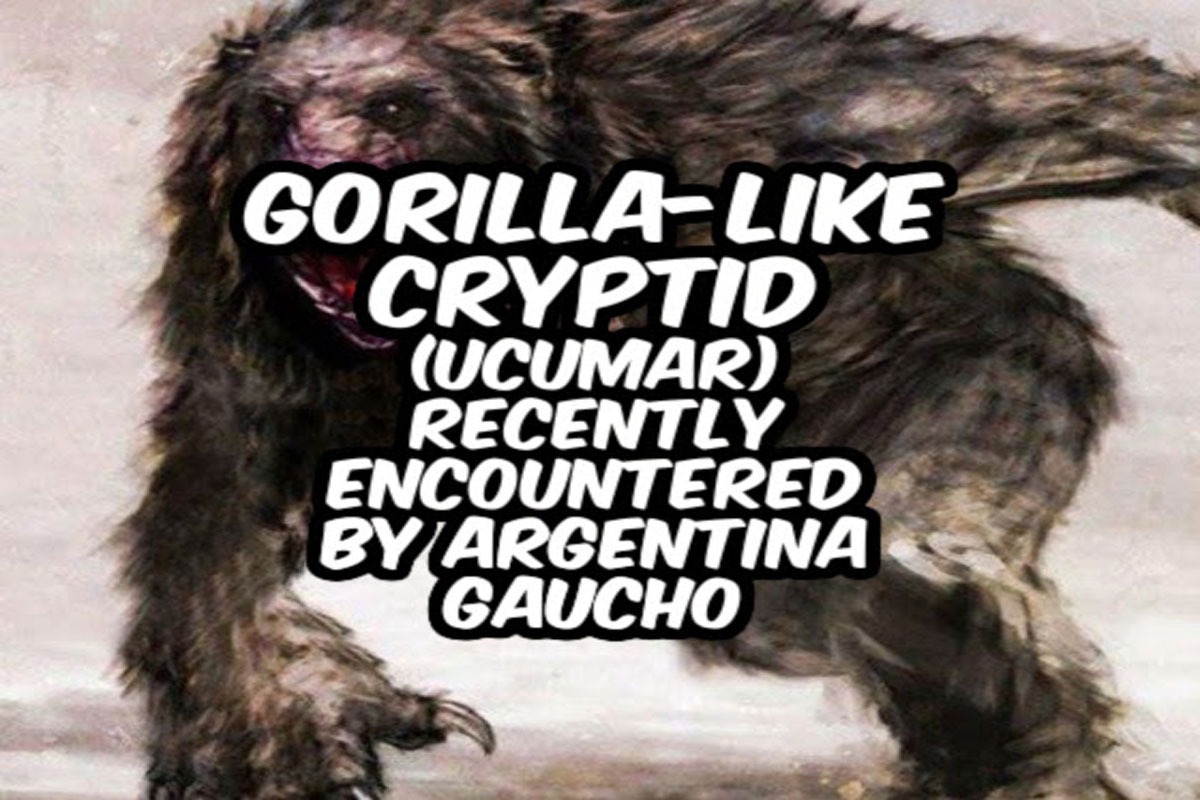 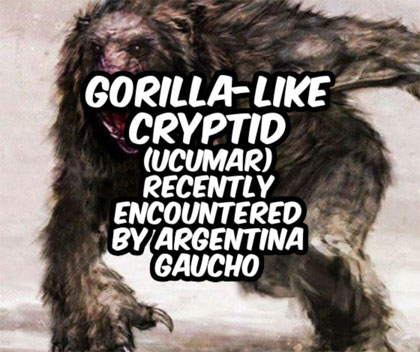 An Argentina gaucho describes an encounter that he had with a ‘Ucumar,’ a hairy hominid that is said to exist throughout the country. This incident occurred outside of the man’s home.

According to the Eltribuno.com in Argentina, a shocking account is being told by a baquiano from the Pasteadero area, a place located north of Metán, claimed to have clearly seen an ‘Ucumar’ in recent days. Argentina’s version of a hairy hominid.

“I had just finished watching a soccer game when I heard the dogs barking and they were very restless. So I went to the field with the flashlight and when it shined I saw with my own eyes something incredible, that I would never have imagined: that horrible thing was walking slowly and crossed the fence,” said the man who lives alone on a farm in the area.

“I didn’t try to follow him because I was so scared. I went back to the house and locked myself in, I couldn’t sleep all night.” This is the place where the Ucumar would have been seen.

The baquiano (gaucho) said that he grew up in the country and that he had never seen anything like it. “The dogs went towards that animal but backed up and went back towards the house.

Besides, the horses wanted to jump the fence and get out of that sector. It was a terrible thing,” he stated.

He described it as a gorilla or a large, hairy animal, about 1.70 meters tall. “That was not something human nor was it a common animal,” he assured.

Here are a few known accounts of encounters with these creatures:

2 separate witnesses observed an unknown hairy ape-like creature while on the forested trails near Rosario de la Frontera, Salta, Argentina. For decades, the beast has been seen by local witnesses.

In early 2001, two men training for the biathlon along the forested trails of Cerro Termal and a gaucho passing through the area on horseback, encountered an unknown creature 6 km east of Rosario de la Frontera, Salta, Argentina. The strange hairy beast has been the cause of numerous reports in Brazil, Paraguay, and Argentina since the late 1930s. Some people call it a ‘Mapinguari,’ others refer to it as the ‘Curinquean.’

The gaucho, surnamed Posadas, in charge of a farm owned by businessman Oscar Férez, was crossing the high and densely forested sector in the early hours when we ran into a strange being standing over two meters tall, covered in hair from head to foot, long arms ending in sharp claws, an oval-shaped head and an enormous mouth with menacing fangs.

Posadas did not wish to make any statements, but third parties to whom he retold his experience said that the man, impressed by the sight, got off his mount and reached for the shotgun on the saddle. But the hominid had vanished by the time he looked up again.

However, biathlete Humberto Sosa, 52, who has won over 100 events in regional and provincial competitions, did not hesitate to make known his extraordinary experience. “We were training with Susana Romano, 32. At around 17:00 hours, upon reaching a curve, we felt the crushing of branches from the hill. We stopped to see what it could be, and amid the foliage, we saw it briefly. It was a large animal, some kind of ape, moving with great agility.”

“Susana and I exchanged glances as though to confirm if what we’d just seen was a product of our imaginations or real. We remained still with our eyes riveted to the place where we’d seen it jump and become lost in the vegetation. We tried to listen, but everything remained silent. Suddenly, all of the birds flew away, as though fleeing from something. And once again, with the same speed as before, it jumped.”

“It was like a giant ape. We were scared and decided to run as quickly as possible toward the less forested area. However, that “thing” seemed to follow us, running parallel to us some 10 meters down the slope, through the wilderness, which is impossible for a human to do given the thickness of the vegetation. Through the leaves and branches we could see its enormous silhouette and every so often could hear how timber was violently shattered, which led us to believe that the creature’s weight was tremendous.”

Sosa, an electrician by trade, is a well-respected man in this city by virtue of his career, both as an individual and a sportsman. “I had heard and read people’s stories about this beast. I would laugh and I’ll admit to not believing anything that was said. What’s more, I ascribed all of those tales to some sort of collective hysteria or psychosis. However, now I have no doubt that what people said was true, since I experienced that terror in person.”

“It was evident that this critter was following us and I therefore feared it would attack us. I felt fear for my companion and asked her to run as fast as she could. I told myself that if the situation reached the brink, I’d give my life for her. We ran and ran, always feeling that the animal was running beside us among the dense woods. In a given area where the vegetation isn’t quite so dense and the possibility of observing was greater, we stopped to look around us. But the noise stopped and the jumping shadow that had followed us had vanished. In the distance, we could see that birds flocked together, as if frightened by something.”

Sosa added that he customarily trains at Cerro Termal in the company of a group of sportsmen. “This time we were only two, and it was our turn to undergo a traumatic experience. In my 30 years of covering these trails, I’d never seen anything like it.”

Protection for Bigfoot in Washington State