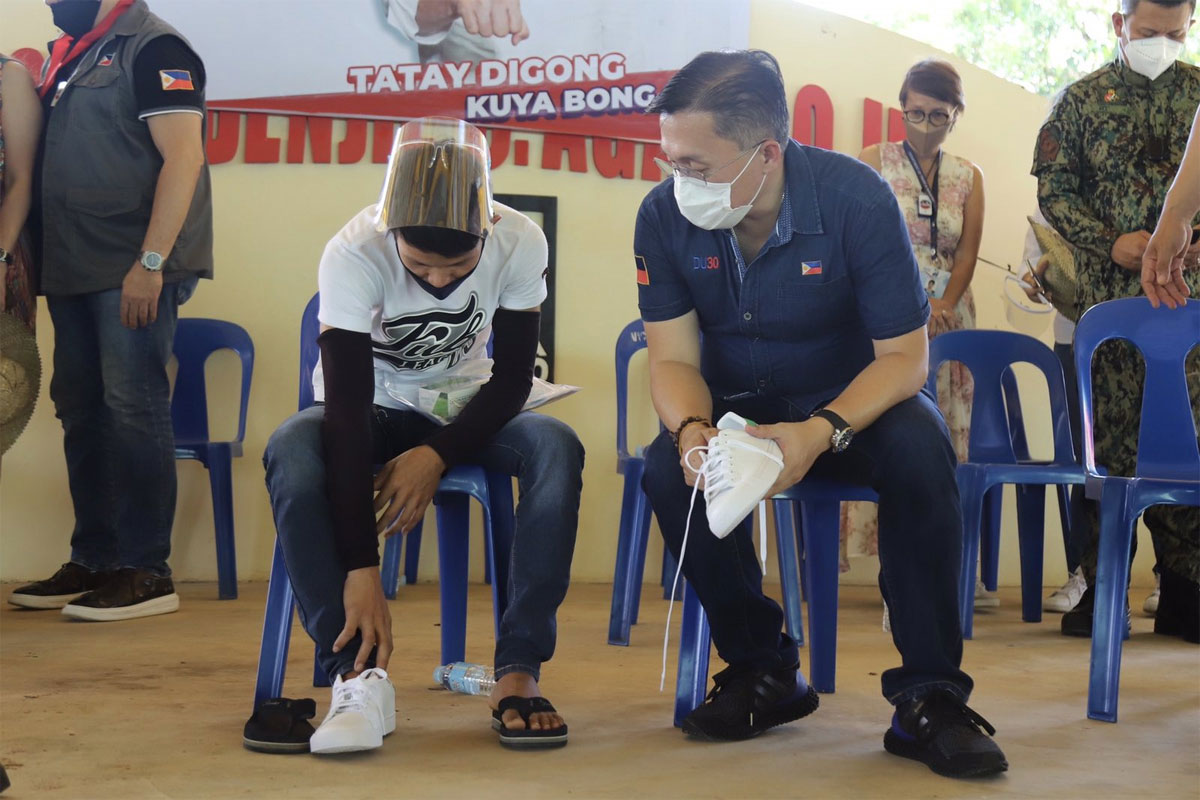 Go: Comply with COVID protocols at all times

AFTER providing aid to the frontline medical workers in Batangas City, Senator Christopher “Bong” Go visited the town of Cavinti in Laguna on Thursday, May 27, to personally meet with the town’s families and reassure them of the government’s continued commitment to their health, welfare and safety in this time of need.

His team handed out meals, food packs, vitamins, masks and face shields to a total of 1,500 beneficiaries at the Barangay Kanluran Talaongan New Covered Court. A second batch composed of 1,500 other beneficiaries was also given the same aid the following day.

Moreover, selected recipients received new pairs of shoes while those commuting to work were given bicycles. Others were provided computer tablets so their children can carry out their blended learning activities while studying at home.

Representatives from the Department of Social Welfare and Development were likewise present and distributed financial assistance as part of an ongoing effort by the government to alleviate the impacts of the ongoing crisis on vulnerable communities.

The Senator advised residents in need of medical care to avail of the services of the Malasakit Center located at the Laguna Medical Center in Santa Cruz or the San Pablo City General Hospital in San Pablo City. The latter was launched in a ceremony conducted last May 20 with Go attending as a special guest.

The center is a one-stop shop where patients may conveniently avail of medical assistance from the DOH, DSWD, Philippine Health Insurance Corporation, and Philippine Charity Sweepstakes Office.

The primary aim of the Malasakit Center is to reduce a patient’s hospital bill to the lowest possible amount by covering various services and expenses. As of writing, the centers have benefited over two million Filipinos, with 116 branches established nationwide.

On this note, Go encouraged the public to support the government’s COVID-19 vaccination effort by getting registered and availing of the vaccines once they are eligible under the prioritization framework.

The Senator went on to express his gratitude to the local officials for their tireless service during the pandemic and recent crises. Among those present during the activity were 4th District Representative Benjamin Agarao; Mayor Milbert Oliveros; Vice Mayor Arrantlee Arroyo; and Councilors Ulysses Bituin, Elma Flores, Anita Baeyens, Pedro Villegas, Jimmy Oliveros, Crispin Sanchez, Marlon Villanueva, and Rosemarie Esperanza.

In keeping with his commitment as an ‘adopted son’ of CALABARZON, Go continues to provide assistance to the residents of Laguna whose lives have been adversely affected by the ongoing crisis. He supported the funding for the construction of a new multi-purpose building in Barangay Inao-Awan, as well as other infrastructure projects in the area to boost regional development.

In 2019, Go was declared an ‘adopted son’ of CALABARZON by the region’s governors. In a manifesto, they cited his 21 years of service as a trustworthy and dependable assistant of President Duterte. They noted his “heart for his country” through the projects he initiated, including the Malasakit Centers program, which have benefited millions of Filipinos.

The Senator expressed his gratitude and said that the province of Laguna can consider him as their neighbor. He said that even if he grew up in Davao City, he also considers himself a Batangueño because of his grandparents who were from Sto. Tomas and Tanauan, Batangas.

His office also held a relief activity for over one thousand members of the local Tricycle Operators and Drivers’ Association in Pila last May 20. All activities were conducted in smaller batches to ensure the government-issued health and safety protocols against COVID-19 are strictly observed.