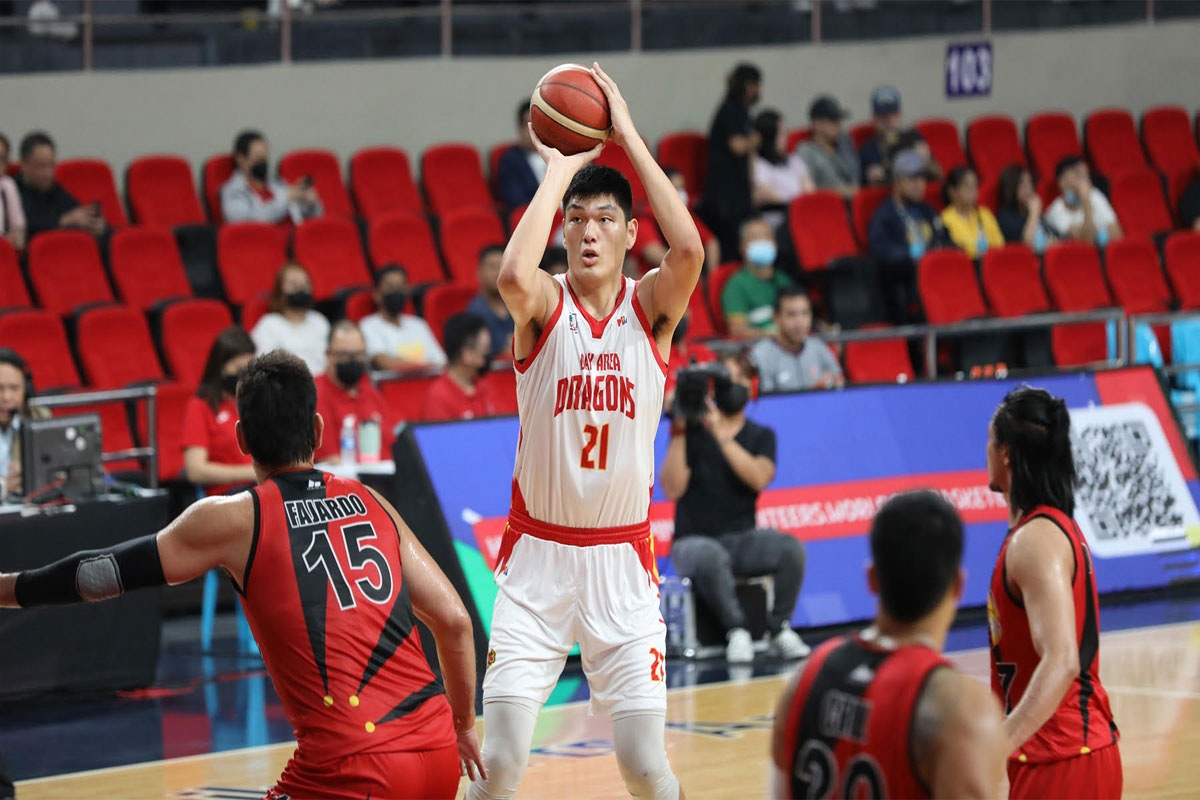 Chuanxing Liu of Bay Area Dragons takes an aim for the basket, while June Mar Fajardo of San Miguel Beer looks on in the PBA Commissioner’s Cup semifinal action at the Philsports Arena in Pasig. The Dragons defeated the Beermen. PBA photo
Basketball,

KOBEY Lam hit the game-winner with seven seconds left and Bay Area batttled back from a 16-point deficit to bring down San Miguel Beer, 103-102, in the PBA Commissioner’s Cup semifinals at the PhilSports Arena in Pasig City.

Lam made the winning layup on an assist by Glen Yang with seven seconds remaining and watched San Miguel import Devon Scott miss a fadeway shot as the Dragons escaped with the victory after outscoring Beermen, 25-13, in the fourth quarter.

Former NBA player Andrew Nicholson recorded a double-double performance with 30 points on 12-of-20 shooting and 15 rebounds in 45 minutes of action for Bay Area.

Songwei Zhu added 19 points and seven assists, Hayden Joel Blankley contributed 15 points and nine rebounds and Mingxin Ju had 13 points for the Dragons on 5-of9 shooting in nearly 28 minutes.

J Perez had 24 points, seven rebounds and two assists and Terrence Romeo had 21 points and four rebounds in a losing effort for San Miguel.

Six-time MVP June Mar Fajardo finished with 11 points, including a putback that put the Beermen ahead, 102-99 with still 50 seconds left.

Blankley scored on a short stab to pull the Dragons to within 101-102 with 32 seconds left before Lam nailed the go-ahead basket on a fastbreak layup to steal the win.

“I think the other teams think they can push us around and we’re young,.That Filipino toughness and that was the test early. They’re gonna come at you, they’re going to be physical and try to intimidate,” said Bay Area coach Brian Goorjian, whose father passed away recently.

“But we’ve grown (through) it all. And I’m most proud of how they got on top of us but we never quit, we stayed in the game, we never let it go,” added Goorjian.

What made things difficult for San Miguel was the foul trouble of Fajardo, who was whistled.for his fifth foul barely three seconds back in the fourth canto.