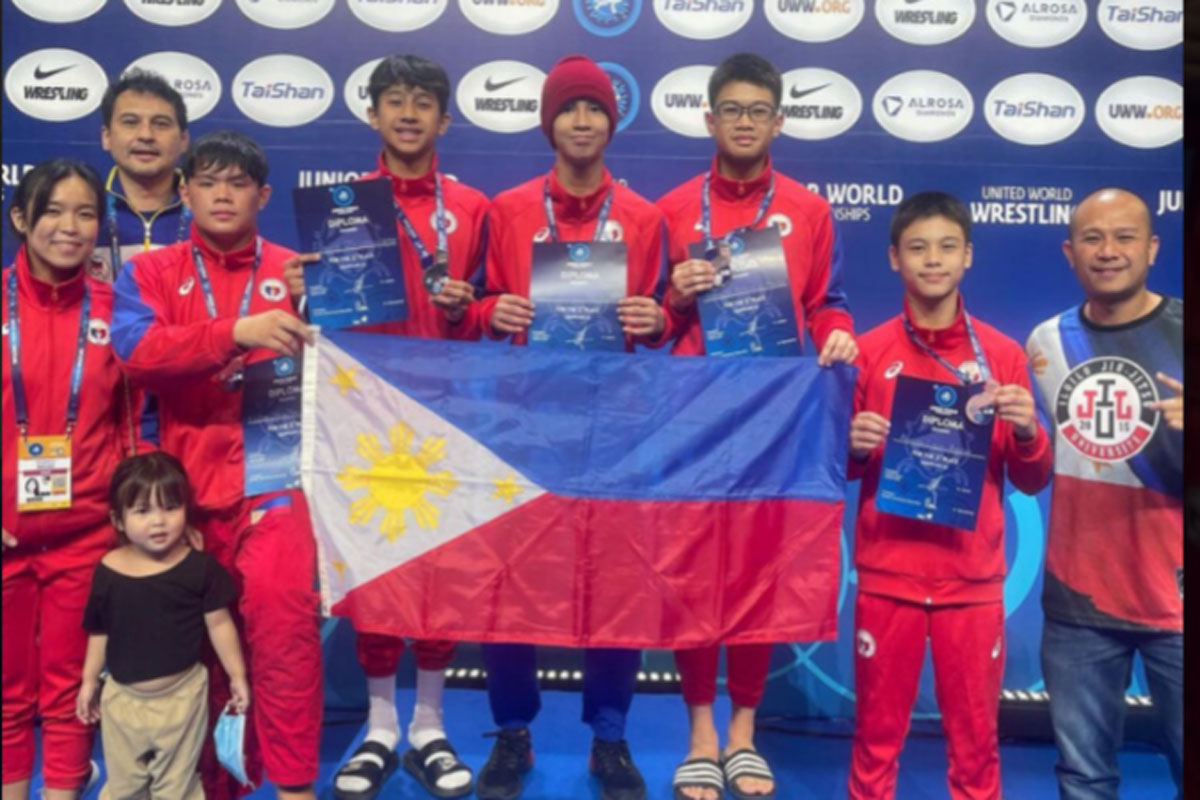 THEY came, they saw, they conquered.

And just like when Roman general Julius Caesar used the phrase in describing his swift and conclusive victory, Wrestling Association of the Philippines president Alvin Aguilar can very well use the same in recounting the success of his “Fab Five” in the 2021 United World Wrestling (UWW) Cadet/Junior World Grappling Championships in Ufa, Russia last August 13-14.

The Filipinos brought home nine medals — three silvers and six bronzes — in a performance that earned them comparison with the popular Korean boy band BTS.

“It was a dream come true for all of us, especially the boys who worked long and hard for this opportunity to compete in Russia,” said Aguilar during the 122nd edition of the “Usapang Sports on Air” by the Tabloids Organization in Philippine Sports (TOPS) via Zoom last Sept. 30.

“Everyone under the sun wanted us to forge this dream. They thought it was crazy to take the risk of travelling all the way to Russia with this pandemic,” recalled Aguilar during the weekly public service program sponsored by the Philippine Sports Commission (PSC), Philippine Amusement and Gaming Corporation (PAGCOR) and Games and Amusements Board (GAB).

“But after watching the Olympics in Tokyo first hand, I know it is really something we have to do. The athletes also stayed with their dreams and did not allow anything get in their way,” added Aguilar.

“I knew it was worth the risk.”

Aguilar admitted the prevailing health situation due to the threat of the coronavirus made the training and preparation of the athletes even harder.

“Unang-una, mahirap talaga mag-train in this kind of situation. So ang ginawa namin, we just locked in a private gym in Parañaque with the permission of their parents. We have to make it happen. Nobody in, nobody out,” added Aguilar, also the founder of the Universal Reality Combat Championships (URCC).

“Pati pagpunta sa Russia, madami din naging challenges sa team dahil nga sa pandemic at mga restrictions. Pagdating naman sa Ufa, we had our own testing upon entry in the dormitory, which is only beside the competition area. Once inside, hindi ka na basta makalalabas para pumunta kung saan,” recalled Aguilar, who flew straight to Moscow from Tokyo where he attended the Olympics.

Del Rosario, who captured two of the country’s three silver medals in the under-46 category of Gi (freestyle) and No-Gi (no-uniform) events, also said the long hours of training and preparations helped him a lot.

Zaldarriaga, who bagged the silver medal in 39-kilogram division of the No-Gi and bronze in 42-kg No-Gi, said the opportunity to represent the country provided the inspiration for him to strive harder.

“It was also my first time to compete outside the country and the competition there in Ufa was very good,” said Zaldariagga.the 15-year-old pride of Iloilo.

An incoming Grade 10 student of Ateneo de Iloilo, Zaldarriaga was also impressed by the conduct of the tournament.

“I think it was very well organized,” said Zaldarriaga, whose father Zony is also the head of the DEFTAC Ribeiro Jiu-jitsu Iloilo.

Marte, Afan and Aguilar, who also brought home the bronze medals in their respective events, expressed confidence that their experiences in Ufa would help a lot.

“It’s really a once-in-a-lifetime experience for me. It was fun and exciting,” said Marte, who pocketed the bronze medals in both the Gi and No-Gi events in the 58-kg category.

“It was not the first time that I competed abroad, but for grappling, it was my first time. It was great to be there in Russia with the best grapplers in the world. I made sure that I enjoyed my stay,” added Marte, also a mainstay of the De la Salle University taekwondo team.

Afan, who earned the bronze in the Gi 85-kg class, said he enjoyed the Ufa experience.

“Masaya kaming lahat. We went there as a team and we enjoyed competing against the other athletes from other countries ” said Afan.

Aguilar, the bronze medalist in the Gi and No-Gi categories in the 50-kg division, called it a wonderful experience.

“It was my first time also competing outside the country for wrestling and jiu-jitsu. I thought it’s very challenging to go against people stronger than us and we got to go to Russia, which is a very nice country. They’re one of the best in wrestling and jiu-jitsu in the world,” claimed Aguilar, adding his father Alvin also helps him a lot in training.

“It was really a wonderful experience for all of us,” added the young Aguilar.

Aguilar and his “Fab Five” shared their success to all those who helped them even during the pandemic.

“The Philippine Olympic Committee (POC), headed by President Abraham “Bambol” Tolentino, helps us a lot. I think we’re now in Golden Age of Philippine sports because of Tolentino,” said Aguilar.

“There’s also the Philippine Sports Commission (PSC), headed by Chairman William “Butch” Ramirez. There’s PAGCOR, which also helps us a lot in all our needs. My wife-coach Maybelline Masuda, Coach Michael Tabamo, and Coach Tony Zaldarriaga. Also Coach Lester, who brought the kids together under his guidance and supervision at DEFTAC Marikina,” said Aguilar.

With such a talented and dedicated batch of young athletes and support and encouragement from PAGCOR and other sports-loving friends, Aguilar believes the best is yet to come for Philippine grappling. With reports from Gab Ferreras