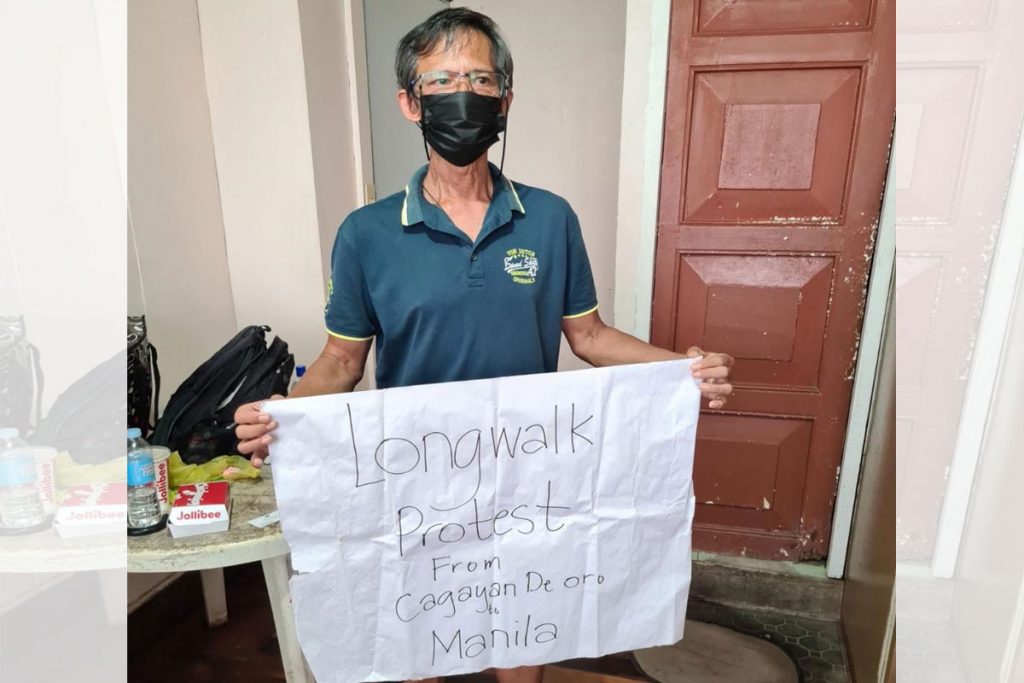 SENATOR Christopher “Bong” Go assured an aggrieved retired police officer that he will bring to the attention of President Rodrigo Duterte the cop and his colleagues’ concerns regarding disability benefits.

Hector Fernandez, a former sergeant of the Philippine National Police (PNP), is taking part in a long protest walk from Manolo Fortich, Bukidnon to Malacañang Palace in Manila to persuade Duterte to overturn a decision by the Department of Budget and Management (DBM) to suspend their disability benefit. The benefit or support was suspended to guarantee that PNP officials did not receive double compensation of benefits.

The DBM ordered DILG Secretary Eduardo Año in November 2019 to take necessary steps to halt the provision of double compensation of disability and death benefits to PNP officers.

The National Police Commission responded in December 2019, citing the legal reasons for the separate distribution of police benefits under the NAPOLCOM-managed PNP Welfare Benefits Program and the PNP Retirement Benefits Program, stating that these payments may not be considered double remuneration.

However, on January 14, the Commission on Audit (COA) stated in an Audit Observation Memorandum that the said benefits amounts to double remuneration. The COA also recommended that all PNP welfare benefits be stopped immediately in all NAPOLCOM offices.

Go has said that he is willing to act as a mediator to find a win-win solution to the problem. “Ako naman po, handa akong pumagitna bilang Vice Chair ng (Senate) Public Order and Dangerous Drugs (Committee),” said Go.

Due to the current COVID-19 pandemic, Go also urged Fernandez to postpone his protest walk for the time being. Instead, he offered him transportation if he still wanted to go to Manila.

The former PNP personnel was forced to retire in 2011 after sustaining a spinal cord injury while participating in a police operation in Nueva Ecija to combat unlawful gambling.

In the evening right after the interview, Go arranged a conference call with President Duterte, Secretary of Justice and Hector. Hector was very grateful for the opportunity given by Go to speak to the President and iterate his concerns.

In the call, the President asked Hector to stop punishing himself since the government is always here to listen to his concerns. Duterte also asked SOJ to explain the constitutional provision regarding double compensation to Hector and the current jurisprudence stating that pension benefits is within the ambit of double compensation.

Justice Secretary Guevarra emphasized that there will still be benefits for retired policemen with disabilities but only NAPOLCOM is allowed to disburse such. The SOJ stated that Hector may elevate his concerns to the appropriate courts.

Duterte also stated that he will find a way to help Hector. He told Hector that only the courts can decide on the matter. The President reiterated his love for the policemen, and as such he will provide a private lawyer free-of-charge for Hector in order for Hector to settle the legal issue regarding pension benefits to the courts.

The President also stated that he and Go will provide some financial assistance to Hector in order to help him.

As of August 8, Fernandez decided to end his long protest walk. He is currently staying at a hotel in Gingoog City, Misamis Oriental and will return to his hometown in Mambatangan, Bukidnon the following day. The PNP has already pledged to transportation assistance for him.

Go continues to promote the rights and welfare of uniformed personnel. In July 2019, he filed Senate Bill 393 which aims to provide free legal assistance to police and military officers for cases related to the fulfillment of their duties.

The senator also pushed for the enactment of Republic Act No. 11549 which modifies the minimum height requirements for applicants to the Philippine National Police, Bureau of Jail Management and Penology, Bureau of Fire Prevention, and the Bureau of Corrections.

Go said he hopes for the measure to help augment and strengthen the country’s law enforcement and firefighting forces, and other first-responders in times of emergencies and calamities.