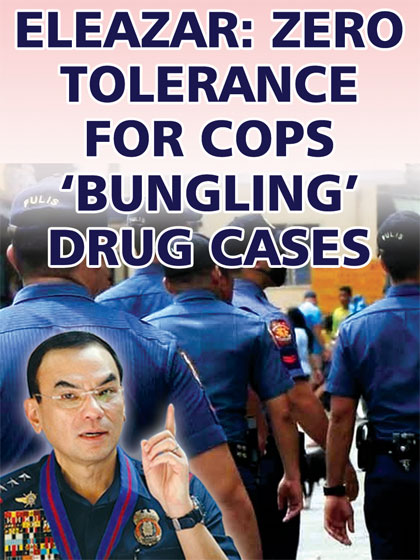 PHILIPPINE National Police (PNP) chief, General Guillermo Lorenzo T. Eleazar yesterday reiterated their zero-tolerance policy on any member of the force who will be found ‘bungling cases for violation of Republic Act 9165 or the Comprehensive Dangerous Drugs Act of 2002 despite the Duterte government’s massive war on drugs and effort by the PNP to further improve its drug conviction rate.

The PNP chief said criminal and administrative complaints await any police personnel who will be accused of the serious offense regardless of their rank and position. “We are very strict when it comes to our personnel who are themselves violating our anti-narcotics laws and operational procedures when it comes to investigating and prosecuting drug offenders,” he told the Journal Group.

Gen. Eleazar reiterated his policy as the PNP Integrity Monitoring and Enforcement Group (PNP-IMEG) headed by Brigadier Gen. Flynn E. Dongbo announced the arrest of a ranking official of the Police Regional Office 9 (PRO9) wanted for ‘bungling’ cases for violation of RA 9165 filed by his men against a number of local drug traffickers.

In a report to the PNP chief, Dongbo identified the accused as Lieutenant Colonel Nonito Asdai, a 55-year old resident of Blue Homes Subdivision in Bgy. Mercedes, Zamboanga City.

Brig. Gen. Dongbo said the accused was arrested on the strength of a warrant of arrest for violation of Section 92 of RA 9165 issued by Judge Shene Chiong Cañete of the Zamboanga City Regional Trial Court (RTC) Branch 35 last Friday.

Section 92 of RA 9165 refers to ‘delay and bungling in the prosecution of drug cases.’

It says that “any government officer or employee tasked with the prosecution of drug-related cases under RA 9165, who, through patent laxity, inexcusable neglect, unreasonable delay or deliberately causes the unsuccessful prosecution and/or dismissal of the said drug cases, shall suffer the penalty of imprisonment ranging from twelve (12) years and one (1) day to twenty (20) years without prejudice to his/her prosecution under the pertinent provisions of the Revised Penal Code.’

A P200,000 bail was recommended by the court for the temporary liberty of the official who was already nearing his retirement when he was arrested in his house 9 a.m. Saturday by members of the IMEG Mindanao Field Unit, PNP Criminal Investigation and Detection Group,PNP Drug Enforcement Group, Zamboanga City Police Station and the Police Regional Office 9 (PRO9) under Brig. Gen. Ronaldo Genaro E. Ylagan.

According to Dongbo, the suspect was accused of allegedly bungling several drug cases handled by the Zamboanga City Police Station 6 which he used to head. The PNP-IMEG director said he was informed by IMEG-MFU Team 9 chief, Major Jolly Sabtal that several Police Non-Commissioned Officers under Asdai who were also charged for the same offense are set to be arrested once the court issues warrants of arrest against them.

The police official is now being held at the CIDG Regional Field Unit 9 office.

Section 91 of RA 9165 is also very strict when it comes to the ‘responsibility and liability of law enforcement agencies and other government officials and employees in testifying as prosecution witnesses in dangerous drugs cases.’

The law says that ‘any member of law enforcement agencies or any other government official and employee who, after due notice, fails or refuses intentionally or negligently, to appear as a witness for the prosecution in any proceedings, involving violations of RA 9165, without any valid reason, shall be punished with imprisonment of not less than twelve (12) years and one (1) day to twenty (20) years and a fine of not less than five hundred thousand pesos (P500,000) in addition to the administrative liability he/she may be meted out by his/her immediate superior and/or appropriate body’

The same law also states that “the immediate superior of the member of the law enforcement agency or any other government employee mentioned in the preceding paragraph shall be penalized with imprisonment of not less than two (2) months and one (1) day but not more than six (6) years and a fine of not less than ten thousand pesos (P10,000.00) but not more than fifty thousand pesos (P50,000) and in addition, perpetual absolute disqualification from public office if despite due notice to them and to the witness concerned, the former does not exert reasonable effort to present the latter to the court.”

RA 9165 also states that “the member of the law enforcement agency or any other government employee mentioned in the preceding paragraphs shall not be transferred or re-assigned to any other government office located in another territorial jurisdiction during the pendency of the case in court.”

However, the concerned member of the law enforcement agency or government employee may be transferred or re-assigned for compelling reasons: Provided, That his/her immediate superior shall notify the court where the case is pending of the order to transfer or re-assign, within twenty-four hours from its approval;

Provided, further, That his/her immediate superior shall be penalized with imprisonment of not less than two months and one day but not more than six years and a fine of not less than ten thousand pesos (P10,000) but not more than fifty thousand pesos (P50,000) and in addition, perpetual absolute disqualification from public office, should he/she fail to notify the court of such order to transfer or re-assign.