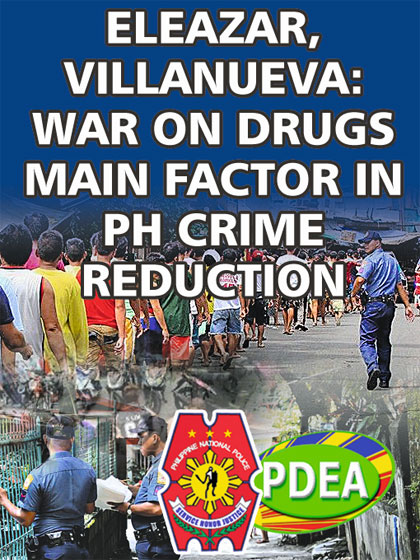 THE Philippine National Police’s (PNP) war on drugs over the past five years of the Duterte administration has played a major role in the significant reduction in the so-called Eight Focus Crimes in the country from June 2010 to June this year, PNP chief, General Guillermo Lorenzo T. Eleazar made clear yesterday.

“While there are other factors that led to the significant decrease in crime in the past five years, the top cop stressed that the PNP’s relentless anti-illegal drug operations and their drive to put a stop to the illegal drug trade played a pivotal role in it.

“Maraming alegasyon, batikos o kritisismo ang ipinupukol sa Pangulong Duterte but if we are to look at the peace and order situation in the whole country which is our barometer, napakalaki ng ikinabuti at ikinaganda nito at mismong ang ating mga kababayan ay nararamdaman ang pagbabago,” Gen. Eleazar said.

He was referring to the major reduction in the Eight Focus Crimes in the country from July 10 to June this year which the PNP chief said was a clear indication that their strategies n preventing and fighting criminality are working well.

The PNP chief said that apart from the major crime reduction during the past five years of the Duterte administration, they also have recorded a significant increase in their Crime Solution Efficiency (CSE) and Crime Clearance Efficiency.

“Despite the great odds and seemingly overwhelming challenges, we will continue to deliver quality and professional services for the benefit of our main clientele—the Filipino people because as public officers, we owe it to them and our beloved country,” the PNP chief added.

Another part of the effective anti-crime campaign, according to the top cop is timely intervention based on the situation on the ground and innovations that would promote healthy cooperation between the police and the community.

“With almost all Filipinos going online due to the COVID-19 pandemic particularly social media for instance, the PNP chief initiated web-based platforms that include E-Sumbong which uses even Facebook in reporting crime and seeking police assistance, and Project E-ACCESS through the PNP Ani-Cybercrime Group, which gives netizens access to information regarding cellular phone numbers, e-mails and social media accounts that are being used for illegal online activities.

The number of crimes against properties also declined by as much as 65.55 percent as data disclosed that during the previous administration, crime against property went as high as 655,345 compared to the records under President Duterte’s administration wherein the PNP tallied only a total of 225,752 property-related cases.

Official PNP records showed that from January to June 2020, there were a total of 21,716 Eight Focus Crimes recorded nationwide although the number from January to June this year was pegged at only 18,113 which is 3,603 incidents less compared to last year’s figures or a 16.59 percent reduction.

The Average Monthly Index Crime Rate during the 2020 period was 19.14 compared to the average 18.04 AMICR this year or a 5.75 percent reduction.

Gen. Eleazar and Philippine Drug Enforcement Agency (PDEA) chair, Director General Wilkins M. Villanueva said they are also highly convinced that the government’s war on drugs is a success based on the much improved peace and order situation in the streets and most importantly, the big number of barangays in the country which have been declared as ‘drug-cleared’ since July 2016.

The PNP leadership has attributed the major reduction in index crimes to the campaign on drugs noting that before, majority of these crimes were committed by people who are high on drugs or are into illegal substance abuse.

“Even the President had said that talagang masalimuot ang giyera sa droga but one parameter of success we consider is our crime situation. Talagang napakalaki ng pagbaba ng street crimes sa buong bansa and our official records will prove that,” Gen. Eleazar said.

Director General Villanueva also cited the very big number of barangays in the country which have been declared as ‘drug-cleared’ as a major factor in their assertion that the Duterte administration’s war on drugs is a success.

Director General Villanueva said that official RealNumbersPH Year 5 record will show that out of the 42,045 barangays in the country, a total of 22,093or 52.55 percent have been declared as ‘drug-cleared’ based on government parameters.

Another 13,210 or 31.42 percent of the total are yet to be ‘cleared’ to date although Villanueva expressed optimism they would be able to clear more by the end of the year.

“Isipin ninyo na na out of the more than 42,000 barangays in the country, some 13,000 na lang ang affected ng droga, meaning me mga presence ng pushers and users but we are optimistic that by the end of the year, baka mabawasan pa kaya nga nagdo-double time kami,” the PDEA chief said.