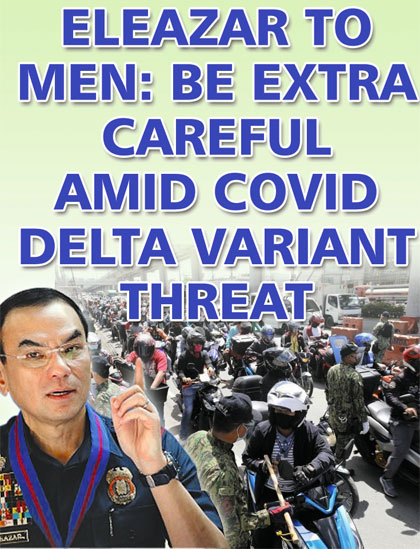 SAYING there is no ‘miracle cure’ for the disease, Philippine National Police (PNP) chief, General Guillermo Lorenzo T. Eleazar yesterday told his men to be extra cautious as they continue their anti-criminality campaign while strictly enforcing IATF health protocols in NCR Plus and the rest of the country to help reduce the further spread of COVID-19 especially its more dangerous Delta variant.

Lt. Gen. Vera Cruz said that five of those who died were found to have already been given their first dose of vaccine but have existing comorbidities.

There are already three Delta variant case in the force, all of them having tested positive for COVID-19 last July before undergoing a 14-day isolation.

However, they were discovered anew to be positive for the Delta variant during a subsequent test. Lt. Gen. Vera Cruz said that the results of the genome sequencing of the three were released only this month.

Thus, the three who are all assigned at the PNP Aviation Security Group were ordered to undergo another RT-PCR test.

One of the three tested anew for the virus and has been admitted in a government quarantine facility while the 2nd tested negative for the disease but was asked to go on home quarantine.

The result of the test conducted on the 3rd policemen is yet to be released. However, he is also under home quarantine already.

Lt. Gen. Vera Cruz said that persons who are considered ‘close contacts’ of the three have already tested negative for the virus.

Based on the recent data released by the Joint Task Force COVID Shield, more than 40,000 violators have been accosted in the first seven days of the Enhanced Community Quarantine implementation in Metro Manila—or a daily average of 5,759.

The PNP also tallied 2,398 non-Authorized Persons Outside of Residence (APORs) violators in Metro Manila, averaging to 343 per day, while 3,228 Non-APOR Violators were sanctioned in NCR Plus averaging from 539 per day.

As soon as the Delta variant was monitored in the country last month, Gen. Eleazar immediately ordered the PNP-ASCOTF to prepare for worst-case scenarios to ensure the welfare of all policemen, especially those assigned on the ground.

He also appealed to the public for cooperation with government’s health protocols.

The PNP chief also disclosed that a number of cops have already been inoculated against COVID-19 but this is not a reason to grow complacent in observing health protocols.

Further, he told police commanders to ensure the cleanliness and orderliness of their police stations to prevent transmission of the coronavirus.