Eleazar: PNP wants dialogue with SC to iron out guidelines 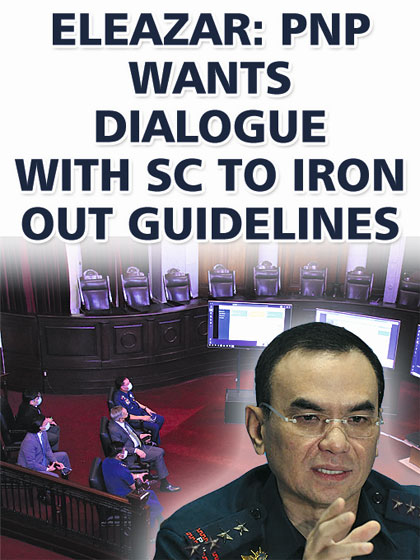 THE Philippine National Police (PNP) leadership is seeking another dialogue with the Supreme Court (SC) headed by Chief Justice Alexander Gesmundo to address concerns raised by the police over some guidelines on the mandatory use of body cams when it comes to serving arrest and search warrants, General Guillermo Lorenzo T. Eleazar said.

The top cop said they are pressing for the dialog amid reservations raised by members of the PNP Technical Working Group created to incorporate some of the High Tribunal rules on the use of body-worn cameras into Police Operational Procedures.

“We have issues and concerns that we want to raise with SC justices, he said, one of which is the SC ruling which requires police to use at least two alternative recording devices in the absence of body cameras.

Officials said that under the new SC rules, it would be mandatory for policemen involved in law enforcement operations including serving warrants of arrest and conducting anti-narcotics operations to have mobile phones dedicated for such purpose only.

Another concern raised by members of the TWG is that policemen implementing search warrants or making an arrest could be at risk if they use cell phones to record their operations in the absence of a body cam.

“Paano ‘yung pagsugod mo nakahawak ka ng cell phone hindi ba? So hindi siya designed for that,” Eleazar said in noting the possibility that the lives of officers recording their operations with a mobile phone could be in danger especially when they are dealing with ‘armed and dangerous criminals.’

The PNP chief said that another issue they want to tackle with the SC is the requirement to videotape all their operations and submit them to court as part of evidence by the prosecution.

“You could just imagine that every apprehension that we will make ay meron tayong parang storage device or USB drive,” said Gen. Eleazar.

The top cop also pointed out that the PNP-TWG is currently working to help incorporate the SC rules on the use of body-worn cameras by the police on their Police Operational Procedures.

Another matter which the PNP wants to discuss with the High Tribunal is the SC decision to scrap the power of Manila and Quezon City-based judges to issue search warrants outside their jurisdiction.

In many cases, police have used search warrants for violation of Republic Act 9165 or the Comprehensive Dangerous Drugs Act of 2002, RA 10591 or the Comprehensive Firearms and Ammunition Regulations Act of 2013 and RA 9516 or illegal possession of explosives issued by Manila and Q.C. Regional Trial Courts to raid their targets outside of Metro Manila specifically in Calabarzon, Central Luzon and Mindanao regions.

Gen. Eleazar said that they have sought the nod of Q.C. and Manila courts in raiding major drug and weapons’ targets in the provinces as they are fully aware of ‘leakages’ that could jeopardize the conduct of operations once the search warrants come from the provinces where the targets reside and where they are known to be influential.

The PNP reservations on some of the new SC rulings cropped up as the PNP-TWG began working to incorporate the rules crafted by the High Tribunal into official PNP guidelines on the use of Body-Worn Cameras or BWCs especially in the conduct of drug arrests and seizures.

The PNP chief said that the TWG will also come up with modules that will be used in the training and seminar programs on all the legal aspect of the use of BWCs to the police units which received the units last month.

The PNP launched the BWC System on June 4 to ensure transparency and legitimacy of law-enforcement operations. Initially, a total of 2,696 body cameras have been distributed to 171 police stations and offices.

The High Tribunal said that the failure of law enforcers to comply with the new rules will render the evidence seized inadmissible for the prosecution of the offense for which the search warrant was applied.

Law enforcers who fail to wear, interfere with or manipulate the camera shall be held liable for contempt of court. The new rules also require law enforcers to wear at least one body camera and one alternative recording device.

Currently, the PNP still needs more or less 30,000 BWC units to cover the entire police stations and units of the national police force.

Gen. Eleazar said that the PNP is already coming up with an information kit on the BWCs that would be given to the potential donors in order to ensure that those which would be donated are compatible with the system that was delivered to the PNP early this year.

The top cop said they still need approximately 30,000 more sets of BWCs in order to cover all police stations and units of the police organization. Each BWC set costs approximately P2 million, which include 16 cameras and other accessories.

He said the initial objective is to equip the Provincial and Station Drug Enforcement Units as well as the National Support Units that include the Criminal Investigation and Detection Group, the Maritime Group and the Highway Patrol Group.

Why investing in healthcare and technology is a good idea