Eleazar: PNP to fully cooperate with NBI in probing deaths from anti-drug ops 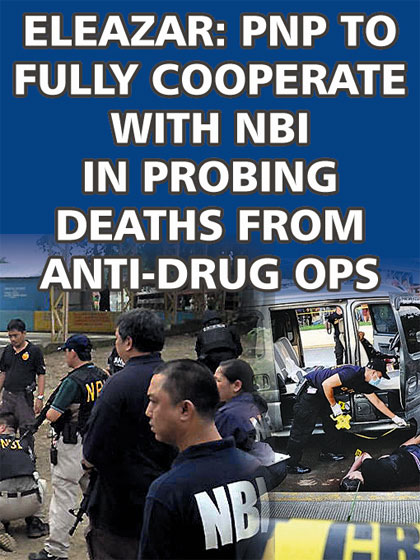 PHILIPPINE National Police (PNP) chief, General Guillermo Lorenzo T. Eleazar yesterday assured the full cooperation of his men with the National Bureau of Investigation (NBI) which has been tasked by the Department of Justice (DOJ) to investigate deaths relating to the government’s war on drugs since 2016.

The top cop said they also fully support the initiative of the DOJ in drafting a memorandum of agreement in the conduct of the joint investigation by the PNP and the NBI on deaths that have taken place in police anti-narcotics operations.

Gen. Eleazar said the MOA would further strengthen the coordination and information-sharing between the PNP and the NBI in ferreting out the truth regarding the allegations of human rights violations in the conduct of illegal drugs operations.

“We welcome this development and we are confident that this agreement, once signed, would be of great help in ensuring a speedy and accurate resolution of cases that are currently reviewed and those which would be included later in the investigation,” he said.

From July 1, 2016 to last August 31, government anti-drug operations led to the killing of 6,191 persons, majority of them armed suspects who reportedly engaged undercover officers in gunfights while about to be arrested. Over a dozen policemen were also shot dead by ‘armed and dangerous’ drug dealers during the period.

“This is another milestone in our efforts to strengthen transparency and accountability in the police organization which are both important in our goal of upholding the integrity of the Philippine National Police,” Gen. Eleazar said.

According to DOJ Secretary Menardo Guevarra, the DOJ will help the PNP and the NBI in drafting the formal memorandum of agreement regarding the joint investigations.

Guevarra also said the Commission on Human Rights (CHR) will be engaged in this matter as the need arises, especially when it comes to coordinating with the victims’ families and their witnesses.

The DOJ had reviewed a total of 52 drug-related killings from the drug war documents which were turned over by the PNP.

The agency recommended that further investigation and case build-up be done by the PNP and the NBI to determine the possible criminal liability of around 153 police officers involved in the anti-illegal drugs operations.

Gen. Eleazar vowed that the police would extend all the necessary assistance in the NBI’s case build-up, especially the turnover of more documents and ensuring the cooperation of the involved cops.

Guevarra earlier ordered the NBI to to determine the criminal liability of 154 policemen involved in anti-drug operations that led to the deaths of 52 suspects saying that even the PNP Internal Affairs Service has noted that the policemen involved were criminally and administratively liable for their acts.

“As Chief of the Philippine National Police, I cannot allow and I cannot ignore all of these to persist because what is at stake here, more than credibility that we want to protect, is the honor and dignity of the police organization especially in the eyes of the young and future generations of Filipinos,” Gen. Eleazar said in the wake of the DOJ chief’s statement.

“This serves as our motivation here in the PNP to work closely with the Department of Justice to conduct a review of all drug-related operations in the interest of transparency and accountability.

After all, we are bound by the strict ethical rules, legal provisions and high moral standards in everything we do as public servants,” he added.

The Duterte administration’s war on drugs since July 1, 2016 has already resulted in the conduct of nearly 214,000 anti-narcotics operations to date which led in the arrest of over 307,000 suspects including 1,008 government employees broken down into 390 elected officials, 120 uniformed personnel and 498 government employees; the seizure of over P65 billion worth of shabu and other prohibited drugs and the dismantling of 893 secret drug dens and shabu laboratories.

However, over a dozen policemen have also been killed while going after armed drug traffickers.

Last September 28 alone, Police Staff Sergeant Karl Marty Manzanilla of the Dasmariñas City Police Station in Cavite was killed while a colleague, Patrolman Ariel Maribojo was wounded after being shot by a heavily-armed suspect during a botched buy-bust operation.

Gen. Eleazar has ordered the Police Regional Office 4-A (PRO 4-A) headed by Brigadier Gen. Eliseo DC Cruz to use all their available resources to arrest three suspects led by one Marlon Pacia who managed to flee after firing at the lawmen.

Four other cohorts of the three have been arrested and are now facing criminal charges.

Gen. Eleazar said the incident only proved that drug suspects would really fight back against authorities and kill them just to evade arrest, contrary to various claims that they are among the victims of the war against illegal drugs.

Fully supporting the Philippine Drug Enforcement Agency (PDEA) headed by Director General Wilkins M. Villanueva in the fight against illegal drug trafficking and abuse, the PNP has been hit by criticisms left and right regarding abuses being committed by its men in the conduct of anti-drug operations since 2016.

Gen. Eleazar said that as part of their commitment to fully cooperate with the DOJ, he has ordered the creation of a top-level PNP Coordinating Group that will work closely with the NBI in the conduct of case build-up and filing of criminal complaints based on the evidence that would be gathered.

The composition of the PNP Coordinating Team shall be announced in the soonest possible time, he said.

“Likewise, more cases will be subjected to review as agreed by the DOJ and the PNP under the guidance of our SILG, Eduardo Año. We assure the Filipino people that your PNP will remain committed in the search for truth in all of these cases and right now, we believe that we are on the right track in pursuing this commitment,” the PNP chief said

They’re off and running

What other bets are promising Mayor Isko has already fulfilled
October 21, 2021 Itchie G. Cabayan
SHOW ALL