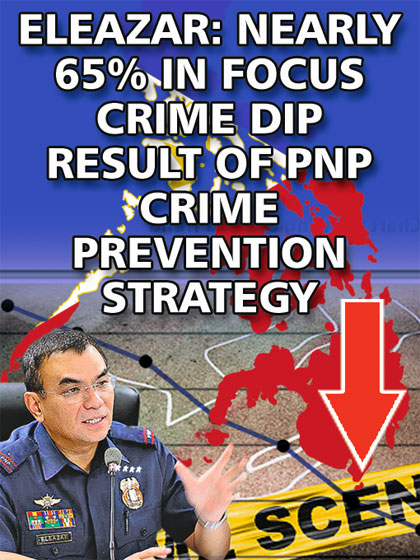 A SIGNIFICANT reduction in the so-called Eight Focus Crimes in the country from July 2010 to June this year is a clear indication that the Philippine National Police’s (PNP) strategies in preventing and fighting criminality are working like a well-oiled machine, PNP chief, General Guillermo Lorenzo T. Eleazar told the Journal Group.

The top cop said that apart from the major crime reduction during the past five years of the Duterte administration, they also have recorded a significant increase in their Crime Solution Efficiency (CSE) and Crime Clearance Efficiency.

The number of crimes against properties also declined by as much as 65.55 percent as data disclosed that during the previous administration, crime against property went as high as 655,345 compared to the records under President Duterte’s administration wherein the PNP tallied only a total of 225,752 property-related cases.

Official PNP records showed that from January to June 2020, there were a total of 21,716 Eight Focus Crimes recorded nationwide although the number from January to June this year was pegged at only 18,113 which is 3,603 incidents less compared to last year’s figures or a 16.59 percent reduction.

The Average Monthly Index Crime Rate during the 2020 period was 19.14 compared to the average 18.04 AMICR this year or a 5.75 percent reduction.

Gen. Eleazar credited the significant reduction in major crimes nationwide to the PNP’s relentless effort to maintain peace and order amid the pandemic brought about by the COVID-19 virus and in providing full assistance to the government in delivering much-needed services by the public.

The following are the comparative figures in the 1st semester of 2020 and 2021:

The PNP noted a very significant reduction in cases of physical injuries, homicide, rape, robbery and motor vehicle theft during the 1st six months of the year.

The reduction in the eight focus crimes, according to Gen. Eleazar were sustained with the intensified police presence across the country and focused law enforcement operations and other police interventions that led to the arrest of lawless elements that prevented them from committing more crimes while in the lam.

The Total Crime Incidents in Luzon and Visayas also went down by 6.37 percent and 10.97 percent respectively although there was a 22.71 percent increase noted in Mindanao.

However, the POI went up in Mindanao by 28.61 percent.