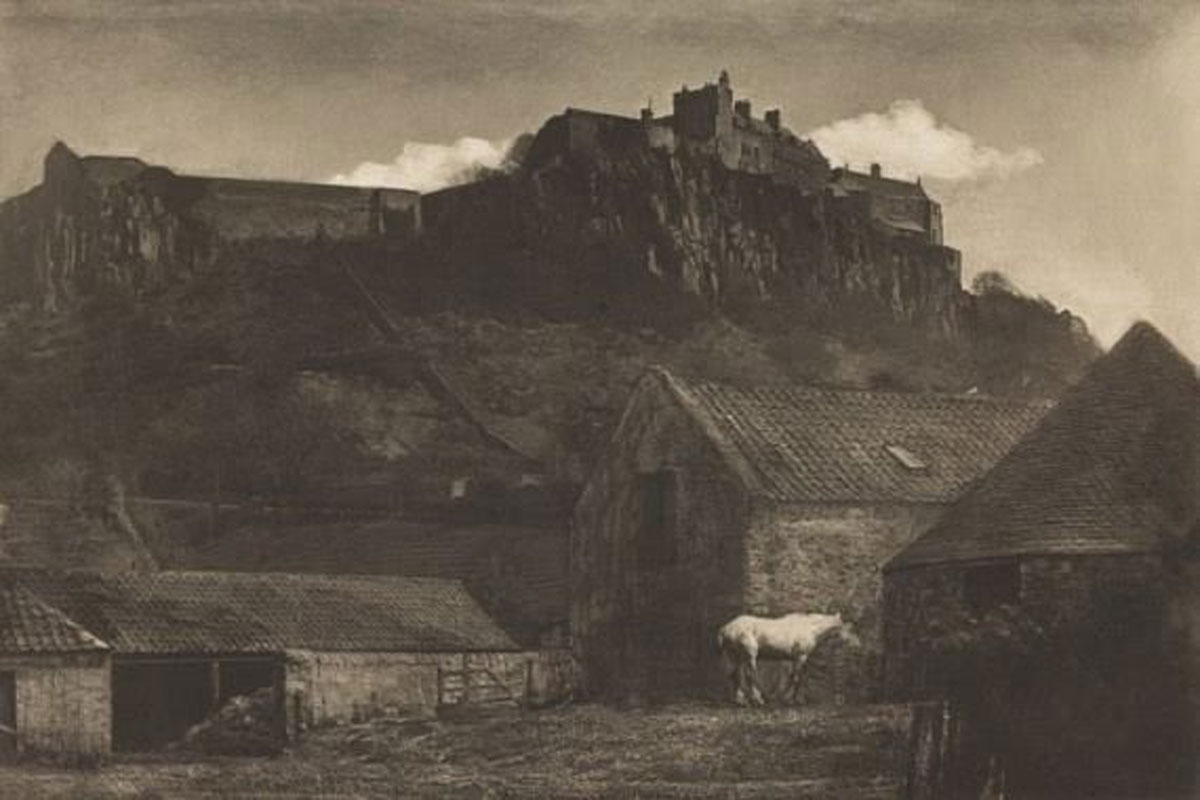 In modern times, there is not much left of the once glorious Annan Castle. Located on the banks of the River Annan, in Annan, Scotland, the castle is now just an eroded husk of ancient red-sandstone, little more than a handful of ruins, but in a former life it was once a very important place. The castle was originally built in the early 12th century by King Willian The Lion to serve as a stronghold for the de Brus family, Lords of Annandale, chosen for its strategic position on the river guard the crossing from Galloway, which at the time was an independent region from the Kingdom of Scotland. It also served to guard the route north to Lothian and Strathclyde. The castle long served as the home of Robert de Brus, also commonly called “The Competitor,” 6th Lord of Annandale, father to the future King of Scotland Robert the Bruce and grandfather of Robert I, The Bruce. It is with Robert de Brus that we get to talk of curses and vampires at the castle.

The legend of the mysterious curse is said to have begun with a visitor to the castle by Saint Malachy, Archbishop of Armagh, in 1138. The reason for his visit was to make a request of Robert and to ask him for his mercy on a wronged man. According to the tale, there was a robber who was to be hanged, but Malachy believed he was actually innocent. Since Robert acted as the chief lawman of the region, Malachy had come to ask that he be pardoned and spared from execution. There seem to be several versions of what happened next. In one, Robert straight out refuses and has the man hanged despite pleas from Malachy. In another version he agrees, but later Malachy sees the condemned man hung on the gallows, the promise broken. In either case, the man is hanged and this really makes Malachy mad. He decides to lay down God’s wrath on not only Robert, but the entire de Brus family and the castle itself. In later years Robert de Brus would blame the curse on nearly every calamity that faced them, including the rising level of the river flooding the river and threatening the castle, fires, sickness, and when Robert eventually contracted leprosy he blamed this, too, on the ominous curse. Yet the worst effect the curse started with a stranger and a mysterious plague. 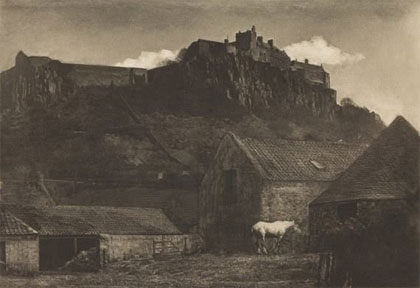 It starts with the arrival of a mysterious stranger from York, who wandered in and was given lodgings by the de Brus family at their castle. The rumors at the time were that this man was on the run for some crimes or atrocities he had committed, but as to what these were, no one knew. He is said to have married a wife, but soon became convinced that she was cheating on him, leading to him seeking to catch her in the act. William of Newburgh would write of this man and his woes:

A certain man of evil conduct flying, through fear of his enemies or the law, out of the province of York, to the lord of the before-named castle, took up his abode there, and having cast upon a service befitting his humor, labored hard to increase rather than correct his own evil propensities. He married a wife, to his own ruin indeed, as it afterwards appeared; for, hearing certain rumors respecting her, he was vexed with the spirit of Jealousy. Anxious to ascertain the truth of these reports, he pretended to be going on a journey from which he would not return for some days; but coming back in the evening, he was privily introduced into his bedroom by a maid-servant, who was in the secret, and lay hidden on a beam overhanging, his wife’s chamber, that he might prove with his own eyes if anything were done to the dishonor of his marriage-bed. Thereupon beholding his wife in the act of fornication with a young man of the neighborhood, and in his indignation forgetful of his purpose, he fell, and was dashed heavily to the ground, near where they were lying.

The fall did not kill the man, and as the other man fled, the wife helped her wounded husband. Shortly after this, he fell down with a mysterious illness, and died in his sleep some nights later. After this, many other people in the area too began to fall ill, until it was spreading like a plague through the castle and surrounding towns. In addition to this, it was reported that the man who had been staying at the castle was lurking around the shadows at night, pale and gaunt, despite the fact that he had died and been buried in the cemetery. In addition to seemingly rising from the grave, he was often seen in the presence of a pack of vicious barking dogs who followed him around everywhere, and it was also said that he would attack people and that wherever he went the mysterious plague followed. The belief at the time was that he rose from his grave at night, animated by some sinister energy, only to return to it after his night of malevolence had come to an end and the sun rose, bringing pestilence to wherever he had been. Other rumors were that the man was feeding off the blood of those he attacked, and that these people would soon succumb to the disease as well. The people of the region became terrified of this apparent revenant, and William of Newburgh would say of this:

A Christian burial, indeed, he received, though unworthy of it; but it did not much benefit him: for issuing, by the handiwork of Satan, from his grave at night-time, and pursued by a pack of dogs with horrible barkings, he wandered through the courts and around the houses while all men made fast their doors, and did not dare to go abroad on any errand whatever from the beginning of the night until the sunrise, for fear of meeting and being beaten black and blue by this vagrant monster. But those precautions were of no avail; for the atmosphere, poisoned by the vagaries of this foul carcass, filled every house with disease and death by its pestiferous breath. Already did the town, which but a short time ago was populous, appear almost deserted; while those of its inhabitants who had escaped destruction migrated to other parts of the country, lest they too should die. 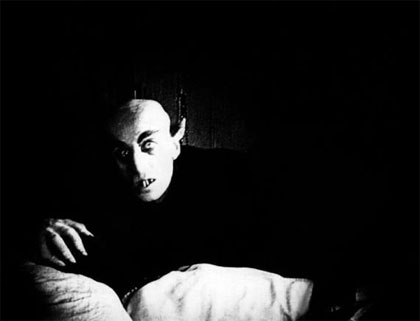 Two men who lost their father to the plague brought by this undead creature decided that it was time to fight back and destroy the evil, and they went about hunting down the location of the grave under the protection of sunlight, armed with shovels to dig and torches to kill it with righteous fire. They apparently found the corpse soon enough, and when they did they were shocked to see that the man looked to be engorged with blood. This frightened them, but they were driven by the desire to avenge their dead father, and so commenced their assault. The writings of William of Newburgh describe what followed:

Thereupon snatching up a spade of but indifferent sharpness of edge, and hastening to the cemetery, they began to dig; and whilst they were thinking that they would have to dig to a greater depth, they suddenly, before much of the earth had been removed, laid bare the corpse, swollen to an enormous corpulence, with its countenance beyond measure turgid and suffused with blood; while the napkin in which it had been wrapped appeared nearly torn to pieces. The young men, however, spurred on by wrath, feared not, and inflicted a wound upon the senseless carcass, out of which incontinently flowed such a stream of blood, that it might have been taken for a leech filled with the blood of many persons. Then, dragging it beyond the village, they speedily constructed a funeral pile; and upon one of them saying that the pestilential body would not burn unless its heart were torn out, the other laid open its side by repeated blows of the blunted spade, and, thrusting in his hand, dragged out the accursed heart. This being torn piecemeal, and the body now consigned to the flames, it was announced to the guests what was going on, who, running thither, enabled themselves to testify henceforth to the circumstances. When that infernal hell-hound had thus been destroyed, the pestilence which was rife among the people ceased, as if the air, which had been corrupted by the contagious motions of the dreadful corpse, were already purified by the fire which had consumed it.

Although the creature described is never specifically referred to as a “vampire,” it is obviously such a tale, and it leaves one to wonder if there was any truth to this story at all. Is there any historical reality to this tale, or is it merely a legend, along with the supposed curse on the castle? Whether Annan Castle was cursed and menaced by a vampire or not, the castle was mysteriously abandoned for reasons still debated and not completely understood. Some think it was the rising of the river, whiles others believe that the de Brus family simply moved to a new castle they had built at Lochmaben a short distance to the north, but still others point to the old stories and suggest it may have been due to the curse and the vampire. Considering the story is so old and is almost exclusively known from William of Newburgh’s story, which in fact he got second hand from a monk who had been there, it is impossible to tell just how much the story is fact or fiction. Whatever the case may be, it is a rather odd and spooky tale surrounding this undeniably creepy place.