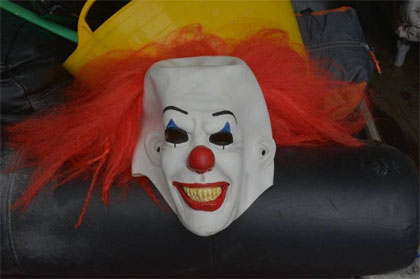 Authorities in England are sounding the alarm about a particularly unsettling series of creepy clown sightings wherein the haunting harlequins are said to have offered children a ride in their white van. According to a local media report, the nightmare-inducing encounters occurred last week in the community of Wolstanton. On multiple occasions, youngsters walking to school say that a mysterious white van stopped along their route and sent chills down their spine when it became apparent that the driver of the vehicle was, in fact, a clown. Making the experiences all the more eerie, if that’s even possible, the harlequin behind the wheel proceeded to ask the children if they needed a ride, which they wisely refused.

In a letter to parents cautioning them about the clowns roaming their community, school administrators noted that the youngsters were understandably “upset and frightened” by the incidents. It is uncertain how many individuals may be behind the strange reign of terror as witness reports seem to suggest that there could have been multiple people in the van, which is in keeping with what one might expect from a proverbial clown car. Cops say that they’ll be adding extra patrols to the area and have asked residents to keep an eye out for the suspicious van in the hopes that someone might be able to spot a license plate on the vehicle.