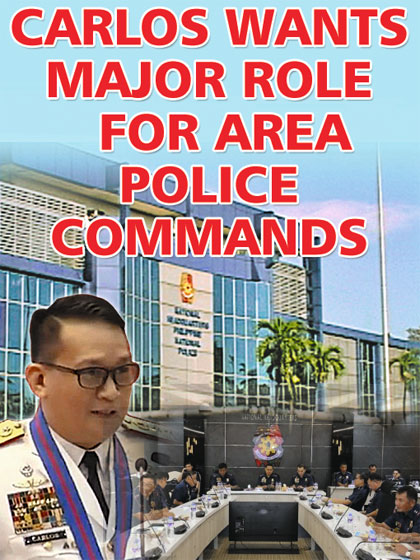 PHILIPPINE National Police (PNP)chief, General Dionardo B. Carlos yesterday stressed the need to equip their five Area Police Commands or the former PNP Directorates for Integrated Police Operations with more power and authority to fight terror and criminality in the country.

As such, the member of Philippine Military Academy (PMA) ‘Maringal’ Class of 1988 said the APCs should be more involved in the police’s campaign against insurgency, terrorism and the dismantling of private armed groups amid their ongoing effort to help ensure a fair, secure and credible May 2022 national and local elections.

Clothing the APCs or DIPOs with more authority was an idea of former PNP chief, Gen. Camilo Pancratius P. Cascolan which Gen. Carlos said he would like to continue.

Gen. Carlos said he wants the continuity of now retired Gen. Cascolan’s move to fully expand the power of the DIPOs which oversees the operations of regional and provincial offices including the investigation of crime and terrorism incidents across the jurisdictions of police regional offices.

Under Cascolan, DIPOs were envisioned to be one of the PNP frontline units in its peace and order functions specifically when it comes to addressing threats posed by the New People’s Army and other lawless elements in far-flung pars of Luzon, Visayas and Mindanao.

The National Police Commission last year signed a resolution approving the upgrading of the rank of the directors of the five PNP-DIPOs which were patterned after the AFP Area Commands.

Right now, its directors are 3-star police generals while their deputies are Major Generals or 2-star rank.

The five DIPO directors with the rank of Lieutenant Generals are among the eight 3-star generals in the PNP. The three others are the members of the PNP Command Group, namely PNP Deputy Chief for Administration, Lt. Gen. Joselito M. Vera Cruz; PNP Deputy Chief for Operations, Lt. Gen. Israel Ephraim T. Dickson; and Lt. Gen. Carlos who used to be the PNP Chief Directorial Staff.

Major Gen. Rhodel O. Sermonia will get his 3rd-star after being named as the new PNP-TCDS or the 4th highest PNP official with the installation of Gen. Carlos as the 27th PNP chief.

The DIPOs were activated to strengthen the coordination and interoperability of the police and the military against communist insurgency, terrorists and other threat groups.

The Napolcom resolution was issued in 2020 amid Gen. Cascolan’s move to fully utilize the five PNP-DIPOs in their fight against insurgency in the countryside in support to the Armed Forces.

The resolution said that DIPOs are mandated to direct and supervise the conduct of inter-regional anti-criminality, counter-terrorism and counter-insurgency operations against lawless elements which transcend regional boundaries and provide a system for the promotion of regional socio-economic development.

With that, Gen. Carlos has ordered his DIPO commanders to continue strengthening coordination and inter-operability with the different AFP operating units and exercise operational supervision over all PNP maneuver forces including the regional offices of the national support units during the conduct of inter-regional and/or joint operations with the military.

Cascolan proposed the upgrading of the rank of the DIPO heads in view of their vital functions and greater responsibilities particularly in consideration of their expanded role in support to Executive Order No. 70 to End Local Communist Armed Conflict or ELCAC.

He also noted that AFP area commanders who are the counterpart of the DIPO heads already carries the rank of Lieutenant General.

Gen. Cascolan had envisioned that the five DIPOs be given more muscle in the anti-insurgency campaign as they will have operational control of regional and provincial police maneuver units in their areas.

The former PNP chief said that under the operational supervision of PNP-DIPOs, police maneuver or the different regional and provincial mobile battalions which are the cutting edge of the PNP when it comes to the conduct of internal security operations will be deployed in the heartland and areas of operation of domestic threat groups.

Created in May 2009, the PNP-DIPOs were given the responsibility to direct the conduct of integrated anti-criminality, internal security and counter-terrorism operations in the clustered areas of the country.

Previously, each DIPO is headed by a two-star general, the deputy has a one-star rank and the executive officer is a colonel. At present, the DIPO Executive Officer has the rank of Brigadier General.

Then PNP chief Jesus A. Verzosa explained that the purpose of the creation of the DIPOs is to synchronize the police and the military operations in the five clustered areas of the country.

During the 2-month tenure of Gen. Cascolan, he ordered the relocation of all five DIPO offices outside Camp Crame.

The transfer of the five DIPOs as well as national operational and administrative support units to other locations outside of Camp Crame was also planned by Cascolan to address the problem of lack of parking spaces in the national headquarters and at the same time minimize the number of people which adds up to security problems during the ‘New Normal’ triggered by the COVID-19 pandemic.