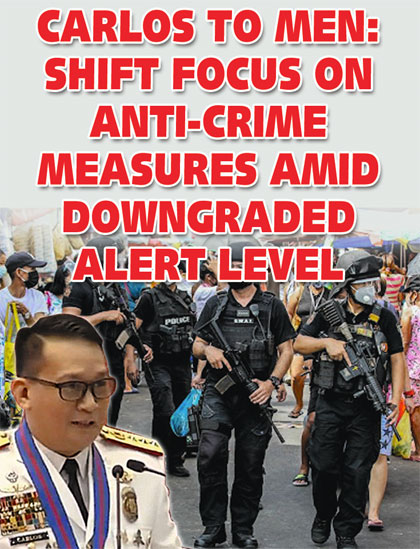 PHILIPPINE National Police (PNP) chief, General Dionardo B. Carlos yesterday ordered all 17 police regional offices to shift their focus on protecting the public against criminal elements expected to take advantage of the Yuletide Season to pounce on their preys amid the downgraded COVID-19 alert in the country.

The top cop also instructed the 17 police regional offices led by the National Capital Region Police Office (NCRPO) to strictly enforce the new Alert Level System designed by the Department of Health (DOH) to help prevent the further transmission of the deadly virus specifically during the forthcoming festivities.

Carlos earlier ordered the intensified implementation of their Enhanced Managing Police Operations against criminality and their Double Barrel Finale ‘Version 2021’ against illegal drugs.

“We will improve these programs as necessary and introduce further reforms as needed as we strive to make more potent these tools against crime and illegal drugs,” he said.

Maximum police visibility is needed as the government has allowed the opening of more business establishments and other shops in highly-urbanized cities and other parts of the country to help boost the economy.

With the new rules in effect, Carlos said all police commanders should always be ready to ‘predict and plan ahead’ to keep peace and order in their areas amid the new normal.

Quarantine Control Points being manned by uniformed officers in coordination with local government units will remain to be an integral part of PNP border security as part of their target-hardening measures and to contain the movement of unauthorized people.

The PNP leadership has instructed all provincial and city police officials to be familiar with the government guidelines for each Alert Level under the system to ensure their proper implementation in communities .

NCRPO director, Major Gen. Vicente D. Danao Jr. said they have stepped up their conduct of foot and mobile patrols and deployment of plainclothes officers on the streets specifically in places of convergence to protect the public from lawless elements.

Carlos however reminded all his men to properly implement health protocols so that the Alert Level System could really be effective in curbing the further increase of COVID-19 cases like in Metro Manila and the rest of the country.

He added that he also expects his commanders to go all-out in following their best practices at the height of the pandemic restrictions which led to a much lower crime volume amid the restricted movement of people.

All focused crimes went down as movement of criminal elements especially motorcycle-riding thieves in Metro Manila and other urban parts of the country were fully checked during the enhanced community quarantine enforcement.

At the same time, he called on the public to continue observing minimum public health standards specially the mandatory wearing of face masks and face shields in enclosed areas and the full observance of physical distancing so that the decrease in the number of COVID-19 cases would continue.

He also asked the citizenry to maintain their vigilance to help prevent criminality especially now that more people are expected to go out in shopping malls, markets and ‘tiyangges’ to buy gifts and other Christmas goods.

Aside from the easing of protocols, the IATF also approved the recommendation of the sub-Technical Working Group on Data Analytics to base the alert level assignments on data nearest to the enforcement date.