Carlos to loose firearm holders: We’ll get you soon 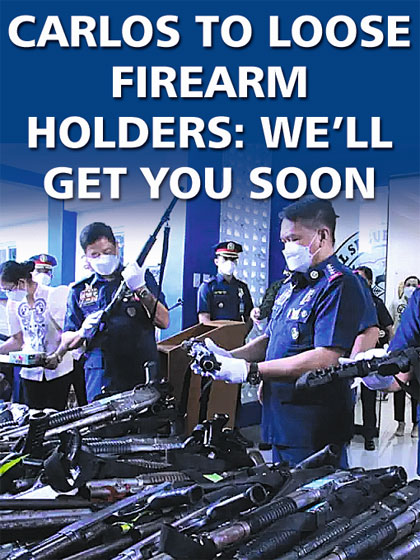 PHILIPPINE National Police (PNP) chief, General Dionardo B. Carlos yesterday appealed to all holders of loose firearms in the country to surrender their weapons to the police or face the full force of the law as the PNP and the Armed Forces continue to strictly implement a nationwide gun ban to ensure peaceful May 9 elections.

In 2021, the PNP’s relentless effort to account for loose firearms nationwide resulted in the confiscation, recovery, and surrender of 25,141 small arms and light weapons.

The operations led to the arrest of 10,503 suspects and the filing of 4,875 cases for violation of Republic Act 10591 or the Comprehensive Firearms and Ammunition Regulations Act of 2013 against the suspects.

Since the gun ban started last January 9, police have arrested nearly 700 offenders, more than 95 percent of them civilians who yielded unlicensed guns and other deadly weapons.

The gun ban enforcement has also resulted in the confiscation of nearly 600 firearms , around 300 deadly weapons, more than 200 bladed weapons, 52 explosives and nearly 4,000 rounds of assorted live ammunition.

The PRO4-B director said the January 21-30 operations in the region were in line with their all-out effort to account for weapons that could be used as an ‘instrument of violence’ during the May polls.

He said that 72 of the firearms were deposited for safekeeping by their owners who are yet to renew their firearm registration papers while 60 were turned voluntarily turned over to the local police by their owners during the conduct of PNP Oplan: Katok in the region.

Brig. Gen. Hernia said that last month, they conducted a total of 8,201 anti-criminality operations including the service of search warrants for violation of Republic Act 10591 or the Comprehensive Firearms and Ammunition Regulations Act of 2013 and other police responses.

The operations led to the recovery of 728 loose firearms, 100 explosives, 798 assorted live ammunition and 422 unregistered guns.

Brig. Gen. Hernia gave credit to PRO4-B Deputy Regional Director for Operations, Colonel Gil Francis G. Tria for fully supervising their Enhanced Management Police Operations and driving their unit commanders to perform well in their campaign against illegal guns in the region which is comprised of the provinces of Mindoro Oriental, Mindoro Occidental, Marinduque, Romblon and Palawan,home to Puerto Princesa City.

The PNP chief ordered the stepped up enforcement of the PNP: Oplan Katok aimed at accounting for guns that could be used in the commission of crimes especially during the May elections.

Under PNP Oplan: Katok, uniformed police officers knock on the doors of gun-holders with expired firearm licenses and request them to renew their permits within a given period under the pain of being subjected to lawful actions in the event they fail to act on the policemen’s appeal.

The PNP leadership earlier maintained that their ongoing Oplan: Katok is sparing no one.

During Oplan :Katok, a gun holder with expired license is advised to apply for renewal. Should the owner decide not to renew the firearm license and just surrender it, an acknowledgement receipt shall be provided by the inspector to be signed by the firearm holder. For lost firearms, the gun holder should execute an affidavit of loss stating the reason why it was lost supported by a police investigation report.

For a sold firearm, the vendee is required to facilitate the transfer of ownership of the firearm at the Firearms and Explosives Office (FEO). A mere deed of sale does not constitute a complete transaction.

In case of death of the licensed firearm holder, family members or relatives should report it to the FEO for the subsequent revocation of the license and they will be advised on the process for the transfer of ownership of the firearm.

Under the law, particularly Republic Act 10591 or the Comprehensive Law on Firearms and Ammunition, the PNP chief, through the FEO, shall issue licenses to qualified individuals and cause the registration of firearms.

Only small arms may be registered by licensed citizens or licensed juridical entities for ownership, possession and concealed carry. A light weapon shall be lawfully acquired or possessed exclusively by the AFP, PNP and other law enforcement agencies authorized by the President in the performance of their duties

Those who can’t immediately renew their firearm licenses for various reasons are requested to temporarily turn over their guns to the nearest police station or the PNP -FEO for temporary safekeeping until they have renewed their papers.

The deposited firearms are issued the necessary safekeeping papers and inventory receipt before being kept in a police storage facility for immediate return to their owners as soon as he/she presents the renewed gun papers.

No unity in debates