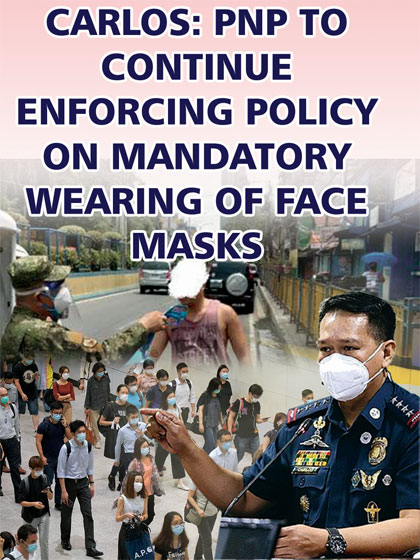 POLICE nationwide will continue enforcing government rules on the mandatory wearing of face masks in public to help prevent another mass spread of the deadly COVID-19 virus during, before and after the election period, Philippine National Police (PNP) chief, General Dionardo B. Carlos said yesterday.

The top cop said he has instructed his men to fully enforce the policy on the mandatory wearing of face masks during the remaining days of the 2022 election campaign period. At present, police are accosting persons not wearing face masks on the streets and are telling them to comply with the order. Some violators are also being ordered to pay fines imposed by local government units.

“The National COVID-19 Task Force is calling for the mandatory wearing of face masks during campaign rallies, thus we are appealing to rally organizers to make sure that everybody, the candidates, the organizers, the crowd and other participants to wear face masks,” the top cop said.

Gen. Carlos said they are particularly recommending that the mandatory wearing of face masks be enforced during the start of the local campaign period on March 25.

“We will use the law to protect persons, their activities and the organizers,” he said amid observations that some minimum health safety measures such as wearing of face masks and physical distancing are being violated in past major political rallies.

However, he told the Journal Group that they will be very particular when it comes to the wearing of face masks. He explained that since if they would be very strict in enforcing physical distancing in campaign rallies, they would rather recommend ‘virtual rallies’ in such case.

The PNP chief issued the statement amid calls for the continued use of well-fitted face masks especially in public areas and enclosed spaces amid the new normal.

Department of Interior and Local Government (DILG) Secretary Eduardo M. Año earlier said they are no plans yet, or even a discussion among government officials on whether to drop the mandatory use of face masks even as the government plans the transition to the “new normal” during the COVID-19 pandemic.

The DILG chief said the government is currently crafting guidelines for the “new normal” during the pandemic, which would be implemented if the entire country is placed under the least restrictive Alert Level 1.

“It is not in our discussion since masking is very essential until we finally declare that Covid 19 is totally eliminated. Masking is our final defense. It would be the last thing that we will remove,” Galvez had previously said.

On the other hand, Department of Health Secretary Francisco Duque said the idea of no longer requiring the use of face masks is “still iffy’ and that they are still discussing plans and strategies under the new normal.

Duque also said Filipinos should continue to wear face masks as the alert level 1 status in many areas of the country would likely remain until the end of President Rodrigo Duterte’s term.

The DOH chief said the proposal to ease the requirement for people to wear masks outside their homes during alert level 1, though being studied, was still premature.

“We ask for some patience, we’re studying it. And when the time comes that we have to remove the mask, why not? But now, it’s still premature, too early. So … [we’ll be under] alert level 1 for now and likely until the end of the term of President Duterte,” he said.

Sec. Duque said the Philippines should learn from the experience of various countries, especially in Europe where mask mandates were “hurriedly” removed.

“Now, you see [COVID-19] cases are spreading again in Austria, Denmark, Germany, and France. Do we want to be like them? We don’t. So let’s not rush, let us be prudent, and let us be guided by our data and science through our expert panels,” he said.