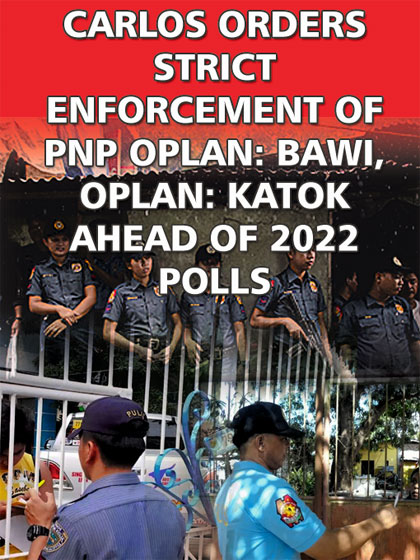 PHILIPPINE National Police (PNP) chief, General Dionardo B. Carlos yesterday ordered the strict nationwide enforcement of PNP Oplan: Katok and Oplan: Bawi aimed at accounting for guns that could be used in the commission of crimes especially during the forthcoming May 22 national and local elections.

Under the PNP Oplan: Katok, uniformed police officers knock on the doors of gun-holders with expired firearm licenses and request them to renew their permits within a given period under the pain of being subjected to lawful actions in the event they fail to act on the policemen’s appeal.

On the other hand, PNP Oplan: Bawi is aimed at recovering firearms issued to members of the force who have been dismissed or have gone AWOL after being investigated for grave misconducts and other irregularities amid the possibility they could still use their PNP-issued weapons to break the law.

“Thank you for doing your job well. The speedy recovery of the firearms is a testament of your dedication to your work,” the top cop said while adding that the continuing effort by the NCRPO to account for PNP-issued firearms which have not been surrendered by already dismissed cops is a testament to their serious effort to pursue their internal cleansing efforts.

Since last year, the NCRPO has already recovered over a dozen PNP-issued firearms still being kept by dismissed or AWOL police personnel.

Danao said that on Wednesday last week, his men ecovered four more firearms issued to dismissed policemen, one of them the pistol issued to Senior Master Sergeant Jonel Nuezca, the cop who was dismissed from the force and convicted by the court for two counts of murder last August 26.

Nuezca was the policeman caught on video shooting a woman and her son in Paniqui, Tarlac last December following an argument. He escaped with his young daughter but later surrendered to the police and was put behind bars until he was fired from the force for grave misconduct and later sentenced to life imprisonment after being found guilty beyond reasonable doubt by the court.

The NCRPO found out that Nuezca’s firearm was not presented as evidence, hence, it does not fall under the jurisdiction of the court.

Danao said the NCRPO Regional Task Group’s Oplan: Bawi team coordinated with the Paniqui Municipal Police Station and the Tarlac City Forensic Unit for the recovery of the weapon.

He added that three more PNP-issued firearms were also recovered by his men.

One of them is a 9mm Beretta semi-automatic pistol issued to a former patrolman who was dismissed from the force after going on AWOL status when he got involved in a robbery with frustrated homicide case in Cavite.

The two others are a Thompson cal. .45 pistol and another 9mm Beretta pistol which were issued to two already dismissed police personnel.

The NCRPO chief said that the 9mm pistol issued to a dismissed patrolman was initially submitted to the PNP Crime Laboratory for ballistics examination on May 2, 2017. He added that after a Parañaque City Regional Trial Court decided on the case, they requested for the release of the firearm.

Danao said their intensified operation to recover PNP-issued firearms from erring police personnel is in line with their Oplan: Bawi which was reiterated by the PNP chief thru a memorandum issued by the PNP Directorate for Logistics.

The PNP leadership in 2020 ordered the accounting of thousands of unregistered firearms surrendered to the PNP in the aftermath of an incident in Cebu City where a local policeman was arrested for reportedly stealing 12 unlicensed firearms stored for safekeeping.

The stolen firearms belonged to several local residents who deposited them with the local police while processing the renewal of their registration papers with the PNP Firearms and Explosives Office.

The PNP leadership earlier maintained that their ongoing Oplan: Katok is sparing no one as part of its program to account for loose firearms which can be used to commit violence in the streets.

During Oplan Katok, a gun holder with expired license is advised to apply for renewal. Should the owner decide not to renew the firearm license and just surrender the firearm, an acknowledgement receipt shall be provided by the inspector to be signed by the firearm holder. For lost firearms, the gun holder should execute an affidavit of loss stating the reason why it was lost and should be supported by a police investigation report.

Likewise, for a sold firearm, the vendee is required to facilitate the transfer of ownership of the firearm at the Firearms and Explosives Office (FEO). A mere deed of sale does not constitute a complete transaction.

In case of death of the licensed firearm holder, family members or relatives should report it to the FEO for the subsequent revocation of the license and will be advised on the process for the transfer of ownership of the firearm.

Under the law, particularly Republic Act 10591 or the Comprehensive Law on Firearms and Ammunition, the PNP chief, through the FEO, shall issue licenses to qualified individuals and cause the registration of firearms.

Only small arms may be registered by licensed citizens or licensed juridical entities for ownership, possession and concealed carry. A light weapon shall be lawfully acquired or possessed exclusively by the AFP, the PNP and other law enforcement agencies authorized by the President in the performance of their duties

Those who cannot immediately renew their firearm licenses for various reasons are requested to temporarily turnover their guns to the nearest police station or the PNP -FEO for temporary safekeeping until they have renewed their papers.

The deposited firearms are issued necessary safekeeping papers and inventory receipt before being kept in a police storage facility for immediate return to their owners as soon as he/she presents the renewed gun papers.