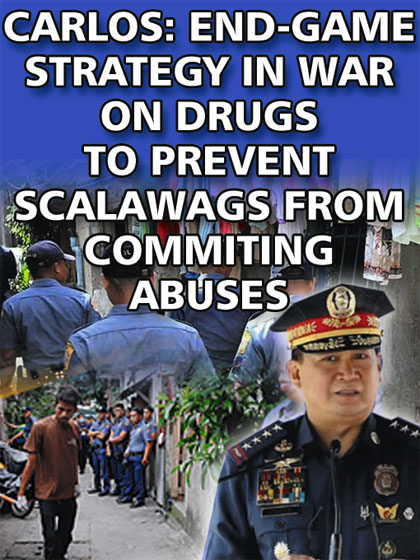 THE Philippine National Police’s (PNP’s) end-game strategy in the war on drugs will not only help treat and reform illegal substance victims but also prevent rogues in uniform from committing abuses, up to the extent of killing innocent people in the guise of performing their duties, General Dionardo B. Carlos said yesterday.

The top cop last week launched their Anti-Illegal Drugs Operations through Reinforcement and Education or ADORE which would primarily focus on addressing addiction to prohibited drugs like shabu and marijuana as a ‘chronic but treatable medical condition.’

“We would like to have the end-game strategy for this administration by completing the double barrel that we started in 2016,” Gen. Carlos said as he referred to ADORE as a multifaceted reinforcement and education-based strategy.

One key component of the program is the extraction of information or intelligence-gathering. The PNP chief said it is very important that before making a drug arrest, law enforcers must have a validated intelligence report on their subjects.

Having an effective and efficient extraction of information will avoid problems or errors in identifying suspects and will prevent a few scalawags from using their authority to kill innocent people.

The PNP chief said they would be focusing particularly on the “rehabilitation, recovery and wellness and reintegration of the more than 1.2 million drug victims that surrendered while going after drug suppliers and traffickers at the same time.

PNP Director for Operations, Major Gen. Val T. de Leon explained that the Infinity symbol of their ADORE strategy represents a line that has no end, boundless and continues indefinitely.

“To our mind, the best strategy to win the seemingly endless drug war is to counter and conquer the same with continuous implementation of anti-illegal drug programs combined with an endless collective effort of law enforcement agencies, countless interventions from the community and stakeholders, and most importantly the undying mission to protect and serve our people,” he said.

Gen. Carlos said Program ADORE will be the final version of the PNP Double Barrel, focusing on 8’Es in the infinity loop namely, engineering the structure, education, extraction of information, enforcement, enactment of laws, environment, economics, and evaluation.

As overseer of the program, the PNP chief said they aim to further enhance and reinforce the guidelines, procedures, and tasks of police offices/units in the conduct of anti-illegal drug operations and activities, in support to the Philippine Anti-Illegal Drugs Strategy (PADS) and the plans and programs of the Dangerous Drugs and the Philippine Drug Enforcement Agency as well as other agencies involved in the government’s vision to achieve drug-free communities.

De Leon said ADORE is anchored on a holistic anti-drug approach to eradicate the proliferation of illegal drugs in the community in close coordination with other law enforcement agencies, national government agencies, non-governmental organizations, local government units and other stakeholders utilizing the 8 Es.

Gen. Carlos formed a technical working group that will study the nationwide implementation of the ADORE thru an eight-track approach.

The 1st track is Engineering the structure which calls for the need to have a well-defined structure where all assigned personnel are qualified to handle their specific role.

The 2nd is the Education component which is needed to deter the increase in the number of drug personalities from manufacturers down to users. The focal point of education is creating awareness, consciousness, and counter-consciousness among the small-time drug pushers and users regarding the danger of illegal drugs.

Gen. Carlos said the education aspect will start within the force. After that, police will go to schools, barangays, the social media and other venues to conduct drug awareness education programs to arrest the prevalence of substance abuse.

The 3rd is the effective gathering of intelligence information followed by the Enforcement of laws specifically Republic Act 9165 or the Comprehensive Dangerous Drugs Act of 2002.

Since the focal point of the program is to reduce drug supply, the enforcement factor will mainly focus on the supply reduction aspect which is targeting and arresting high-value individuals such as drug manufacturers, traffickers, and financiers.

Gen. Carlos said that having an effective enforcement will result in a reduction of supply and increase the cost of illegal drugs. “This will discourage the poor people who are the real victims in the channels of drug distribution,” he said.

Another track is the need to review defective provisions of RA 9165 which has resulted in the dismissal of criminal charges against a number of big-time targets in the past due to technicalities and problems within the law.

Citing the many problems confronting anti-narcotics officers in the streets, the PNP chief their Legal Service, they will be proposing laws as well as amendments to existing laws that are detrimental to the swift conviction of arrested drug personalities.

Another track is the need to have adequate spaces that will accommodate drug victims who have surrendered to authorities. The PNP chief admitted that when the 1st version of Double-Barrel was launched, the large number of illegal drug users and pushers who surrendered to different police stations nationwide caught the PNP leadership by surprise.

“The lack of space to accommodate those who surrendered became a problem. At this point, the 6th track is the environment and the PNP thru the Directorate for Police-Community Relations will facilitate and create networks among the public and private sector to sponsor or establish rehabilitation centers to reform victims of illegal drugs,” he said.

Thru this, police will be able to make a follow-up on all those who underwent rehabilitation to see if they were really rehabilitated or returned to their old ways after enrolling in treatment centers. An effective information validation will also help the police determine if the drug patients deserve to be reintegrated back into the community.

The 7th track is Economics, with the PNP basing its program on the premise that a fully rehabilitated pusher and user with a legal source of money coming from a small business or an employment will not return to drugs.

In this manner, the PNP-DPCR will also be partnering with private and public sector advocates to provide technical education and entrepreneurship opportunities for rehabilitated drug personalities so that they can find employment or establish their own business

The last track is Evaluation which has been described as very important in attaining a successful ADORE program since it would entail an impact assessment.

“The evaluation portion will determine if the program will be a success or a failure or whether or not the main purpose is slowly being accomplished,” Gen. Carlos said.

The program particularly focuses on the need to help the more than 1.2 million drug victims who have surrendered to the force since July 2016 enter the mainstream of the society and be able to find work anew to support their families, the top cop said.

Gen. Carlos earlier underscored the need to further strengthen the BADACs all over the country under the guidance of the Department of Interior and Local Government under Secretary Eduardo M. Año, PNP, PDEA headed by Director General Wilkins M. Villanueva and the DDB chaired by Undersecretary Catalino S. Cuy.