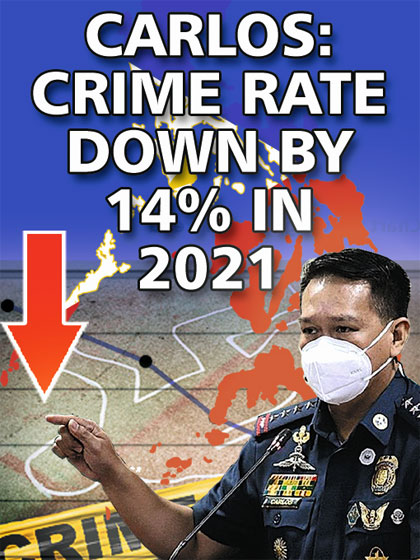 THE Philippine National Police (PNP) recorded a significant 14 percent drop in all major crimes in the country in 2021 consistent with the downtrend in the total crime volume nationwide since the start of the Duterte administration and its war on drugs, PNP chief, General Dionardo B. Carlos said yesterday.

The top cop took note of the prevailing crime trend as recorded in the Crime Environment Report presented by the PNP Directorate for Investigation and Detective Management during their recent command conference at Camp Crame.

The crime trend between 2020-2021 showed the latter part of the six-year continuing downtrend of focus crimes recorded in the Crime Information Reporting and Analysis System (CIRAS) of the PNP, the PNP-DIDM said.

The PNP chief said the 2020-2021 crime trend reduction was the result of their intensified implementation of the PNP Enhanced Managing Police Operations (EMPO) during the onset of the national health emergency in early 2020.

The EMPO’s intensified implementation during the new normal brought about by the COVID-19 pandemic was started by Gen. Archie Francisco F. Gamboa towards the closing months of 2020, the two months under Gen. Camilo Pancratius P. Cascolan, the first five months of 2021 under Gen. Debold M. Sinas and further sustained through 2021 by the force under Gen. Guillermo Lorenzo T. Eleazar who was replaced by Gen. Carlos last November 13.

“What this crime trend indicates is the significant result of the continuity of implementation of the overall strategy and operational thrust on anti-criminality which the PNP is sustaining in the opening weeks of year 2022 under my watch,” Gen. Carlos said.

The National Capital Region Police Office (NCRPO) headed by Major Gen. Vicente D. Danao Jr. also recorded a 17 percent decline in major street crimes in Metro Manila over the past 14 months earning them commendations from Gen. Carlos who also challenged them to continue their anti-criminality gains this year.

“These forms of criminality saw a significant drop because of the partnership that our police personnel built with the communities. The locals learned to be more proactive in reporting potential threats so they can be suppressed even before a crime can happen,” Gen. Carlos said as he called on the Metro Manila police force and the rest of the police forces nationwide to maintain their effective anti-criminality strategies amid the new normal brought about by the COVID-19 pandemic.

Non-index crimes refers to all other illegal acts including violations of special laws or local ordinances.

Maj. Gen. Danao attributed the downtrend to the trust and confidence of the public through their support and cooperation on the programs of the PNP particularly in the fight against all forms of criminality.

“ We do not only give credit to our men for their unwavering efforts but we also appreciate the trust and confidence of the public through their support and cooperation to the programs of the PNP particularly in the fight against all forms of criminality,” the NCRPO chief said as he assured metropolitan residents of their commitment to ‘serve and protect’ 24/7.