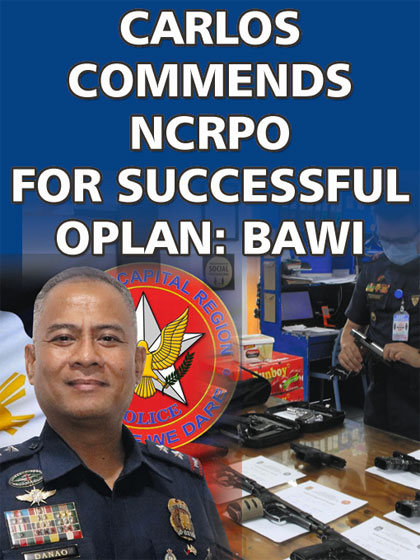 The top cop also called on other police units to launch a more aggressive Oplan: Bawi to ensure that guns issued to dismissed or suspended policemen in their areas are fully accounted for to prevent rogue officers from using them to commit criminal and other abusive acts.

“Thank you for doing your job well. The speedy recovery of the firearms is a testament of your dedication to your work,” Gen. Carlos told the NCRPO chief while adding that the continuing efforts by the NCRPO to account for PNP-issued firearms which have not been surrendered by already dismissed cops is a testament to their serious internal cleansing campaign.

Since last year, the NCRPO has recovered over 360 PNP-issued firearms still being kept by dismissed or AWOL police personnel.

Maj. Gen. Danao said a total of 363 police guns issued to NCRPO personnel who have been dismissed or suspended from the service due to criminal and administrative charges have been accounted for by members of the NCRPO Regional Task Group led by Colonel Dario M. Menor.

Maj. Gen. Danao said the confiscated government properties will be turned over to the NCRPO Regional Supply Accountability Office for proper disposition.

The official said that since February 17 last year, they have recovered 363 firearms from dismissed or suspended policemen, most of them on Absence Without Official Leave (AWOL) status.

The NCRPO chief is fully implementing his ERA program in the force. ERA is an acronym for Example to everyone; R-esponsible to everything and A-ccountable in every action.

Gen. Carlos said the PNP Directorate for Logistics headed by Major Gen. Ronaldo E. Olay is fully supervising their conduct of LOI Bawi activities nationwide in coherence with the National Police Commission Memorandum Circular 94-015 regarding Property Accountability/Responsibility of PNP Supply Accountable Officer and Personnel to ensure that all government issued weapons are properly accounted and recovered.

The PNP chief said the PNP will continue to intensify its measures to confiscate and recover the missing government issued firearms from policemen who fail to surrender their guns after their suspension and dismissal from the service due to administrative and criminal cases.

Among the PNP-issued firearms recovered by the NCRPO was a pistol issued to Senior Master Sergeant Jonel Nuezca who was dismissed from the force and convicted by the court for two counts of murder last August 26.

Nuezca was the policeman caught on video shooting a woman and her son in Paniqui, Tarlac last December following an argument. He escaped with his young daughter but later surrendered to the police and was put into jail until he was fired from the force for grave misconduct and later sentenced to life imprisonment after being found guilty beyond reasonable doubt by the court.

The NCRPO found out that Nuezca’s firearm was not presented as evidence, hence, it does not fall under the jurisdiction of the court. Nueza died reportedly of heart attack inside the New Bilibid Prisons in Muntinlupa City last December.

Another is a 9mm Beretta semi-automatic pistol issued to a former patrolman who was dismissed from the force after going on AWOL status when he got involved in a robbery with frustrated homicide case in Cavite.

The two others are a Thompson cal. .45 pistol and another 9mm Beretta pistol which were issued to two already dismissed police personnel.

The NCRPO chief said the 9mm pistol issued to a dismissed patrolman was initially submitted to the PNP Crime Laboratory for ballistics examination on May 2, 2017. He said that after a Parañaque City Regional Trial Court decided on the case, they requested for the release of the firearm.