Carlos: 2021 a banner year for PNP in war vs drugs, crime, terror 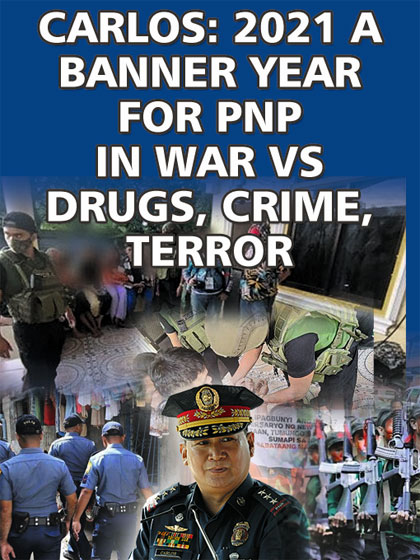 YEAR 2021 was another banner year for the Philippine National Police (PNP) as it made huge accomplishments in its war against illegal drugs, crime, corruption and terrorism amid the new normal brought about by the COVID-19 pandemic, General Dionardo B. Carlos said yesterday.

“We have achieved greater milestones in our operations which focused largely on the campaign against illegal drugs, all other forms of criminality, corruption and terrorism amid the pandemic,” said the top cop.

Citing statistics from the PNP Directorate for Operations, Carlos said that from January to November 2021, police arrested 66,278 illegal drug personalities and seized an estimated P4.653 billion worth of shabu and other prohibited drugs.

He added that overall, they also partnered with the Philippine Drug Enforcement Agency (PDEA) headed by Director General Wilkins M. Villanueva in accounting for more than P8.5 billion worth of the so-called ‘poor man’s cocaine.’

RealNumbersPH Year 5 record showed that from July 1, 2016 to last November, the Duterte government has seized P74.30 billion worth of illegal drugs, P62.35 billion of them shabu smuggled into the country.

The past five years and six months also showed government agents conducting 221,657 anti-narcotics operations which led in the arrest of 319,920 suspects and the death of 6,221 armed suspects following clashes with undercover officers.

Carlos said that among the ‘big fishes’ they neutralized during the period were Chinese nationals Gao Manzhu, Hong Jianshe, Eddie Tan and Xu Youhua. The four were killed in a shootout with PNP and PDEA agents last September 27 in Barangay Libertador in Candelaria, Zambales. Recovered from the suspects were an estimated 500 kilograms of shabu worth P3.4 billion.

Police deployed helicopters and speedboats to assist in the conduct of pursuit operation against the vessel which transported the confiscated illegal drugs to the coastal waters of Zambales.

Carlos said their operations against wanted persons in 2021 also led to the arrest of 95 of the Country’s Top Most Wanted Persons, the killing of four in gunbattles and the surrender of two others.

Among those captured were Monteson Ignacio, Jr., a man wanted for homicide, frustrated murder, murder and attempted carnapping who carried a P550,000 bounty on his head until he was tracked down in his hiding place last June 17.

The PNP chief said that police operatives also arrested 69,077 other wanted persons and caused the surrender of 405 others during the period. A total of 122 wanted armed persons were also slain in encounters with arresting officers, he added.

Carlos said that police also figured in 96 Government-initiated Encounters that resulted in the neutralization of 5,487 personalities identified with terrorist groups. Those operations likewise led in the confiscation of 1,148 small arms and light weapons.

The top cop said that among their major accomplishments in the campaign against known CPP/NPA personalities were the arrest of Ma. Salome Crisostomo-Ujano on November 14, Ma. Loida Magpatoc on September 15 and Gavino Manaig Panganiban alias Nori/Rato/Momoy on August 6.

All three carry a monetary reward of P5.5 million, P5.350 million and P4.5 million respectively prior to their capture.

Carlos said that their unrelenting campaign against loose firearms also led to the confiscation, recovery and surrender of 25,141 small arms and light weapons.

The operations also resulted in the arrest of 10,503 suspects and the filing of 4,875 criminal charges for violation of Republic Act 10591 or the Comprehensive Firearms and Ammunition Regulations Act of 2013 against the arrested felons.

“Aggressive police operations and other police interventions led to the arrest of lawless elements that somehow reduced the number of crimes that they may have committed,” Gen. Carlos said.

Carlos also maintained that they are constantly striving to keep the police force highly capable, effective, and credible in order to serve every Filipino and keep the country peaceful, secure, free of illegal drugs and corruption.