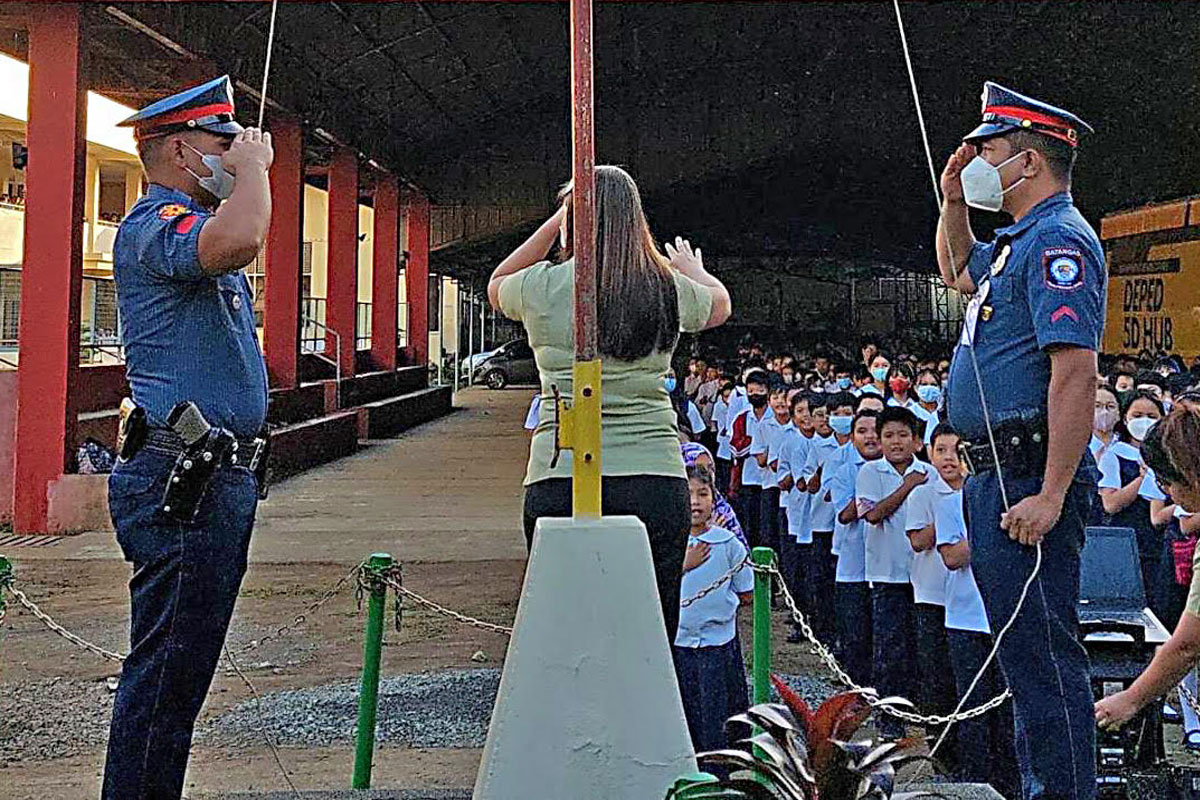 Calabarzon policemen lead a flag-raising ceremony in a public school in Batangas.
Provincial,

THE presence of uniformed officers of the Police Regional Office (PRO) 4-A raising the colors in public schools in the Calabarzon (Cavite, Laguna, Batangas, Rizal, Quezon) region and teaching young students the value of patriotism and love of country has caught the attention of Philippine National Police (PNP) chief, General Rodolfo S. Azurin Jr. who wants the same practice replicated nationwide.

The top cop cited the practice of PRO 4-A headed by Brigadier Gen. Jose Melencio C. Nartatez when he spoke on the importance of the presence of uniformed officers in school vicinities every school day.

It turned out that during the regular Monday flag-raising ceremonies in different public schools in the Calabarzon region, two to three policemen in uniform are out there actually raising the Philippine flag and leading the recitation of the “Panunumpa sa Watawat” to inculcate in the mind of young schoolchildren the value of loyalty and love of the country.

Nartatez said he launched the program when he was designated as PRO 4-A regional director last August 15.

“It’s part of our ‘Oplan: Balik Eskwela’ program to ensure the safety and security of the students, teachers, and the rest of the general public. Every Monday, our policemen go to schools under their area of jurisdiction to raise the flag and recite the ‘Panunumpa sa Watawat,’” said the official.

Every Sunday, uniformed policemen tasked to conduct patrol in and around different churches in the region also hear mass at the same time under their “Pugay Bathala” program.

All these programs are coordinated with the school and church authorities and follow Azurin’s “Kasimbayanan” program, which calls for full police, Church, and community partnership to keep peace and order and spur economic growth in the country.

The Calabarzon policemen’s presence during flag-raising ceremonies in different public schools in the provinces of Cavite, Laguna, Batangas, Rizal, and Quezon has been met with cheers by the public – the policemen’s presence inside schools, although brief, contributes to a “sense of peace” in the area.

By leading the flag-raising rites and the Pledge of Allegiance to the Philippine Flag, the Calabarzon policemen promote, among the “future leaders” of the country, reverence for the flag and a sense of pride and loyalty to the motherland.

On Monday, Azurin instructed all police regional offices to ensure the presence of their uniformed personnel in school vicinities to protect students, teachers, and the rest of the public specifically when there is an ongoing school activity.

The PNP chief issued the order amid a bomb “hoax” that hit the New Era Elementary School in Quezon City (January 24) and temporarily disrupted classes in the area early Monday morning.

After a thorough search, the Q.C. Police District Explosives and Ordnance Disposal Division cleared the school of any explosives.

“We will require our men to be there, especially when there are school activities, hindi lang sa opening ng classes,” Azurin said.

The PNP chief said that he wants the rest of the police regional offices, including the National Capital Region Police Office under Major Gen. Jonnel C. Estomo, to do the same “best practice” in the Calabarzon region.

Azurin assured the public that the New Era Elementary School had been thoroughly inspected by QCPD bomb experts, who found no traces of any explosive materials.

As of press time, QCPD investigators are still looking into the possible cause and source of the bomb scare in the school.