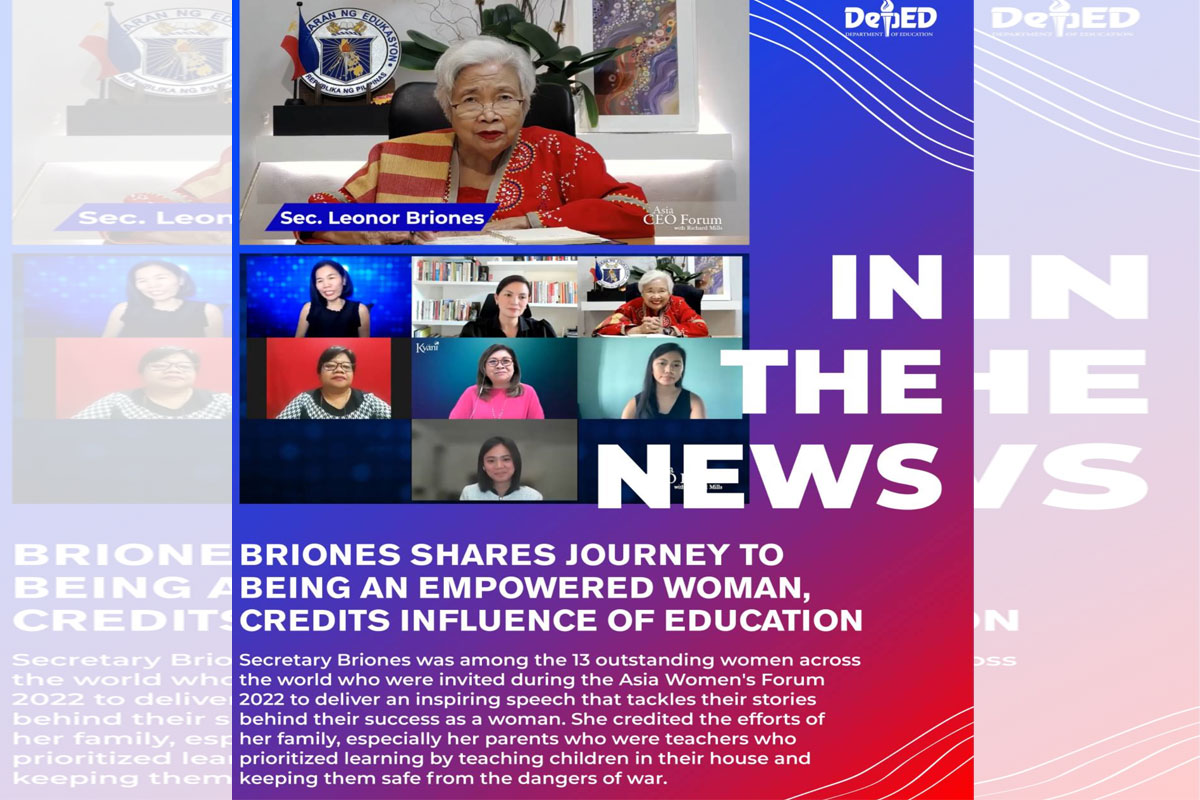 Briones shares journey to being an empowered woman

EDUCATION Secretary Leonor Magtolis Briones shared her journey and educational experiences that helped her be empowered during the Asia Women’s Forum 2022 last Thursday.

“I was fortunate I grew up in a family where there were no distinctions between genders. The driving ambition was to send all of us to school,” Secretary Briones shared in the virtual event hosted by the Asia CEO Forum.

Awarded as Lifetime Contributor for Asia CEO Awards last year, Secretary Briones was among the 13 outstanding women across the world who were invited to deliver an inspiring speech that tackles their stories behind their success as a woman.

Born during the World War II in Guihulngan, Negros Oriental, Briones credited the efforts of her family, especially her parents who were teachers who prioritized learning by teaching children in their house and keeping them safe from the dangers of war.

“My parents were teachers, and what my mother did to distract the children from the noise and the horror of war was to gather them in our house, at the bottom of a gorge, and teach them how to read and write,” Secretary Briones narrated.

“There was no paper so banana leaves with lines were used, and sharpened bamboo sticks like barbecue sticks were used as pencils. That is how I learned how to write and read from worn-out books which my mother had saved from public school,” she added.

During the forum, Secretary Briones recognized women as rulers, warriors, healers, princesses, and leaders, thus, having equal status with men before the conquerors in the Philippines came in. With this, she also challenged the traditional role of women in society.

“What I consider my contribution is my efforts and help in bringing back, resuscitating, encouraging, and inspiring women. We are equal with men, and with the freedom to choose what we want to be,” Secretary Briones noted.

The Asia Women’s Forum 2022 aims to deliver the successes and struggles of the most remarkable women in the world to mentor individuals in their businesses, career, and education.