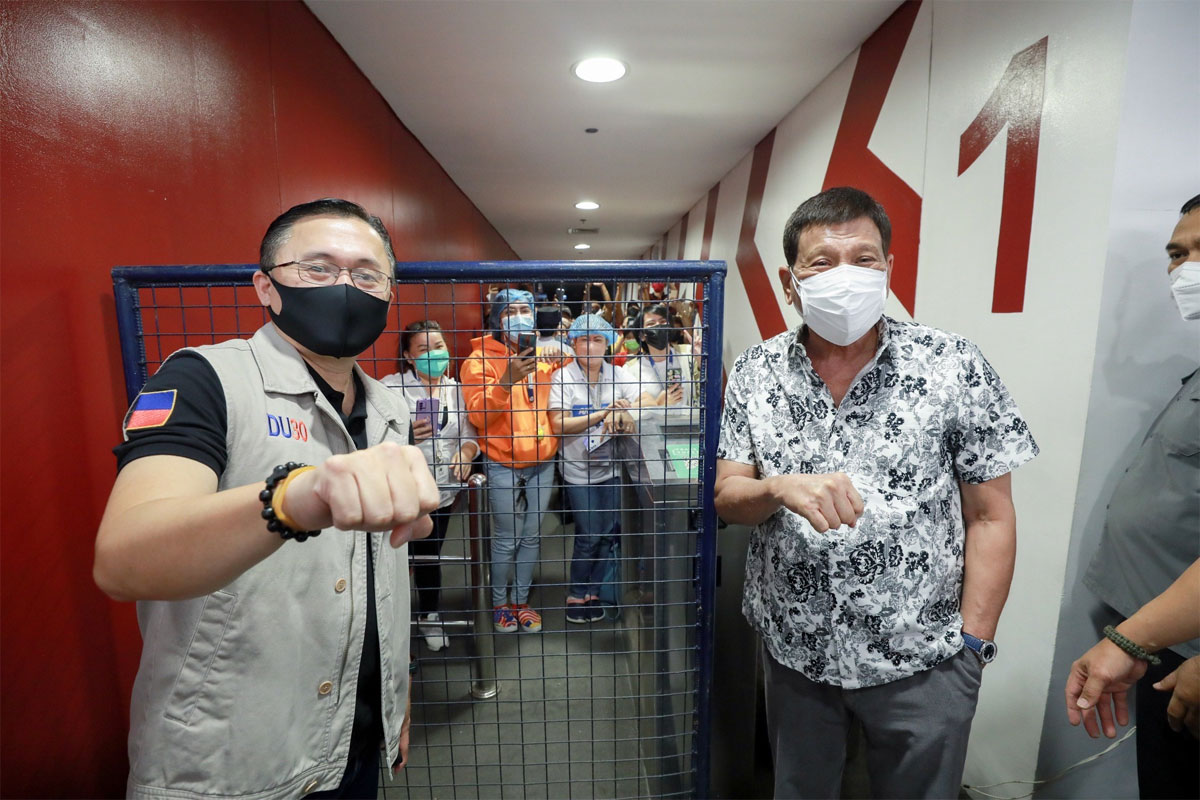 SENATOR Bong Go yesterday announced that he is withdrawing his candidacy for president in May 2022 elections.

This came almost a week after he admitted that he was still waiting for “a sign from God” on whether or not he should push through with his presidential bid.

In a statement, Go explained that his family was not in favor of his presidential run. He also said he does not want to put President Rodrigo Duterte in a difficult situation.

Go reiterated his willingness to “make the supreme sacrifice for the good of our country and for the sake of unity” among their supporters.

“In the past few days, I realized that my heart and my mind are contradicting my actions. Talagang nagre-resist po ang aking katawan, puso, at isipan. Tao lang po ako, nasasaktan at napapagod din [My body, heart and mind are resisting. I am just a human. I get hurt and tired sometimes],” Go said.

“Sa ngayon po, ‘yun ang mga rason ko. That is why I am withdrawing from the race,” he added.

Go, meanwhile, told the presidential aspirants to prioritize the welfare of the country and the interest of the Filipinos.

Before getting elected senator in 2019, Go served as special assistant to Duterte.

CHAIR of the Senate Committee on Health and Demography Christopher “Bong” Go urged Filipinos to be more cautious and to strictly adhere to the health and safety protocols as the nation faces the threat of Omicron COVID-19 variant.

The new Omicron variant was first reported to the World Health Organization from South Africa on November 24. According to WHO, the variant features a considerable number of mutations, making it a variant of concern.

Present vaccines were based on the original Wuhan strain which is considerably different from the Omicron variant, prompting experts to warn that the latter may evade vaccine protection. It remains to be seen by experts if the new variant may be more transmissible and it will be weeks before it can be determined if it causes more severe COVID-19 cases.

In response, the government has halted inbound flights from South Africa, Botswana, Eswatini, Lesotho, Mozambique, Namibia and Zimbabwe until December 15 to prevent the variant from entering the country. The Department of Health stated on Saturday, November 27, that discussions are ongoing about expanding the travel ban.

Go, meanwhile, reiterated the importance of self-discipline and bayanihan in warding off the threats of COVID-19 and its emerging variants.

Go also appealed to those who are not yet inoculated to do so as soon as possible, especially as some studies found that Omicron’s full impact will be felt in countries where fewer are vaccinated.

The three-day nationwide event is running from November 29 to December 1, with the aim of vaccinating an additional nine million individuals to help the country hit its target of achieving population protection or fully vaccinating at least 50% of the population by the end of the year.

“This is our single biggest push to fast track vaccinations … By the end of 2021, we expect to fully vaccinate a total of 54 million Filipinos. We also aim to inoculate 80 percent of the population of minors aged 12 to 17 years and complete the booster shots for those belonging to A1, A2 and A3 sectors,” President Duterte said in a speech.

“This multisectoral event is a resounding expression of our bayanihan spirit which coincides with the nation’s observance of Bonifacio Day on November 30. Indeed, the heroic example of Andres Bonifacio’s courage resonates in each of us as we work together to fast track and intensify our efforts to overcome this pandemic,” he continued.

Sen. Go similarly called on Filipinos, particularly those who are partially vaccinated or unvaccinated, to support the joint initiative between the government and private sector. The event is being implemented in some 8,000 vaccinations sites in all regions, excluding Metro Manila.

Continuing his message, Go expressed his deep gratitude to everyone who worked together to make the event possible. He reminded the participants to adhere to the government-issued protocols to prevent the disease from spreading and starting another spike in the number of COVID-19 cases as the holiday season approaches.