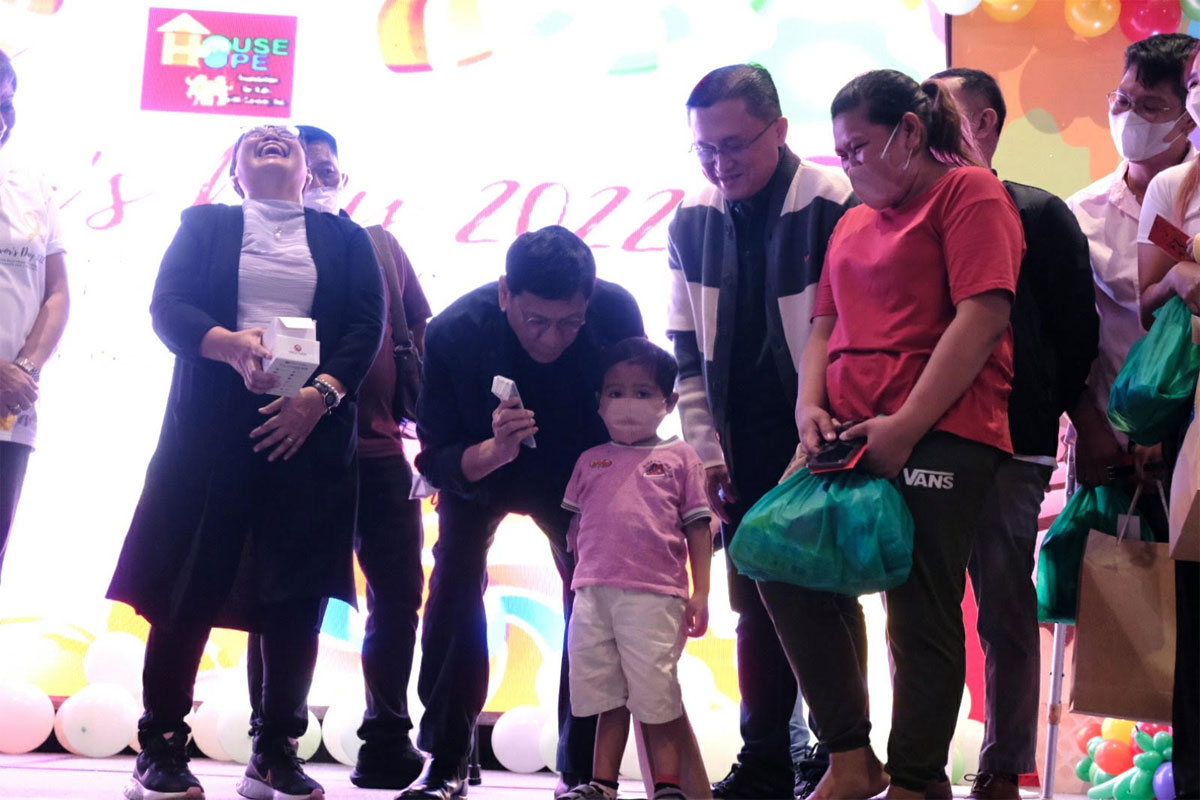 SENATOR and Chair of the Senate Committee on Health and Demography Christopher “Bong” Go and former President Rodrigo Duterte attended the Survivors’ Day celebration at the SMX Convention Center in Davao City to honor the bravery and strength of all cancer patients and survivors.

The event was organized by the House of Hope Foundation for Kids with Cancer.

Go praised the Filipino cancer patients’ resiliency and urged them not to give up hope as the government works to improve support services.

Children with cancer, survivors, and their families look forward to the House of Hope Foundation’s Survivors’ Day every year on December 8 as it is a chance for them to have fun and win prizes at games and get their hands on essentials for a traditional Christmas celebration: gifts and food.

During this year’s event, gifts and assistance were handed out to a total of 350 cancer patients by Duterte and Go.

Go’s sympathy towards cancer patients goes way back when he was still the Special Assistant to the President. In 2018, it can be recalled that Go significantly helped in the treatment of John Paul Culiao, a boy with leukemia. Go then became close to Culiao and the senator even celebrated Culiao’s sixth birthday at Philippine Children’s Medical Center in 2019.

In February this year, Go also reaffirmed his commitment to support more programs and measures to help ease the burden of Filipino cancer patients and their families as the country marked the third year since the National Integrated Cancer Control Act or Republic Act No. 11215 has been signed by Duterte in 2019.

NICCA ensures the provision of quality healthcare services and financial risk protection to cancer patients by adopting an integrated and comprehensive approach to health development, which includes the strengthening of integrative, multidisciplinary, patient- and family-centered cancer control policies, programs, systems, interventions and services at all levels of the existing healthcare delivery system.

Earlier, Go reaffirmed his commitment to support more programs and measures to help ease the burden of Filipino cancer patients and their families as the Department of Health launched the Cancer Assistance Fund (CAF).

Go is one of the lawmakers who actively advocated for the fund to be included in the government’s 2022 budget as well as in the 2023 General Appropriations bill.

“I am always one with you in the fight against this disease. In fact, during the budget deliberations last year, I pushed for an additional budget for the cancer assistance fund to subsidize the cost of cancer treatment, including the needed diagnostics and laboratory tests,” recounted Go.

The DOH stated in a post on Facebook that Special Provision No. 13 “enables CAF to pay for the cost of cancer treatment and its care-related components.” These components include the necessary diagnostics and laboratories for the eight types of cancer that have been identified as priorities.

The health department added that CAF “aims to complement and supplement existing financial support mechanisms for various cancer care and control services that are not yet covered by existing government and private-related efforts.”

Previously, Go also cited the example of the Southern Philippines Medical Center in Davao City which has its own cancer and heart centers. He urged authorities to study the viability of whether it would be best to establish new specialty hospitals in various regions or simply enhance existing public hospitals to be able to have specialty hubs similar to what SPMC has.

Go is a staunch advocate for the improvement of the country’s healthcare system. The senator is the principal author and sponsor of the Malasakit Centers Act of 2019. The Malasakit Center is a one-stop shop which provides particularly poor and indigent patients convenient access to the medical assistance programs of the relevant government agencies. To date, there are 153 Malasakit Centers nationwide.

Go also vowed to continue pushing for the establishment of more Super Health Centers throughout the country in a bid to improve healthcare access among Filipinos, especially in rural areas.