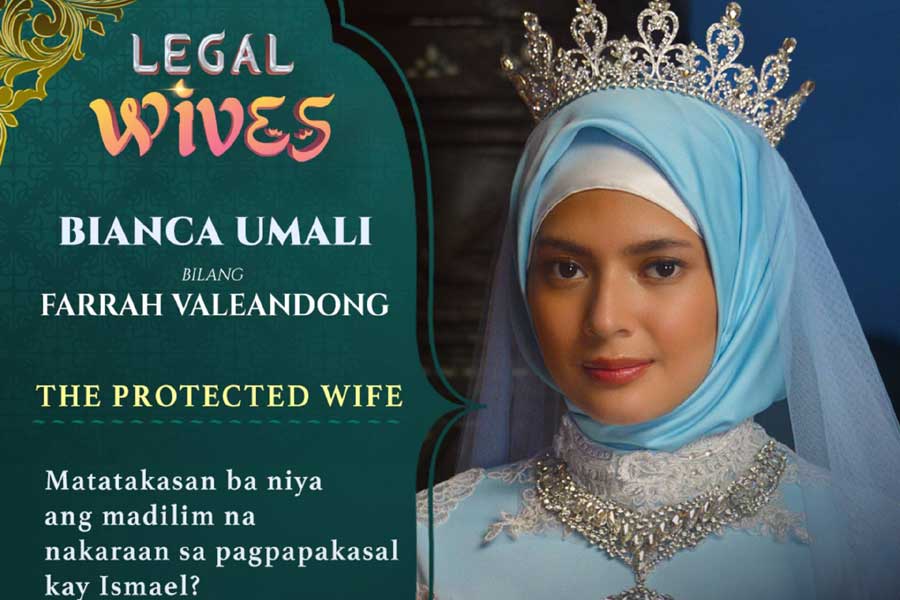 BIANCA Umali says she was pleasantly surprised when she learned she’d be a part of the big-budget GMA drama series, “Legal Wives” that starts airing Monday night.

“They just informed me about it when I renewed my contract with GMA,” she says. “Ako raw ang gaganap na third wife ni Dennis Trillo. Of course, nagulat ako, hindi pa nag-sink agad sa akin. Sabi ko ano pong third wife? But after they explained the show to me, tuwang-tuwa ako. This is my most mature role to date kasi misis ang role ko as one of the wives of Kuya Dennis. I’m so happy that after doing a cultural drama like ‘Sahaya’ na Badjao ako, here I am playing another ethnic character na Maranao naman.”

In “Legal Wives”, she plays Farrah, the daughter of Maricar de Mesa and Bernard Palanca. She got raped then got pregnant and to save her and their family’s honor, Bernard asked Dennis, his best friend, to marry Bianca so she’d become one of his three wives. Can she relate with her character?

“I have no misconceptions about them as I don’t basta judge any culture or religion,” she says. “But I learned a lot about Muslims while taping for this show and taking all the briefings from our Muslim consultants. They’re really a peace-loving people at mataas ang pagpapahalaga nila sa pamilya.”

Would she agree in real life to be just one of the wives of her husband? “Ayoko pong magsalita nang tapos kasi baka, in the future, ma-in love ako sa isang Muslim, hindi natin masasabi. But I guess it will depend on how much you love that person. I know it will be a difficult situation but I think, if my heart would be willing to try it and if it’s really worth it, bakit naman po hindi?”

It’s common knowledge she and Ruru Madrid, who’s now taping his own show, “Lolong”, are playing beautiful music together, but what will be her requirements for any guy who wants to get her heart?

What are the other qualities she is looking for? “Then I want him to be God-fearing, with good well grounded values in life. Preferably, pareho kami ng religion kasi very important ang faith for me at lagi akong nakakapit sa Panginoon to guide me everyday, like my Lola who is very religious. At marami pa pong iba.”

“Legal Wives” starts airing this Monday night on GMA-7 right after “The World Between Us”.