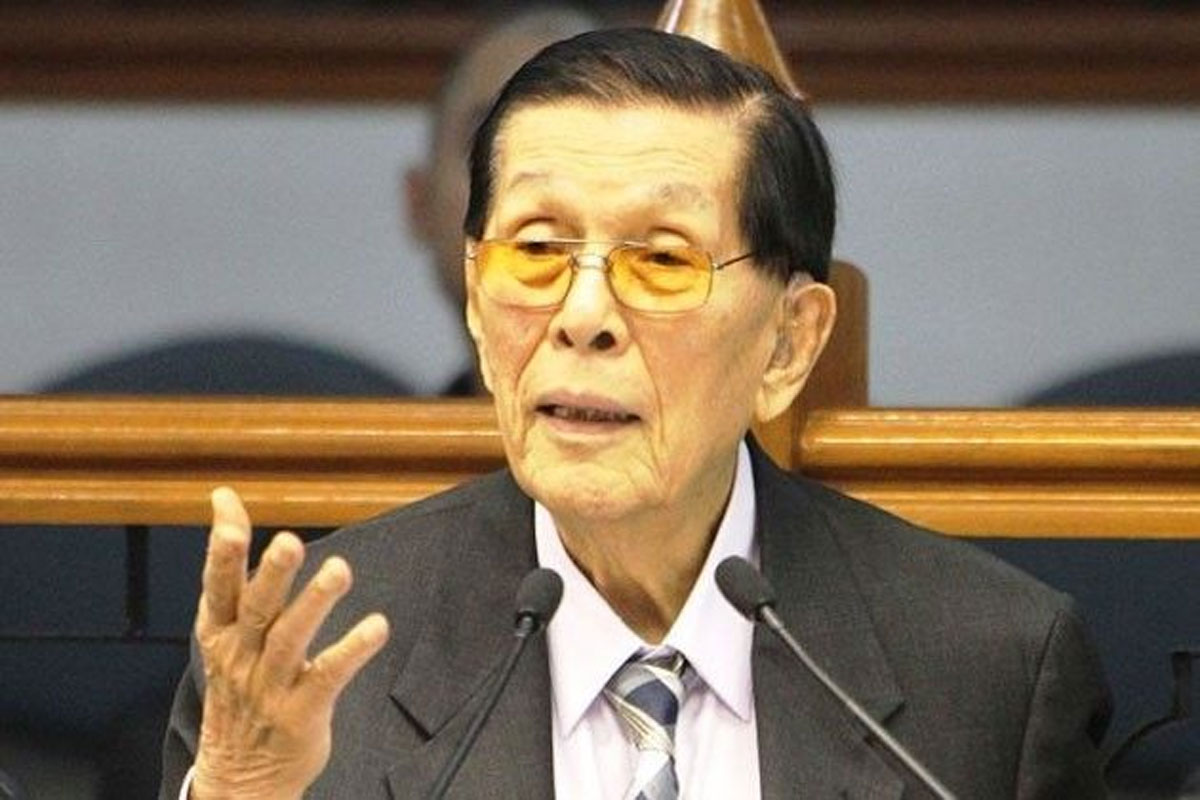 PARTIDO Federal ng Pilipinas standard-bearer Ferdinand ‘Bongbong’ Marcos, Jr. could not be held personally liable in connection with the alleged estate tax that his rivals are hurling at him.
Former Senate President Juan Ponce Enrile, pointed out that tax liabilities against the Marcos estate could not be transferred to BBM, especially as most of the assets are still subjects of litigation before the Supreme Court and the Court of Appeals.

Enrile, a known tax expert who finished his Masters of Laws degree at Harvard School of Law, specializing in international tax law, said that before the Bureau of Internal Revenue (BIR) could demand payment from BBM and former First Lady Imelda Marcos as administrators of the family estate, the issue should be decided first in the courts.

Reports earlier said, the Department of Finance has ordered the BIR to expedite the collection of the alleged P23-billion estate tax which had suddenly ballooned to P203-billion.

Last December, the BIR sent a letter to the Marcos heirs demanding the payment of the said amount for the tax due.

Despite the Supreme Court ruling of June 5, 1997 on the Marcoses’ estate tax liability, there are still pending criminal and civil cases against the family and its cronies before the high tribunal and the Sandiganbayan.

Meanwhile, former Internal Revenue Deputy Commissioner Edwin Abella said an estate executor and an estate administrator have separate and distinct personalities which is why the estate has a separate tax identification number (TIN).

“It means that the government or the BIR in particular just needs to go after the estate itself,” the tax law professor and bar reviewer stressed.

Abella pointed out that while the power to tax involves the power to destroy, citing the case of McCulloch v. Maryland 17 US 316 (1819) —Chief Justice John Marshall, tax laws must not be used as a weapon.

“Lady justice is blind, let us not use our tax laws like Damocles’ sword; taxation is not a weapon but rather our equitable contribution to a just and civilized society. Justice must always be tempered with compassion and mercy,” he said, adding that even President Rodrigo Duterte cannot reverse the decision nor preempt and make the decision himself because the tax code is clear on this.

Meanwhile,regional directors and district officers of the BIR nationwide have come out and declared that the heirs and administrators of the late President Ferdinand Marcos’ estate cannot be compelled or sued in court for tax evasion, even if they failed to pay the more than P203 billion tax assessment on the latter’s assets.

In what could be a direct rebuff to previous statements of former SC Justice Antonio Carpio and presidential wannabees Isko Domagoso, Manny Pacquiao, Leni Robredo and others, the BIR officials explained the estate tax is levied on real and personal properties of a dead person and not on the assets owned by his relatives.

To recall, Carpio and rivals of presidential frontrunner Ferdinand ‘Bongbong’ Marcos were all over the news in the past days, claiming that he and his relatives were accountable for not paying the P203-B estate tax, in obvious ploy to misdirect and paint him in a bad light and derail his imminent win in the fast-approaching scheduled May 9 elections.

“I can’t recall of any individual being sent to jail for non-payment of the said tax,” one of the regional directors said in an interview with Manila Bulletin.

The Supreme Court (SC) apparently agrees with the BIR official by saying that it is the estate which is liable to pay the taxes and not the heir or heirs.

“In the case of notices of levy issued to satisfy the delinquent estate tax, the delinquent taxpayer is the Estate of the decedent, and not necessarily and exclusively, the petitioner as heir of the deceased. In the same vein, in the matter of income tax delinquency of the late president and his spouse, petitioner is not the taxpayer liable.”

Furthermore, the officials explained that the proper thing to do under the Tax Code and revenue regulations is to seize and sell in public auction the properties of the deceased to settle the indebtedness.

“That is what we have been doing for years since the death of the former strong man, but the problem nobody was interested in buying them,” the official added.

The officials also answered allegations against them that the bureau has been negligent in collecting the said estate tax.

They added that when Marcos died in 1989 the revenue examiners fixed his estate tax debts at P23 billion.

The deficiency tax sharply rose to more P203 billion due to the one-time 50 percent surcharge and 20 percent yearly interest.

“It’s not a coincidence that rivals of presidential frontrunner Bongbong Marcos are raising this matter in unison a few weeks before the elections, sadly this is all about politics,” one of the BIR officials said.

Earlier, the camp Marcos assailed the “gutter politics” of his rivals explaining the said case is still pending in court.

“Our rivals are misdirecting everyone by claiming that the case has attained finality when the truth of the matter is, it is still pending in court and the ownership of the properties in litigation has yet to be settled,” said Atty. Vic Rodriguez, spokesman and chief of staff of Marcos.

“That being the case, the fair and just tax base to be used in computing the estate tax cannot yet be established with certainty,” Rodriguez added. With RPP and Jester Manalastas